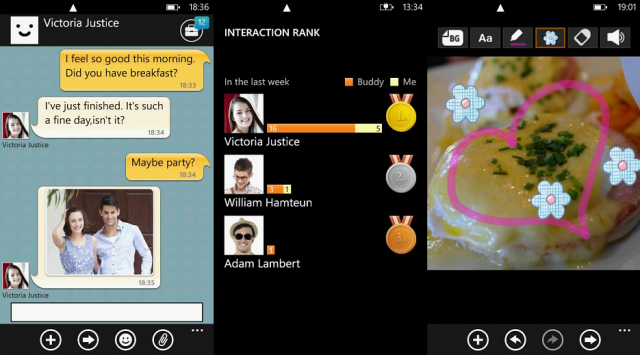 Samsung’s ubiquitous ChatON messenger, which attempts to bring together people not only in the Samsung sphere but on any smartphone across multiple platforms, has finally been released for Windows Phone.

ChatON is a lot like competitors WhatsApp, Kik, Touch, Hookt and others, but its biggest advantage is being pre-installed on millions of Samsung Android and bada phones. It’s also one of the few multiplatform apps available on almost every mobile OS: iOS, Android, BlackBerry and bada.

In addition to push messages you can send pictures, drawings, location details, contant information, voice memos, video clips, contacts and calendar entries. The Windows Phone interface is quite nice, utilizing the Metro UI without overdoing it.

Here’s the only (potentially big) issue: the app is only available on Samsung Windows Phone devices: in Canada, that pretty much limits you to the Focus. But hopefully Samsung gets it in their heads that making it available to everyone is the way to go. It seems strange, since the app is free to download for competing Android smartphones — why would it be limited to Samsung Windows Phones?

If you happen to have a Samsung Focus (or an unlocked Focus S) download ChatON from the Marketplace.