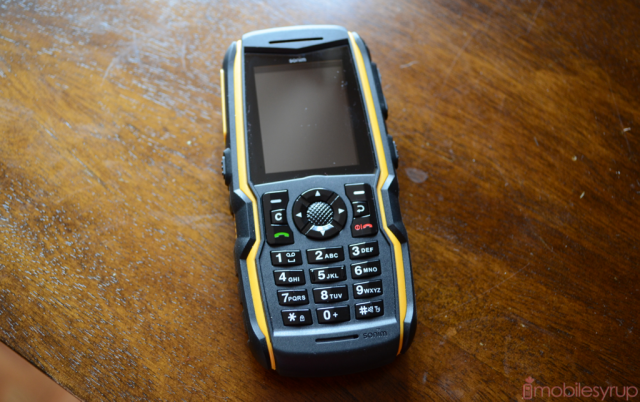 The Sonim Bolt is no ordinary cell phone. While it can’t be defined as a smartphone it makes up for it by being a strongphone, uncharacteristically robust in a market that often favours form over function. Bell is launching the Bolt as its flagship push-to-talk device alongside the retrofitted Samsung Galaxy S II and BlackBerry Curve 9360. Out of the three devices, it’s the only one that is guaranteed to stand up to the Canadian elements (which is why Sonim is launching the product here first) and has been created from scratch with PTT capabilities in mind.

At $99.95 on a three-year term, the Bolt is not necessarily aimed at you or me. But for the truck driver, construction worker or basically any business that formerly relied on TELUS’ deprecated iDEN network, the Bolt is going to change lives. Let’s take a closer look.

The Bolt is not a pretty phone, but it has its own sense of style. The fierce angles, yellow accents and messy symmetry scream “rugged,” which is exactly what the Bolt is going for.  Its incredibly thick chassis makes it one of the toughest phones in the world.

Like all Sonim products, the Bolt abides by the company’s Rugged Performance Standards qualifications, which means that it is practically indestructible. The video embedded above should provide sufficient proof of that, but there are some other aspects of the Bolt that makes it especially attractive as a workhorse phone. 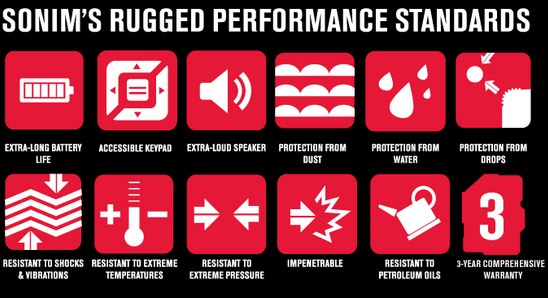 First, it cannot be punctured; you can take an axe to the phone and it’s unlikely to make a dent. It’s impervious to extreme pressure and temperatures, making it perfect for mining work. For those who work outdoors, it is dust-, shock- and water-proof and scratch resistant. It will not be damaged by liquid or oil; it is incredibly loud, able to be heard above the din of sustained construction work. And, if you do break it for whatever reason, the company will replace it no-questions-asked in the first three years.

The phone’s layout is fairly simple: it has a standard number pad near the bottom of the phone, with a set of Call, End, Menu and directional buttons above. All these buttons are wonderfully responsive, and are guaranteed not to break for the life of the phone. On the left side is the dedicated push-to-talk button, and on the right is a camera button/flashlight; hold down the button to activate the flashlight, and press it once while the screen is on to open the camera app. There is a 2MP camera on the back side of the device.

Ports are interesting on the Bolt, since CEO Bob Plaschke claims that the traditional microUSB port is too difficult to ruggedize, opening the phone up to weakness. Instead, they opted to use a port similar in size to a 3.5mm headphone jack, which converts to a USB cord on the other end. This can be used to charge the phone or plug it into a computer for data transfer. The flashlight is incredibly bright, and can be used in place of a traditional torch in an emergency.

The screen measures 2-inches and has a relatively low 240×320 pixels, but its main advantage is a 2mm thick piece of Gorilla Glass that is all but impervious to breaks. 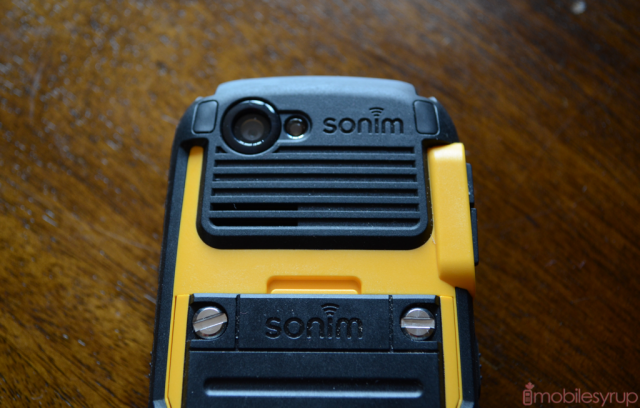 Push to Talk and Talk and…

One of the most attractive features of the Sonim Bolt is its one-touch deployment and activation of push-to-talk. Bell is rolling out a data-based service that provides sub-one second call initiations, and millisecond response times, all over its well-established HSPA+ network. This provides speeds up to 7.2Mbps (on this particular phone, 21Mbps in general) making the Bolt a far more versatile device than any iDEN product ever was.

The button on the left side of the device activates the push-to-talk function, connecting to Bell’s data network. The PTT list is separate from your main phone book, allowing IT departments to distribute number lists easily. You can easily see who is or is not online based on a green icon next to the person’s number. As opposed to traditional phones, there is no “ring” when calling someone; it beeps just like a walkie-talkie. I found call quality to be remarkably good, better than any VoIP call. It’s clear that Bell has prioritized the traffic here to ensure minimal latency with a very high quality audio codec.

The other aspect of the phone that allows for seamless calling mostly anywhere is that its relatively thick housing incorporates much larger antennas than most smartphones; I had five bars of Bell signal in areas that my various Android phones could only muster one or two.

The Sonim Bolt is not a smartphone. Nor is it trying to be. Plaschke assured us that a rugged Android Sonim phone is coming soon, but in the meantime the Bolt is powered by a lightweight, responsive Java-based operating system that does the basics and not much more.

It comes with “apps” such as Bell’s Telenav-powered GPS Navigator (separate monthly charge) as well as a rudimentary WAP browser that we’d recommend staying away from unless you have a very high tolerance for frustration. It has a music player, calendar, calculator and a number of other “tools” you’d find on most low-cost phones today. 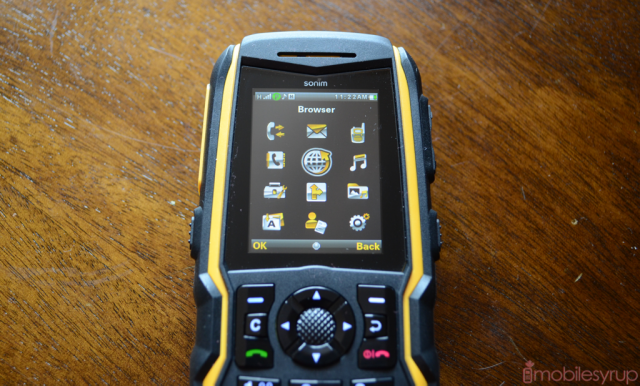 The Bolt comes with a huge 2000mAh battery that promises nearly over a month of standby time. Talk time is a massive 12 hours, and PTT uptime is even longer. It’s unlikely you’ll be charging the Bolt every day, nor every second day. If you end up using it as a “regular” phone, barring hours-long conversations it will probably last a week before having to be recharged.

Call quality on the Bolt, through either the incredibly loud speaker or the headpiece, is about as crisp as I’ve ever heard on a phone. Perhaps it’s because Sonim focused on making the Bolt a phone first but it speaks, ahem, volumes about how far down the list call quality has become to smartphone vendors. 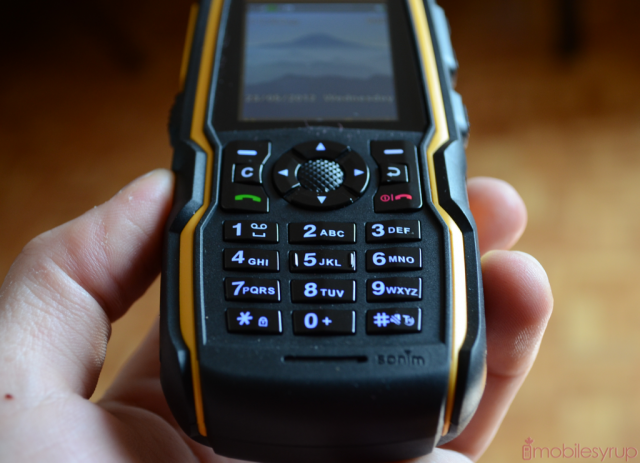 Last year, the Sonim XP3300 Force was declared the “Toughest Phone in the World” by the Guiness Book of Records, a feat that was accomplished by dropping the phone 25 metres/82 feet onto concrete with no operational damage whatsoever.

It has also been submerged in an antifreeze mixture, embedded in concrete and, most impressively, almost blended. 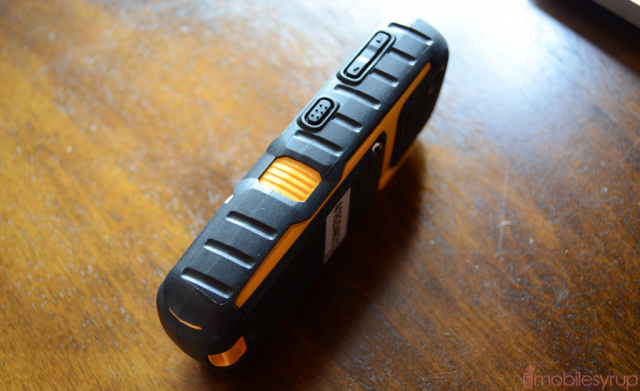 The Sonim Bolt is not for everyone, nor is it for most people. But there is a huge unspoken subset of Canadians that work in dangerous environments that could benefit from the Sonim Bolt, and from Bell’s new Push-To-Talk network.

For more information, check out the Sonim Bolt at Bell Mobile Business.