Google files for “Showy” trademark, allows your mobile phone or tablet to act as a remote control 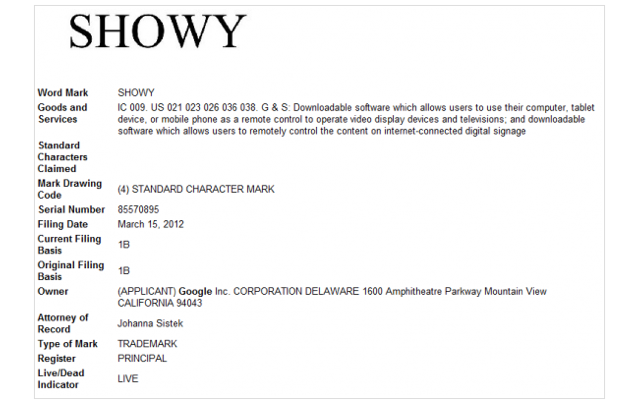 Looks like the trend these days are to have your smartphone, tablet or other mobile device act as a remote control. We’ve seen various apps attempt this in the past, remember Unify4Life, more recently RIM added this update with BlackBerry Bridge version 2.0.0.25.

Google seems to be hopping on board the remote train. They recently registered a domain by the name of GoogleShowy.com (domain does not load). Now the search and Android giant has registered a trademark with the United States Patent and Trademark Office called “Showy”. Serial Number 85570895 was originally filed on March 15th under the category of goods and services and states that Showy will be some sort of downloadable software, probably an app, that will make mobile phones, tablets and computers act as a remote control.

Google has not yet announced anything to do with “Showy”, but earlier reports had also pegged them creating a voice activated remote control – similar to Apple’s Siri – that would specifically interact with Google’s cloud services, via Android phones and/or tablets.