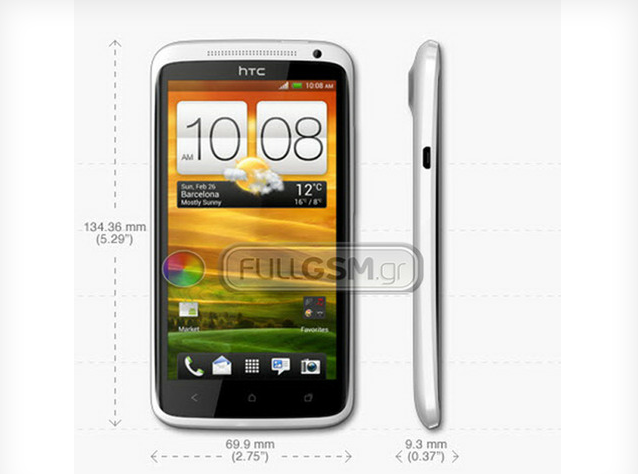 The barrage of leaked documents and photos continues, and this one is of the upcoming HTC flagship, the One X. Greek site FullGSM has found official-looking press shots and a spec sheet, summing up much of what we already believed to be true.

The One X looks great, with a true continuation of the last few generations of HTC designs. It bears a passing resemblance to the Amaze, but is slightly slimmer at 9.3mm. It also has that camera bulge we liked/disliked in the Desire HD, and from the front it could pass for the Sensation’s more mature brother.

Its final production appearance will include three capacitive touch buttons which adhere to the Android 4.0 design playbook: Back, Home and Multitasking. Internally, the One X has a 1.5Ghz quad-core Tegra 3 processor, 1GB RAM, 32GB internal storage and an f2.0 8MP backlight illuminated camera sensor with “dual shutter” capabilities. This means you can take a photo while recording 1080p video, something yet unseen on an Android phone.

Rumours of Dropbox integration appears to be true, with 25GB of free storage for 2 years for anyone who signs up from the device. This is going to be a huge selling point, as Dropbox is a popular service already used by millions of people, and integrates already into many existing apps with its API. The 1800mAh battery is a bit small for our tastes, and it does not appear to be replaceable, though we’ll have to wait for confirmation of that.

The showstopper still appears to be the 4.7-inch 1280×720 Super LCD2 display with “2.5D” Corning Gorilla Glass. The same nomenclature was used to describe the slightly convex glass of the Nokia Lumia 800, so we’re looking forward to seeing that in person.

Obviously this could all be fake, but so close to HTC’s press conference at Mobile World Congress, we’d bank on the leaks being real. We’ll bring you the official announcements when they come.

Source: FullGSM
Via: The Verge