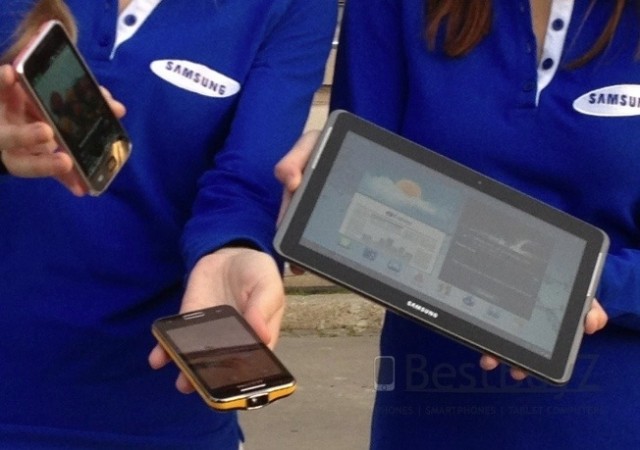 While we know that Samsung won’t be announcing the long-awaited Galaxy S III at Mobile World Congress this week, it appears they will be launching at least one tablet and two phones. A German blog named BestBoyz has obtained photos of a tablet dubbed the GT-P5100 which it purports to have a high definition screen running Android 4.0 with TouchWIZ.

It’s unlikely this is the rumoured iPad 3 competitor Samsung is expected to launch later this year with a large 11.6-inch 2560×1600 pixel display and the dual-core 2Ghz Exynos 5250 processor, as the model number is lower than the current crop of tablets; the Galaxy Tab 10.1 is the GT-P7500, for reference. The tablet shown in this photo bears a striking resemblance to the re-done Galaxy Tab 10.1N, the product of a lawsuit lost to Apple in Germany, which claimed Samsung was adhering too closely to the design of the iPad 2.

The two handsets in the picture also look to be of the low- to mid-range variety, with smallish screens and coloured backings. With the conference beginning tomorrow, we’ll know more and then some.