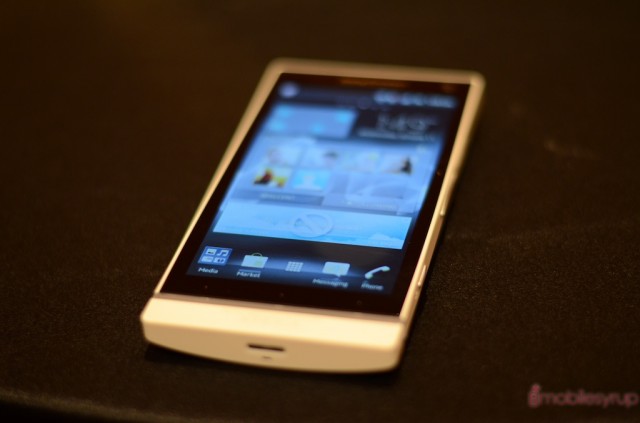 Aside from the Nokia Lumia 900, which hasn’t been announced for Canada yet, the Sony Ericsson Xperia S was my favourite handset of CES 2012. And I saw a lot of handsets.

A lot has been made of techs and specs, the so-called Android social climber: you either have them or you don’t. Sony Ericsson nee Sony has always been a few months behind the rest of the pack, choosing to release the single-core Xperia arc, Play and ray series at a time when everyone was launching dual-core Android handsets. Say what you will about Sony’s alterations to Android, but it’s difficult to argue that those devices were not extremely fast when they came to market, at least in terms of experience.

The Xperia S is modeled on that same approach: optimizing the software for the hardware, rather than the other way around. Running Android 2.3.7 with an eye to Ice Cream Sandwich in Q2 2012, the Xperia S feels unbelievably smooth. It’s also taken a page from the Nokia Lumia series in that it’s moulded out of a single piece of high-density polycarbonate, a move away from most other manufacturers. It feels substantial in the hands without being slippery or fey. 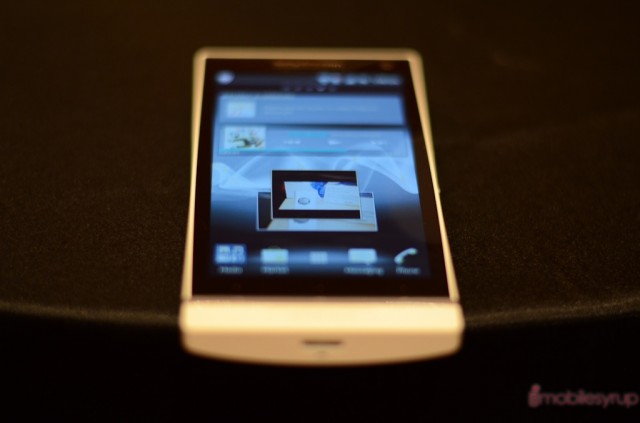 The 4.3-inch 1280 x 720 pixel screen is absolutely stunning. This is no PenTile display but a true wide viewing angle, deep black and true white LCD. It incorporates Sony’s Bravia Engine like its arc predecessor but also fuses the LCD to the glass (which may be Gorilla Glass, we need to confirm this) for fewer reflections.

Its design is a fairly contiguous evolution from the arc; though thicker, it reveals a consistency with the rest of the Sony line of products with its monolithic appearance when off, and its “light bar” below the screen that acts as a finder, an accompaniment to the touch area just below the display. According to Sony representative Trevor Fernandes, that area also encompasses the phone’s various antennas, keeping them out of reach of your hand’s potential attenuation. 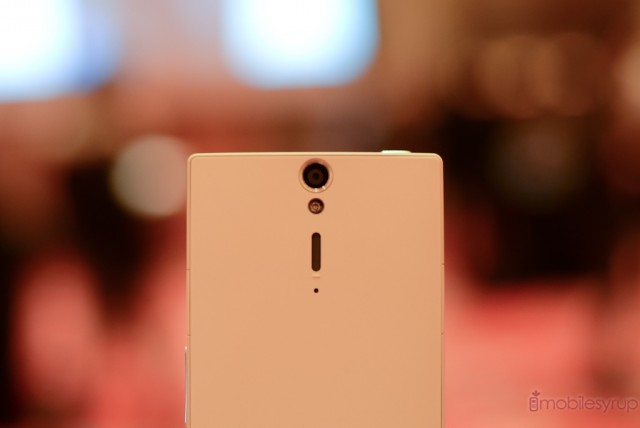 On the back is a whopping 12-megapixel camera which can be accessed, even when the phone is turned off, via the right-side button. This is by far the fastest phone camera I’ve ever used. As we showed you, it can go from zero-to-shutter in less time than a Galaxy Nexus, and despite not having the same “instant shutter” feature, its photo quality is worlds ahead.

Though the dual-core processor will likely be enough to sustain its speed for at least a generation, it’s disappointing to hear that it is a Snapdragon S3 chip being used, and not one of Qualcomm’s more efficient S4 chips. My disappointment extends to the lack of LTE in the Xperia S: that is saved for the Xperia Ion which is launching exclusively on AT&T (though it was hinted that it may come to Canada in Q3). The chip inside the Xperia S should support 21Mbps download speeds, but we’ll confirm that when we get a review unit.

A couple cool extras: its flat bottom allows it to stand up on its own; there is a mini HDMI port on the left side; the 1830mAh battery is non-removable; the Xperia S uses a microSIM.

Right now we can’t comment too much on the software because it will likely be heavily altered and optimized before its March release, but from what I could tell it was pretty smooth. There will be Video Unlimited support bundled with the device, and the Xperia S is also Playstation Certified, so it will have access to a growing number of PSOne games.

We’ll bring you lots more of the Xperia S when its release date and carrier availability are announced for Canada in the coming months. 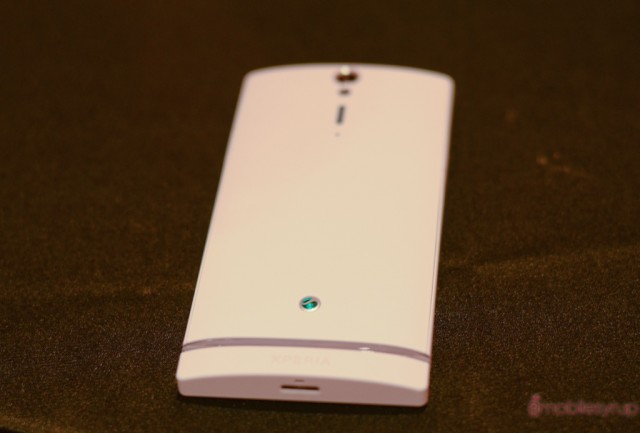 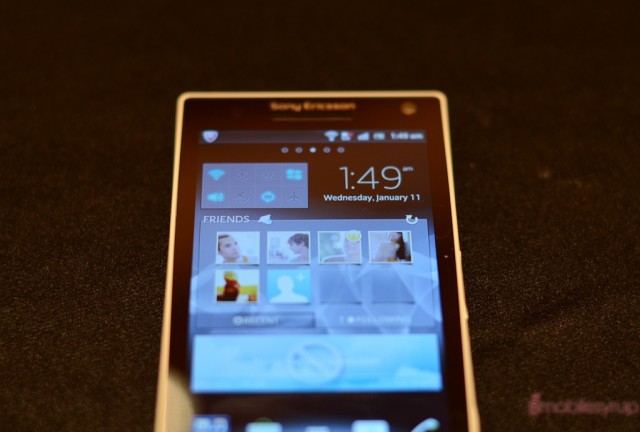 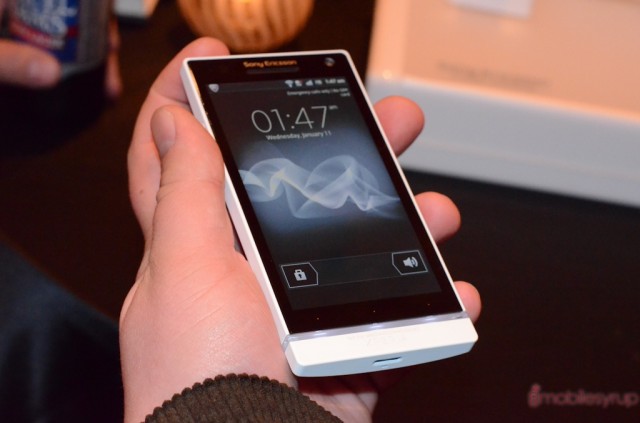 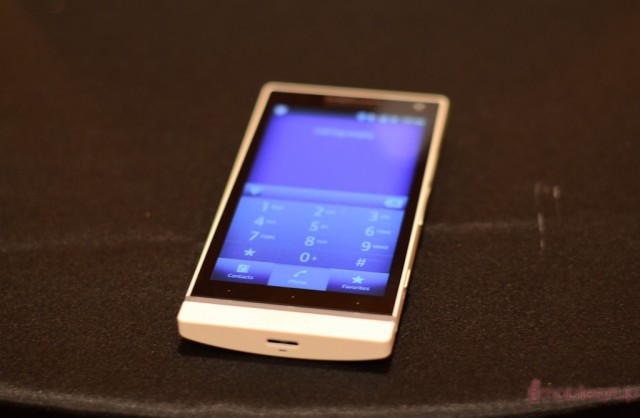 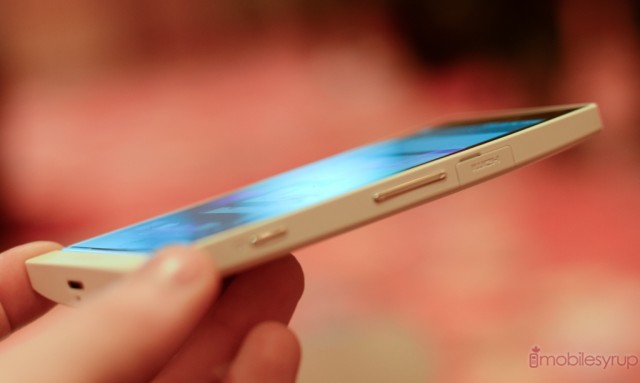