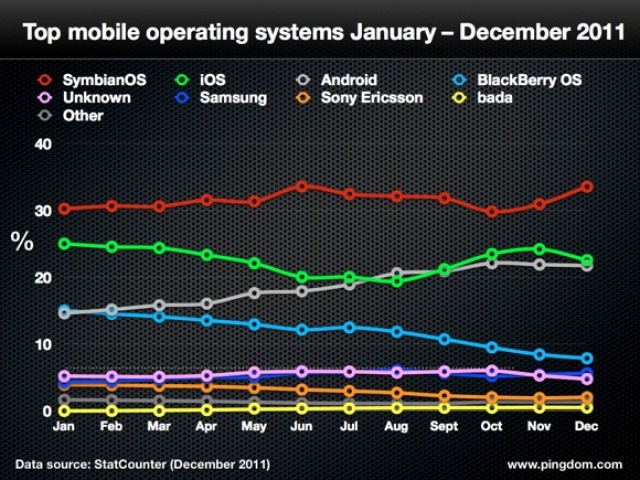 If death and taxes are the only certainties, they’d be followed closely by the slow atrophy of Symbian’s market share going into 2012. Except the exact opposite seems to have happened to Nokia’s intractable operating system.

According to Pingdom, an analytics company that covers mobile phone trends, Symbian began the year with 30.25% of the world’s share, and ended it with 33.52%. Certainly the increase was from its proliferation into dual-SIM and low-income markets such as India, Africa and South America, but nonetheless the death of Symbian has been greatly exaggerrated.

Apple stayed flat for the year with 22.63% market share, which means it’s still the “bigger” OS compared to Android, but the trend looks to see Google passing Apple in that respect in the next month or so.

And Windows Phone? Not even on the list. Sad news for Microsoft, but since these are worldwide tallies and WP7 doesn’t offer low-cost options of their devices, it makes sense we’re not seeing them represented in large numbers.

It will be interesting to see what 2012 brings us in terms of mobile share. We can’t wait to find out!