Android users love Facebook, and Angry Birds is popular regardless of age: Nielsen 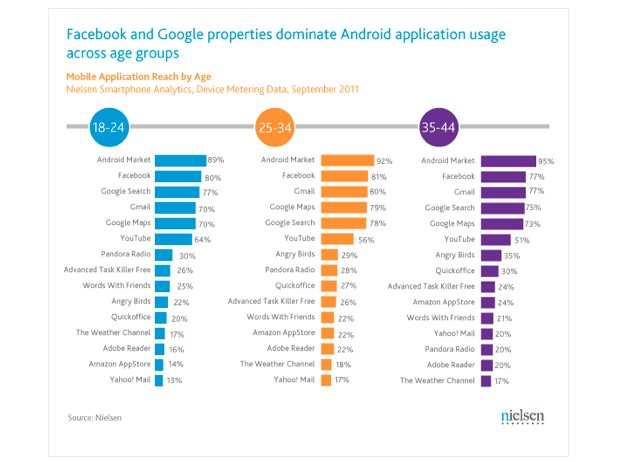 It appears that regardless of how old you are, you love Facebook. That is the takeaway we are getting from some interesting data put together by Nielsen research today. Though the data is derived from US-based Android users in the month of September, we’re pretty confident that Canadian users have similar usage patterns. Nielsen found that Facebook’s app is used, on average, more often than even Google’s own first-party options.

In the 18-24 age range, Facebook is used by 80% of users compared with 77% for Google Search and 70% for Gmail. This is interesting data considering how ugly and bug-prone Facebook’s app has been until recently.

It also does not take into account what kinds of skins are being used by each Android user: Facebook is tightly integrated into phones such as the HTC Status and Sony Ericsson’s Xperia line, which would undoubtedly sway the results.

As ages increase, only several apps seem to change positions: Angry Birds is played by 35% of those aged 35-44, while only 22% of 18-24 year-olds partake. Use of Quickoffice, the word processing and spreadsheet app bundled with most Android devices, increases with age while YouTube, it would seem, decreases from 64% to 51% between the three age groups.