Tablets, according to the latest Gartner report, are continuing to surge in adoption. This year manufacturers have flooded the market by offering every size possible: 5, 7, 8.9 and 10-inch have all been produced. Apple has the iPad, Samsung has the Galaxy Tab, LG has the Optimus Pad, HP has/had the TouchPad, RIM has the PlayBook, Sony has the S1 and HTC has the Flyer… so many options to choose from. Gartner states that sales will increase this year to total 63.6 million units, up 261.4% from last year, and on pace to hit 326.3 million units by the end of 2015.

Apple has the lions share of the market, but those who have tablets running on Google’s Android OS are slowly taking a piece of the pie. The report says by the end of this year the iPad is estimated to take 73.4% market share, down almost 10% from last year. Making up the rest are all the other tablets to which Gartner says they do not “expect any other platforms to have more than 5 percent share of the tablet market in 2011”. In fact, the report suggests that tablets running on Android will only sell 11 million units this year, compared to the iPad at over 46 million. But there’s hope, even for RIM. Gartner suggests that by the end of 2015 RIM’s PlayBook, powered by QNX, will have sold 26 million units, Android with 116 million and Apple, still leading with 148 million units sold. 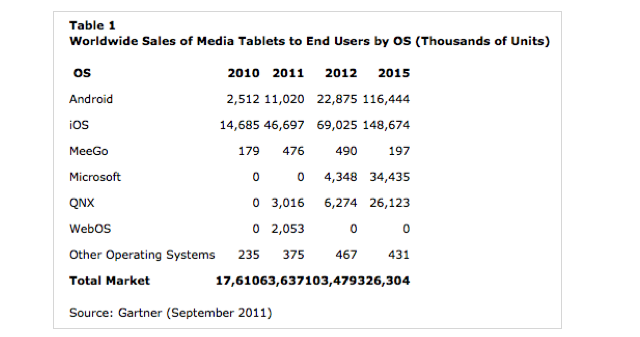 Carolina Milanesi, research vice president at Gartner, said “We expect Apple to maintain a market share lead throughout our forecast period by commanding more than 50 percent of the market until 2014. This is because Apple delivers a superior and unified user experience across its hardware, software and services. Unless competitors can respond with a similar approach, challenges to Apple’s position will be minimal.”