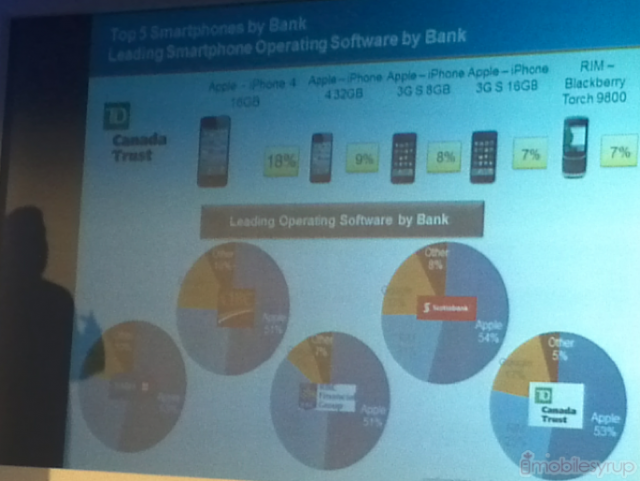 Research firm comScore came out with some Canadian mobile stats a couple months back, all based on March 2011 numbers. At the time they stated that “12.3 percent of Canadian mobile subscribers accessed banking. During the CWTA Wireless Showcase comScore presented some updated numbers and the trend continued – mobile usage is increasing. You can see some of the previous stats we posted here, mainly about OS market share and how Apple, RIM, HTC and Samsung are all battling it out.

Using your mobile device as a “wallet” will be an everyday experience in 2012, some are adopting it early and doing the basic transactions or using a mobile banking app. comScore stated that since March “Mobile Baking is up 21%”, leading to believe that 33.3% of mobile subscribers use a mobile banking app (based on 20,111,000 subscribers). The most used mobile app is TD Canada Trust with 26%, followed by RBC (21%), CIBC (16%), BMO (10%) and Scotia Bank (10%). Not surprising, Canadians use iOS and the iPhone the most to access their account and perform basic functions, followed by RIM and the BlackBerry OS, specifically on the Torch 9800 (touchscreen/QWERTY keyboard) and Google’s Android OS is creeping up in popularity. 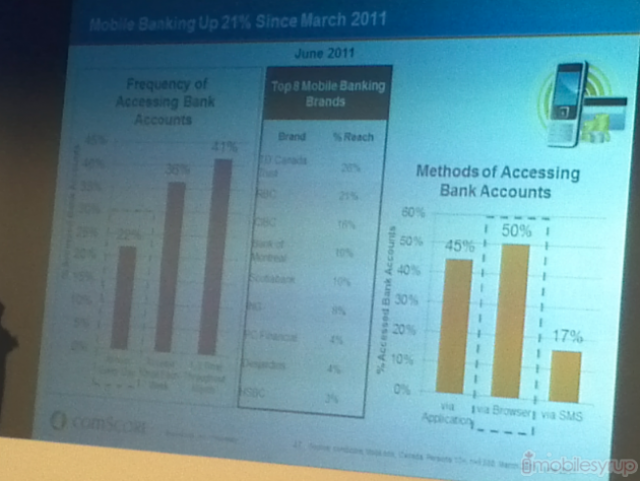