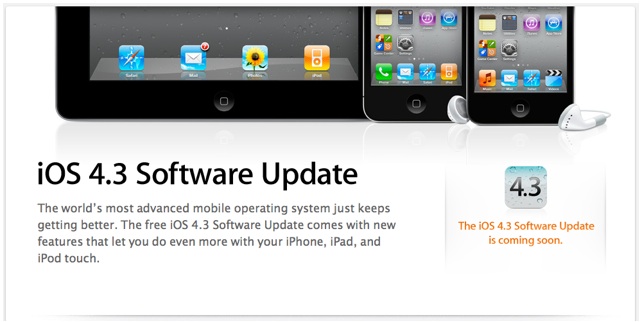 During the iPad 2 event today Apple stated that iOS 4.3 will be available March 11th. This update brings new features such as faster browsing via Safari, new Photobooth app, enhancements to AirPlay, iTunes Home Sharing and the much talked about Personal Hotspot feature that that lets you connect up to five devices via Wi-Fi (it’ll only work on the iPhone 4). In addition, iOS 4.3 is compatible with these devices: iPhone 3GS, iPhone 4, iPod Touch 3rd & 4th generation, iPad and iPad 2.

As for Canadian carriers, it’s expected that all of them will enable the Mobile Hoptspot. Today Rogers stepped up and said yes they’ll make it available to their customers. On Redboard, Rogers stated that “Mobile hotspot on iOS 4.3 will be enabled on the Rogers network and will follow our current tethering policy. This feature will be available at no additional charge for Rogers and Fido customers who subscribe to data plans of 1GB and above.”