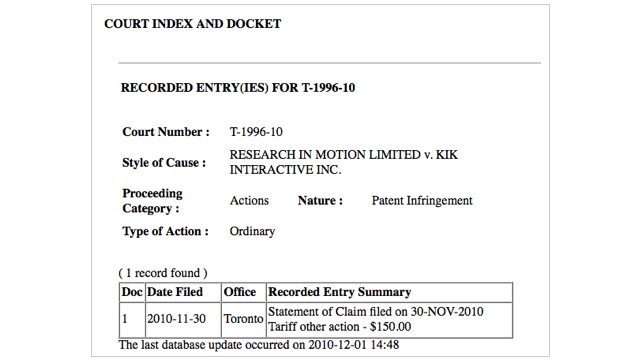 RIM has served papers to the once popular BlackBerry messaging service app Kik for patent infringement. Kik Messenger rapidly climbed to over 2.5 million users in a month but was kicked out of the BlackBerry App World and also had their developer privileges, basically shunning them from existence. The reason RIM stated was for “breaching contractual obligations”… but most likely it has to do with the similarities from their messenger to the RIM’s BlackBerry Messenger. Both services show the user when a message has been sent, delivered, read and responding.

So two Canadian companies seem to be going at it. RIM filed a patent infringement lawsuit against Kik. No word yet on what specifically is involved but Kik has responded in a press release stating that “RIM’s Legal Action is Unjustified and Disappointing… Kik intends to vigorously defend the lawsuit brought by RIM. As the matter is before the courts, no further comment will be provided by Kik at this time. ”

Update: The case goes beyond patent infringement. It seems it has to do with BBM and that Kik CEO Ted Livingston actually worked with RIM on 3 different occasions, directly helping to develop BBM. Under the RIM confidentiality agreement Livingston wasn’t supposed to profit from his experience at RIM, hence the lawsuit. In addition, Kik had plans to create a music platform that’s embedded into their messenger – the same thing RIM is doing with BBM.

And finally, there is the issue of privacy. RIM states in the filing that “Among other things, the Defendant and the Kik Application, unlawfully and without providing necessary notices or obtaining necessary consents, transmitted BlackBerry end users’ personal information, including personal information from their address books, to the Defendant’s servers. The Defendant then stored that information on its servers and used the personal address book information to unlawfully transmit unsolicited messages (SPAM to individuals, without obtaining the necessary consents of the end users.”

Check out the full documents here