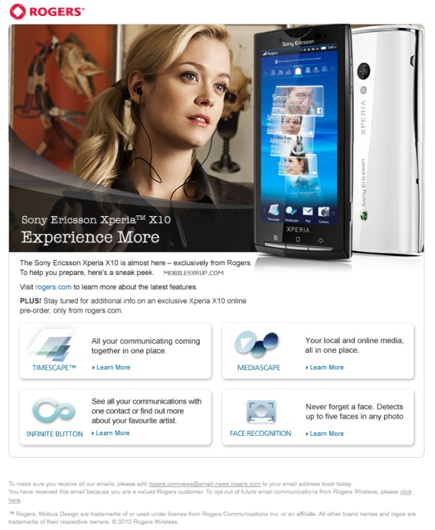 Rogers announced that they will be the exclusive Canadian carrier to launch the Android-powered Sony Ericsson XPERIA X10. The date that they stated was sometime in the second quarter, we hear it’ll be within a few weeks now. In our Forum, member Bikram states that the launch date is set for April 14th.

We had the opportunity to get a hold of the X10 for a quick demo, this will come with OS 1.6 but Sony Ericsson confirmed that it will be upgradable. There are also rumours of the price point coming in at $199.99 on a 3-year contract when it becomes available.

More news today as Rogers sent an e-mail to those who registered for updates and said “The Sony Ericsson Xperia X10 is almost here – exclusively from Rogers… PLUS! Stay tuned for additional info on an exclusive Xperia X10 pre-order”. So not only is the X10 “coming soon”, but it’s “almost here” and we can almost pre-order it.

In the meantime you can check out the almost pre-order site here at Rogers.