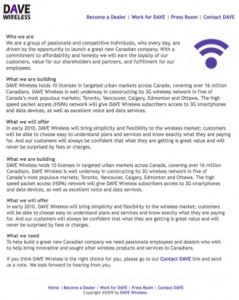 The “experience” Dave Wireless (or the upcoming new brand name) will offer is one step closer. They have announced an licensing agreement with Bell Mobility for wireless cell-site sharing (reaches 93% of Canadians). This will make things a great deal easier for them and can knock another item off their to-do list… hopefully we’ll hear a confirmed launch date sooner than later, and other than “early 2010”.

Dave Dobbin, President of DAVE Wireless said “With the upcoming launch of DAVE Wireless, our ability to gain access to valuable real estate on Bell Mobility’s existing cell sites moves us another step closer to offering competitive voice and data services to Canadians. By using existing infrastructure built by Bell, we can greatly quicken our time to market in the fast-paced wireless industry.”

During the Wireless Spectrum Auction DAVE invested $243.1-million for 10 licenses. Other notable advancements over the past couple months are that they’ve signed a roaming agreement with T-Mobile and announced an exclusive multi-year contract with Ericsson to design and build their 3G UMTS network in Toronto, Vancouver, Calgary, Edmonton and Ottawa.