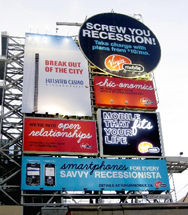 With so much talk about the economic crisis and companies letting go of hundreds of people, Virgin Mobile Canada is boldly declaring “Screw you recession!”.

In true Virgin style they have already started to get the word out for an upcoming advertising campaign by occupying a 15-storey billboard by Toronto’s Eaton Centre. In addition, print campaign with posters will be distributed in Toronto, Calgary, Edmonton, Vancouver and Montreal. More importantly, a website will be created to try and shift our perspective on the recession called: www.screwyourecession.com.

Nathan Rosenberg, Virgin Mobile’s chief marketing officer said “We want to be on their side, by not being afraid of the “R” word”. (This is certainly in line with the recent drop in price plan rates this week)

It seems every month Virgin is continually doing some sort of new study, the latest found that 41% of consumers have given up a brands they love. Only 1,500 were surveyed but Andrew Bridge, Director of Brand and Communications said “this core group hasn’t gone through such economic change or turmoil before… Seeing their friends laid off, or the way their own employers are treating them differently, has had a big impact on the way they see things”. 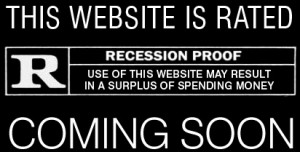 This is where Virgin comes in for the superhero persona. In this “economic uncertainty” the ScrewYouRecession site will be a forum for people to express themselves and share tips on how to save money. The end goal is to have us Canadian consumers to switch to Virgin when our contracts are up for renewal. “From the mobile standpoint we want people, when their contracts come up, to look at us and say, oh, here’s someone who gets what I’m going through,” says Mr. Bridge.

Some feel the language used in this advertising initiative is really risky for Virgin, but remember they’ve always pushed the boundries. Point in case, last years “You Call the Shots” print ads that targeted US politicians Hillary Clinton, Elliot Spitzer and now President Barack Obama.

Good on you Virgin. Keep it up.