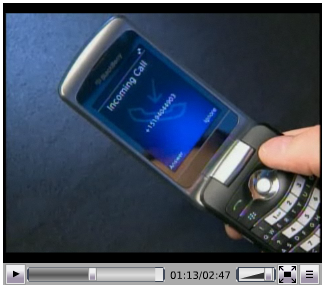 After many pics and reviews Rim has officially launched the BlackBerry Pearl 8220 Flip phone. We know that this will be available at Rogers soon for $149.99 (and in the US on T-Mobile). However, to temp us until it we can actually buy it… a dedicated site for the flip located here. In addition, a video can be seen also, just click on the image.

Here is some info from the press release:

“The quad-band EDGE based BlackBerry Pearl Flip smartphone presents a sophisticated look with a sleek design and a chrome-finished frame surrounding its smooth, luminescent face. Packed with an abundance of powerful features, it weighs only 3.6 ounces and measures approximately 3.9” x 1.9” x 0.7”.  Featuring two high-resolution, light-sensing color displays, the external LCD makes it easy to preview incoming emails, text messages and phone calls without opening the handset, while the large, 240 x 320 internal LCD displays messages, videos and web pages with impressive detail and contrast.

“The popularity of BlackBerry smartphones has grown tremendously around the world and the introduction of this exciting new flip phone will help extend the reach of the BlackBerry platform even further,” said Mike Lazaridis, President and Co-CEO, Research In Motion. “The BlackBerry Pearl Flip is a full-featured smartphone with a unique and friendly design and it is a natural choice for flip phone users who want to start doing more with their phone than just talk.”