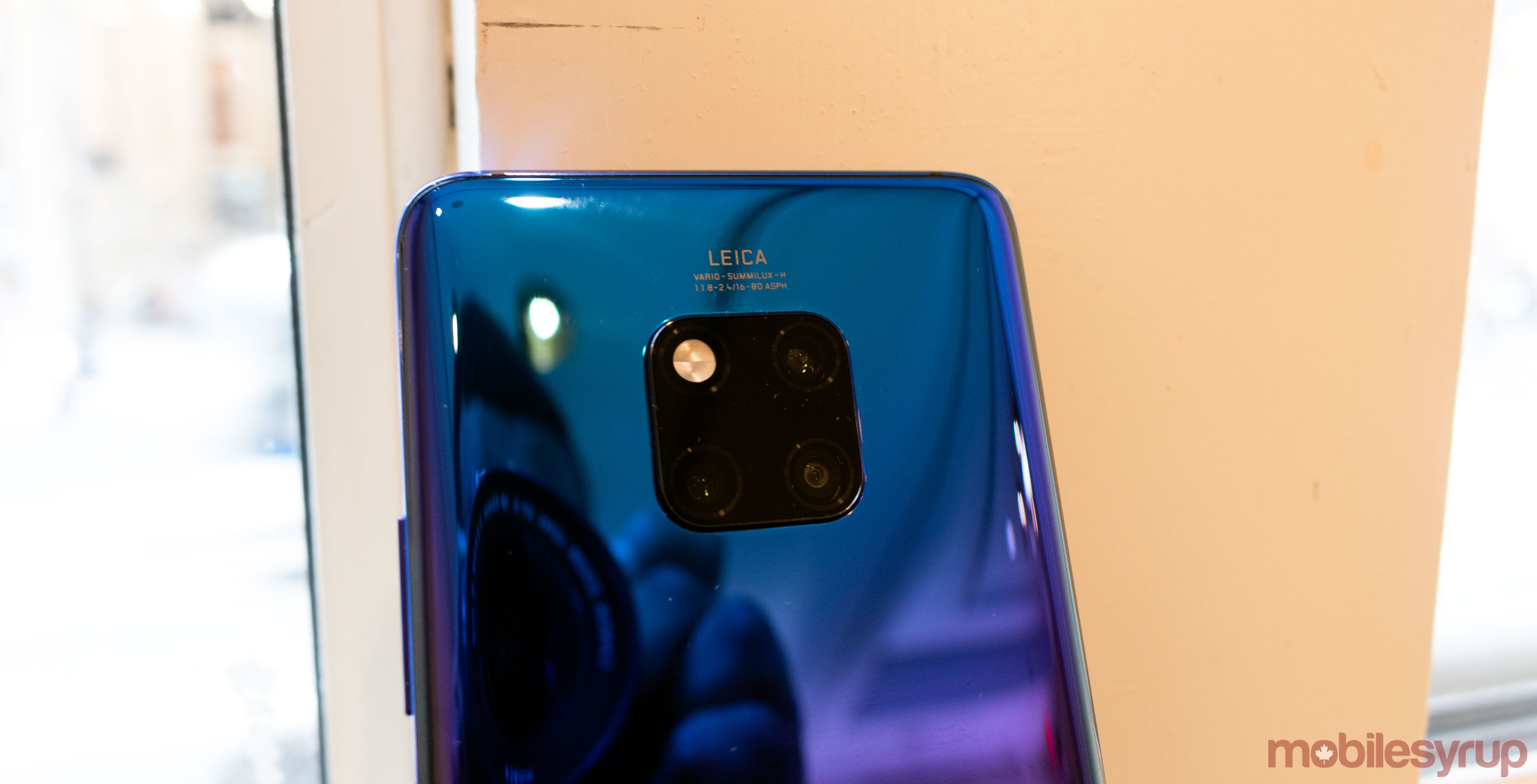 According to Peter Gaudin, global senior product marketing manager at Huawei, the Mate series is for those who understand tech and want to use it to enrich their lives. If that’s you, the Mate 20 Pro might be the handset you’ve been waiting for.

MobileSyrup had the opportunity to go hands-on with the device shortly before today’s announcement. Read on to find out our initial impressions of the device.

The Mate 20’s in-display fingerprint scanner is the phone’s most interesting feature, especially when considering the Canadian market. While the Mate 20 likely won’t be the first smartphone to feature the technology — the OnePlus 6T will beat it to market by a mere couple of days — it’ll be the most accessible since OnePlus doesn’t sell its handsets in brick and mortar stores.

The scanner uses a dynamic pressure sensor that unlocks the phone once a user applies a slight amount of pressure to the panel. The company also included a function that recognises when a user’s hand is slightly above the screen. When the device senses a hand, it displays a little fingerprint indicator, so users know where to place their finger.

Huawei gave us the opportunity to test out the in-display fingerprint scanner on site.

Setting up the feature felt more difficult than it does on a regular fingerprint scanner. It wanted me to be very exact, putting specific parts of my finger on the display to get an accurate reading.

At first, it felt odd to place my finger on a display to unlock the device, especially in a specific spot. When I finally entered my biometrics, the scanner worked impressively quick.

However, it didn’t feel as natural as a regular fingerprint scanner. 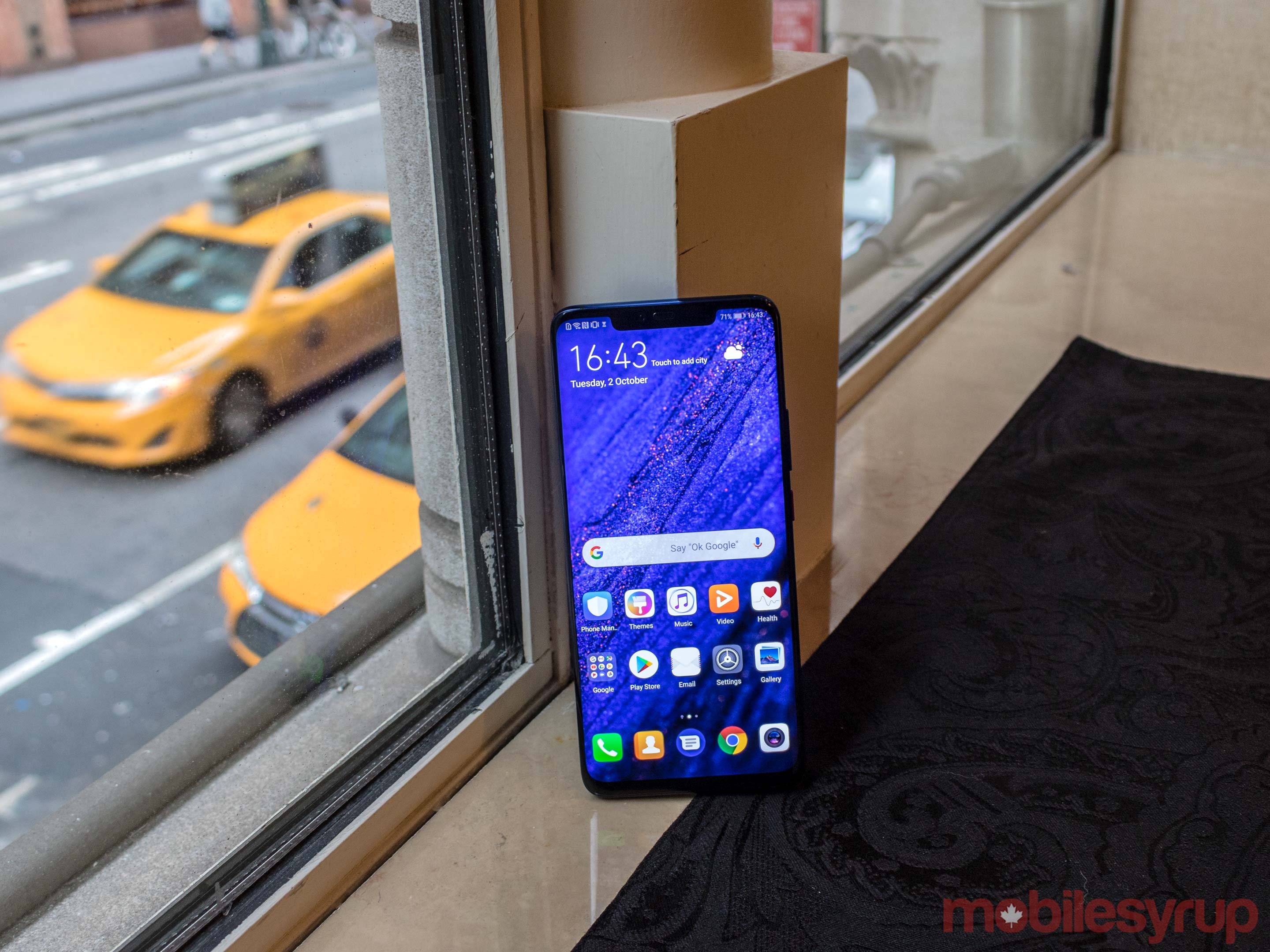 Usually, when I take a phone with a fingerprint sensor out of my pocket, the screen is unlocked by the time I’m looking at the display. With the Mate 20 Pro’s in-display scanner, I had to peek at the screen to make sure I positioned my finger in the correct location.

I’m hoping with more time I’m able to use the sensor as fluidly as a regular fingerprint scanner.

Similar to Apple, Huawei has stacked 3D facial recognition hardware into its notch. The Mate 20 Pro uses an infrared camera, flood illuminator, a dot projector, and a time of flight proximity sensor. 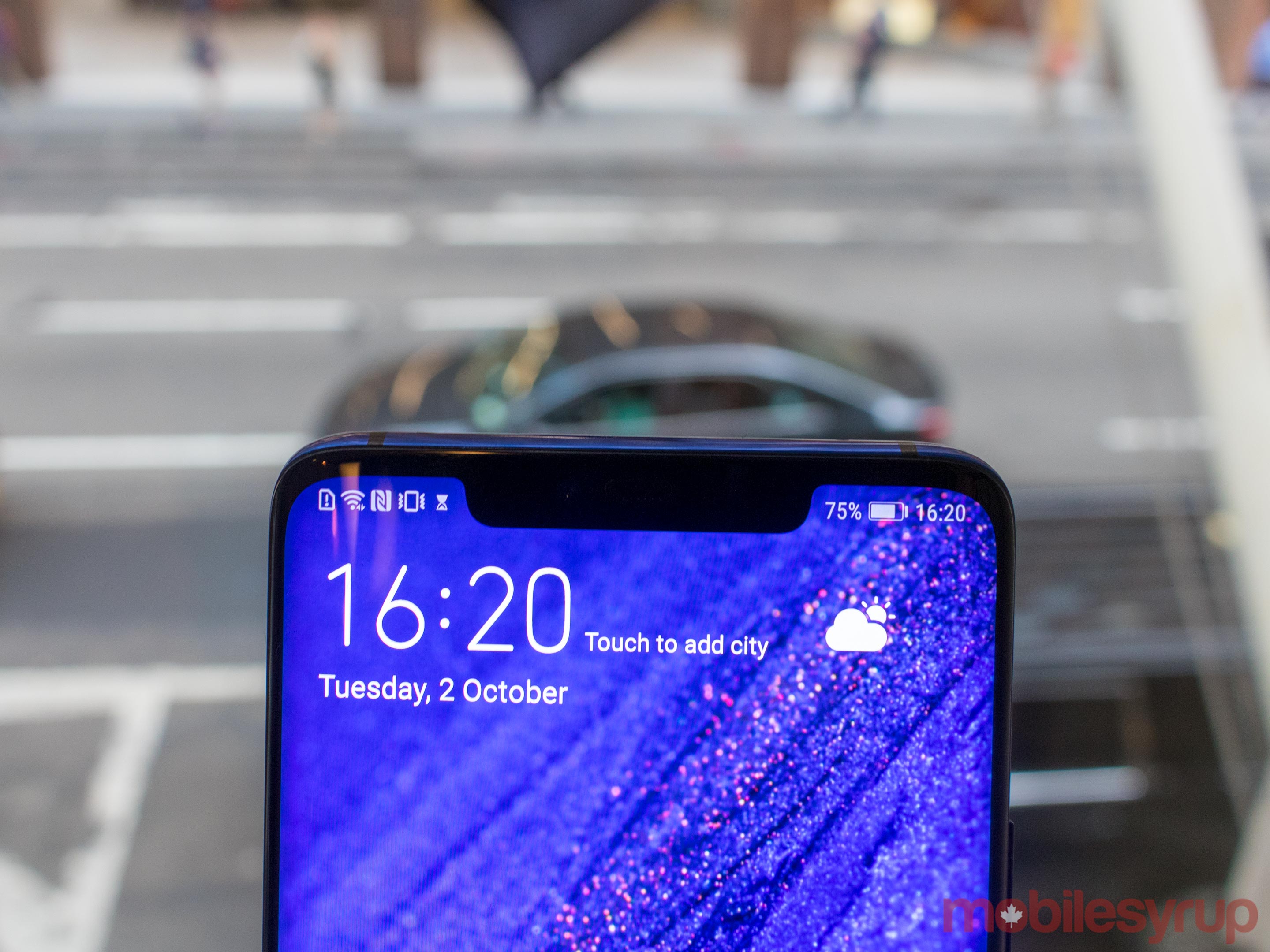 Huawei also gave me the chance to test out the 3D Depth Sensing camera.

With the time I had with the phone, the feature worked incredibly quick. On several occasions, when I went to use the Mate 20 Pro’s in-display fingerprint scanner, I looked at the display in order to know where to place my finger, only to have the facial recognition software acknowledge my face and immediately unlock the device.

It’s difficult to say if Huawei’s implementation was any quicker than other phones with the technology, but I want to take a deeper look and perform more tests in my full review.

For those who want to keep their phone apps protected from family members and friends. Huawei gives users the opportunity to lock apps and documents with their fingerprint scanner or the phone’s facial recognition. That said, I didn’t get a chance to test this feature. 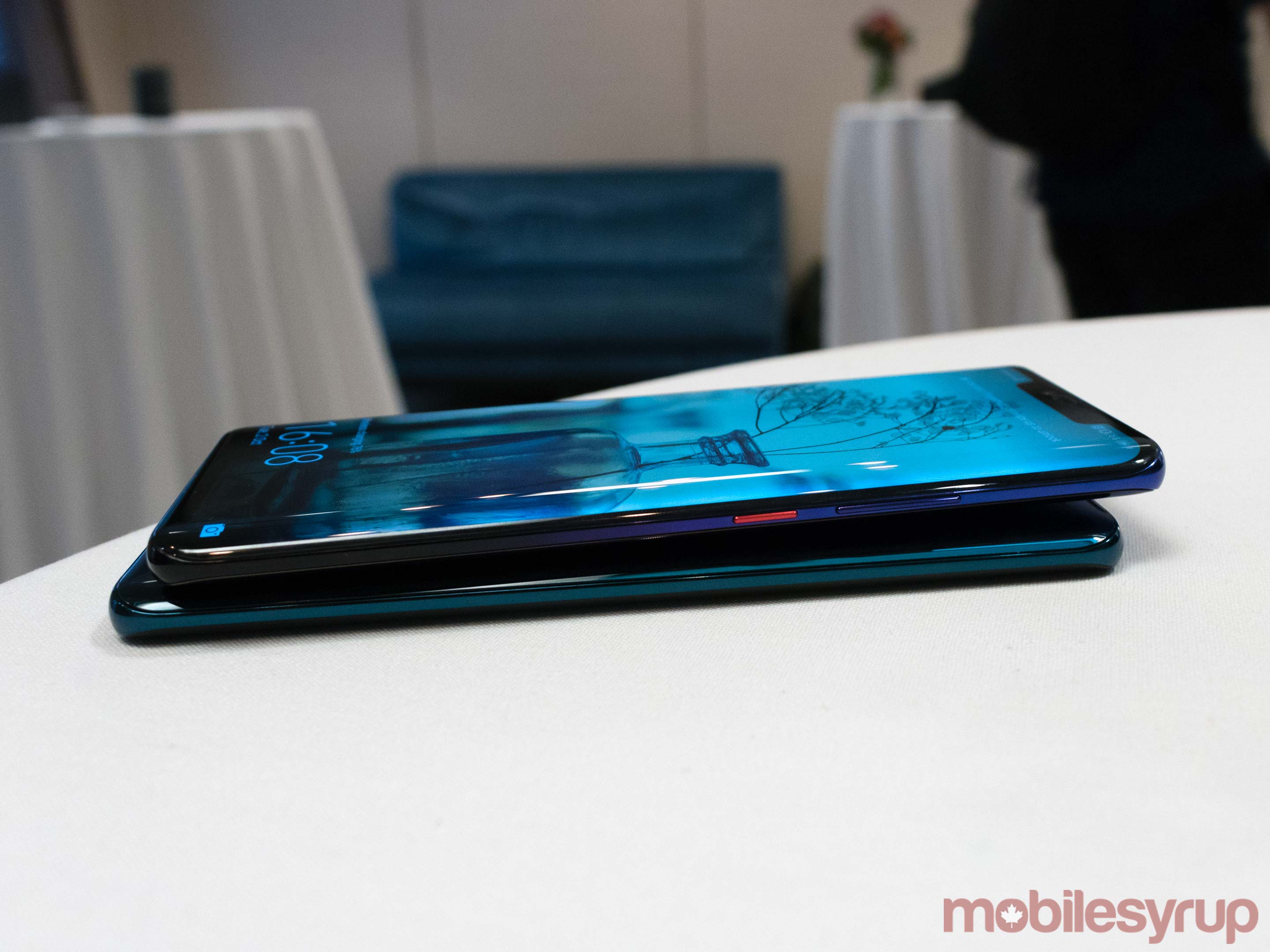 While I didn’t get the chance to test out the device’s massive 4,200mAh battery, I did try the handset’s unique charging feature, not seen in any other mainstream device, reverse wireless charging.

The Mate 20 Pro can wirelessly charge any other Qi-compatible wireless product.

Huawei didn’t speak to how much the Mate 20 Pro could charge other devices this way. It likely depends on a case to case basis. 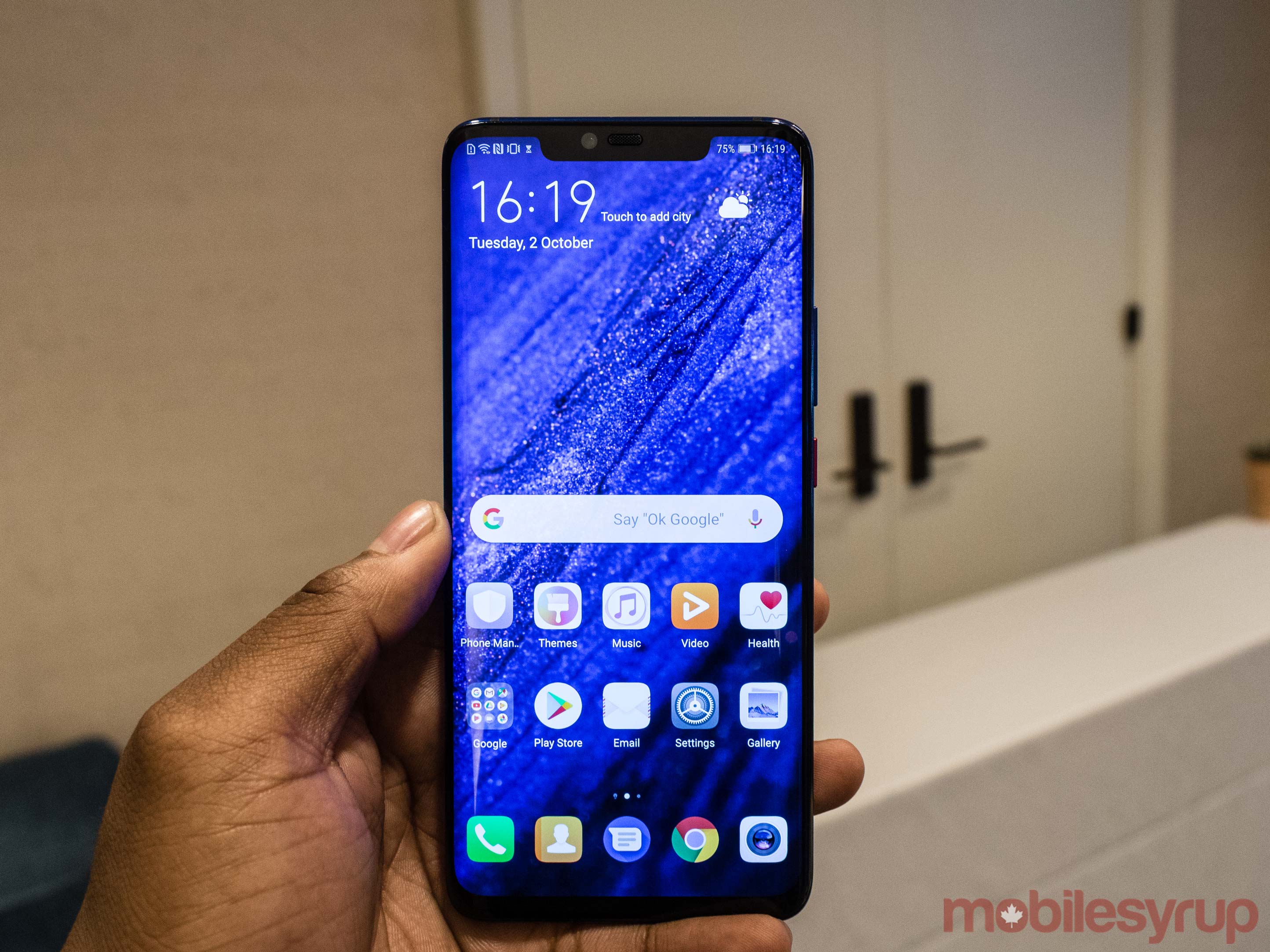 Unfortunately, I didn’t have a Samsung handset to compare side-by-side with the Mate 20 Pro. But without a doubt, the panel looked just as or even nicer than Samsung’s display — although I understand beauty is in the eye of the beholder. 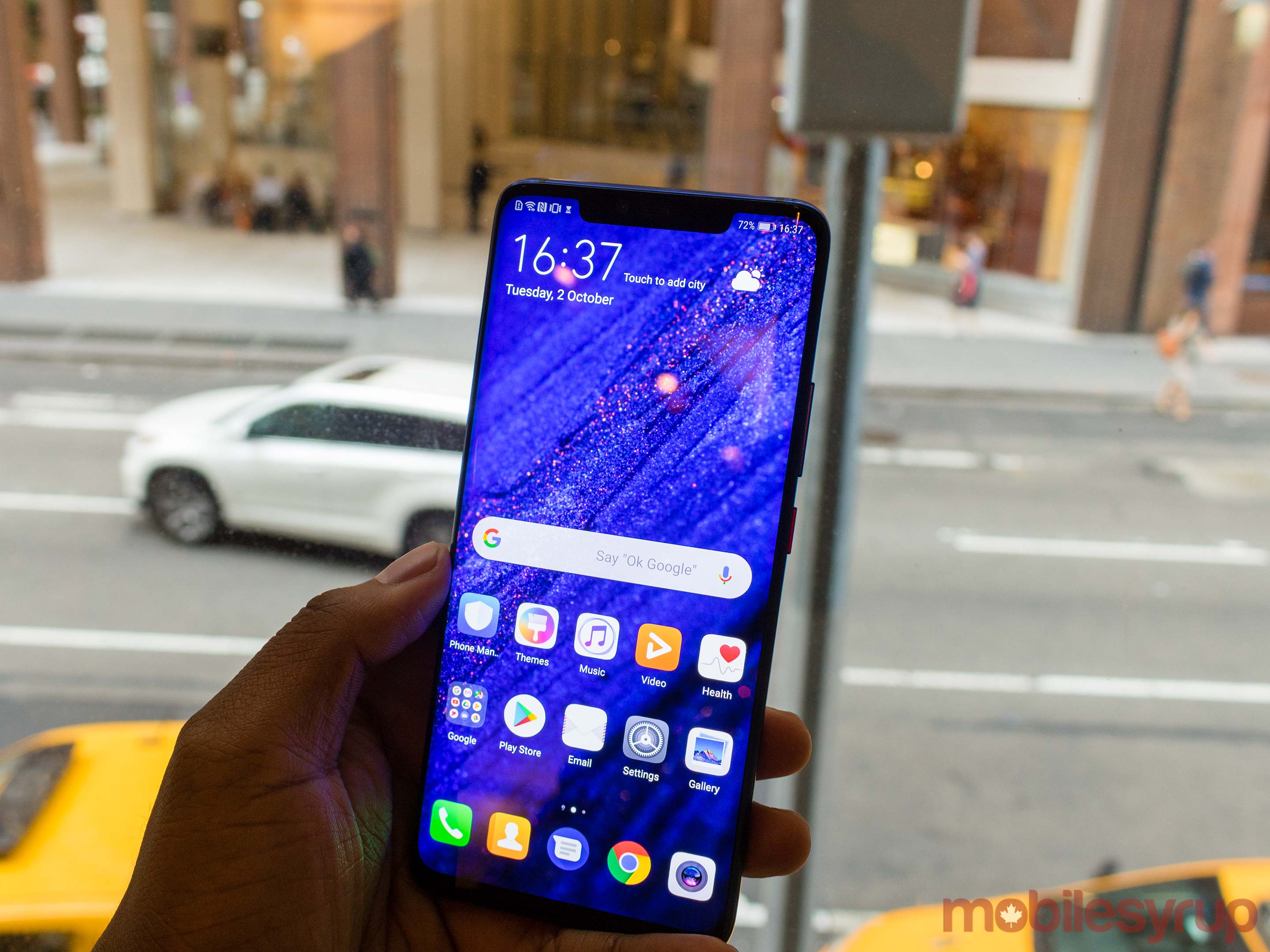 The handset sports a 3,120 x 1,440-pixel resolution — only two other smartphones available in Canada — the Sony XZ Premium and the Sony Z5 Premium–  support a higher pixel resolution.

Combined with a vibrant OLED panel and an edge-less curved display, the phone’s screen is one to beat.

While my initial impressions of the display are quite high, I’ll hold my verdict as I didn’t get the opportunity to compare the phone to Samsung’s Super AMOLED or Apple’s Super Retina panel, nor did I have enough time to try out any video streaming applications. 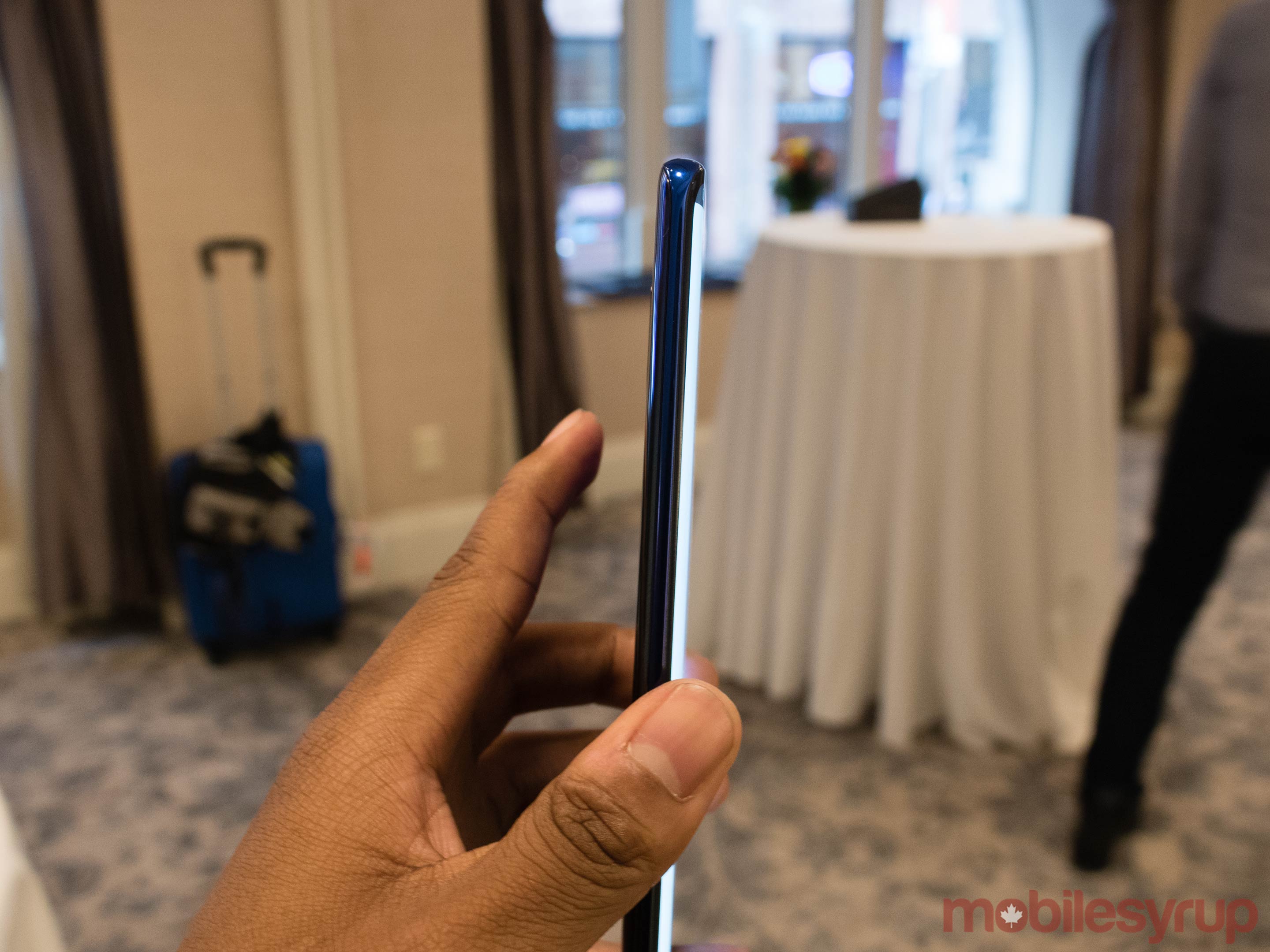 The Mate 20 Pro looks premium, and even with its 6.39-inch display, it doesn’t feel too large.

Huawei was able to keep the phone smaller in size, because of the combination of an iPhone X notch and edgeless bezels, making it feel smaller than other smartphones of the same size, like the 6.4-inch Galaxy Note 9 and the 6.3-inch Pixel 3 XL.

While I like Huawei’s combination of the two features, I can see this as an issue for many consumers. Some people find the iPhone X notch hideous, and others have concerns with curved panels. But if you’re like me, you’ll enjoy the handset’s appearance and display. 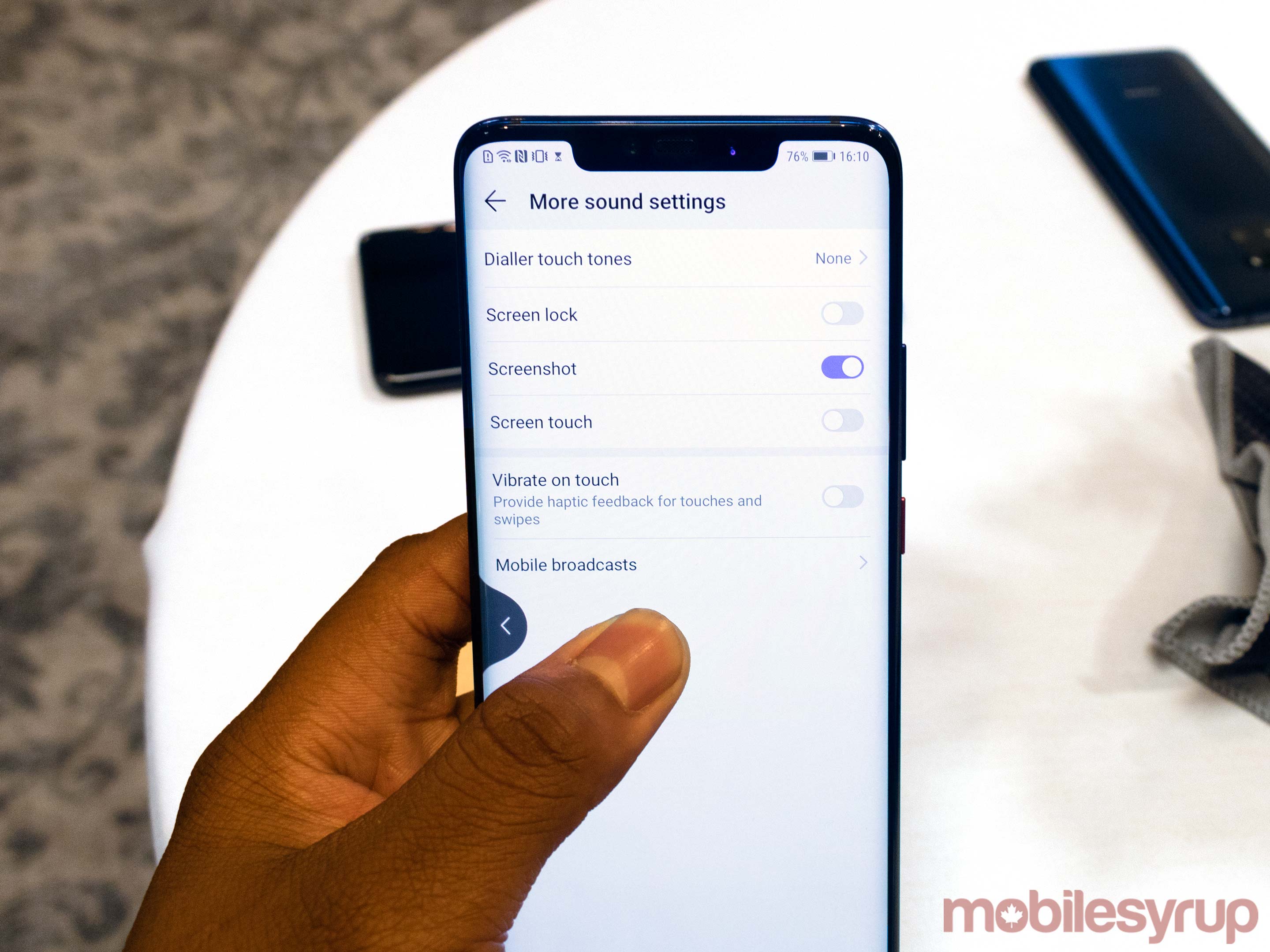 I would like to dig deeper into EMUI 9 based on Android 9 Pie. While at first glance it looks more straightforward to use, it’s definitely still a dense skin.

What I found immediately fascinating is the phone’s gestures and how it uses the edged display.

What’s new, however, is to go back users will swipe from the edge of the screen, and an arrow will appear. When that arrow appears, users will need to keep pulling, and the phone will go back within the application. While the process is a little odd at first, after a few minutes, it became quick and seamless. 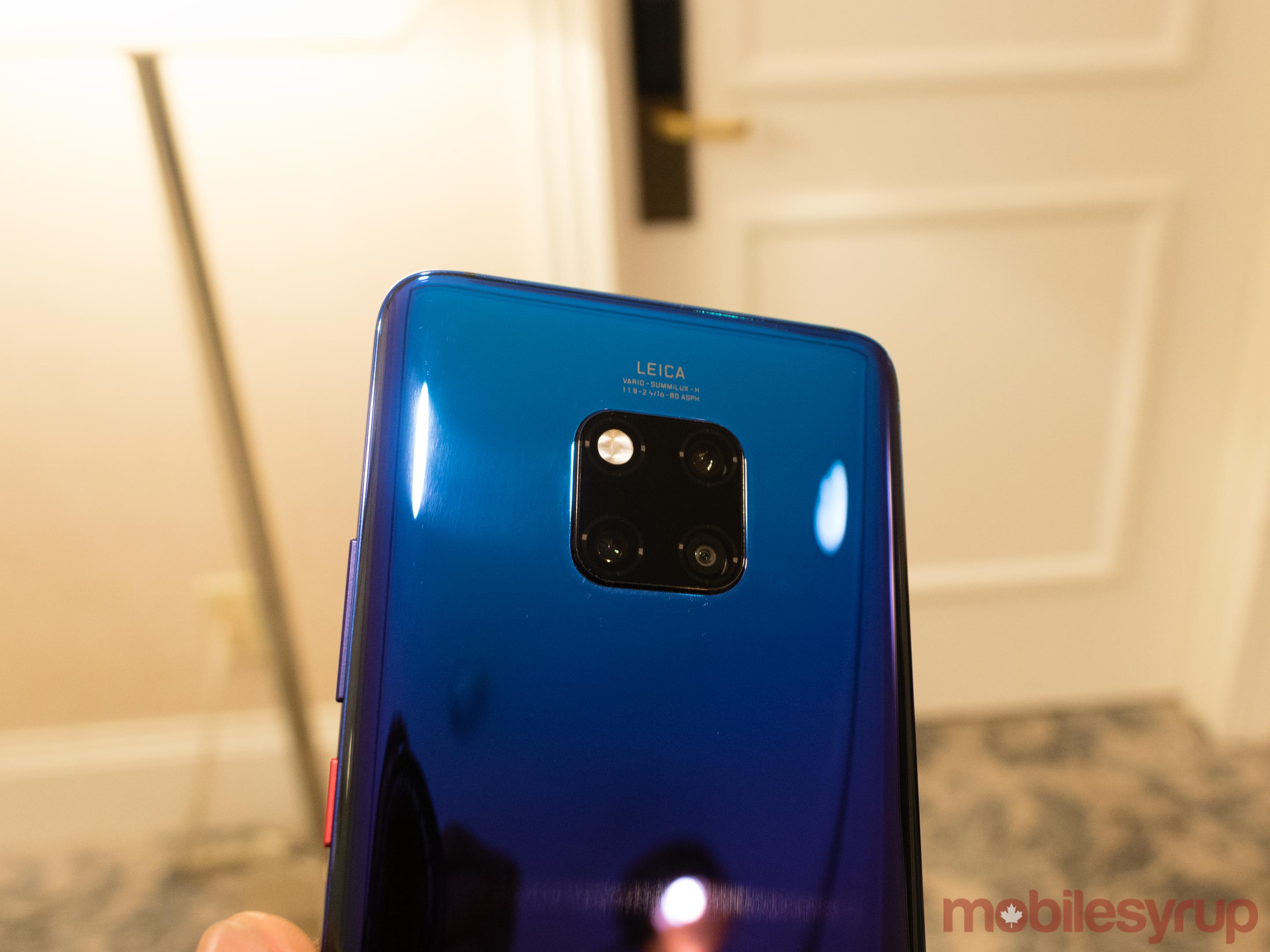 Huawei’s Mate 20 Pro seems to produce clear and well-detailed pictures, though I’ll hold my judgement for my complete review after I spend more time with the phone.

One of the Mate’s three cameras features a 20-megapixel sensor with a wide-angle lens with a 107-degree field of view and a f/2.2 aperture.

I noticed this when I was trying to take a picture of a street in New York. The phone automatically changed to the wide-angle lens but gave me the option to switch it back with a single tap. 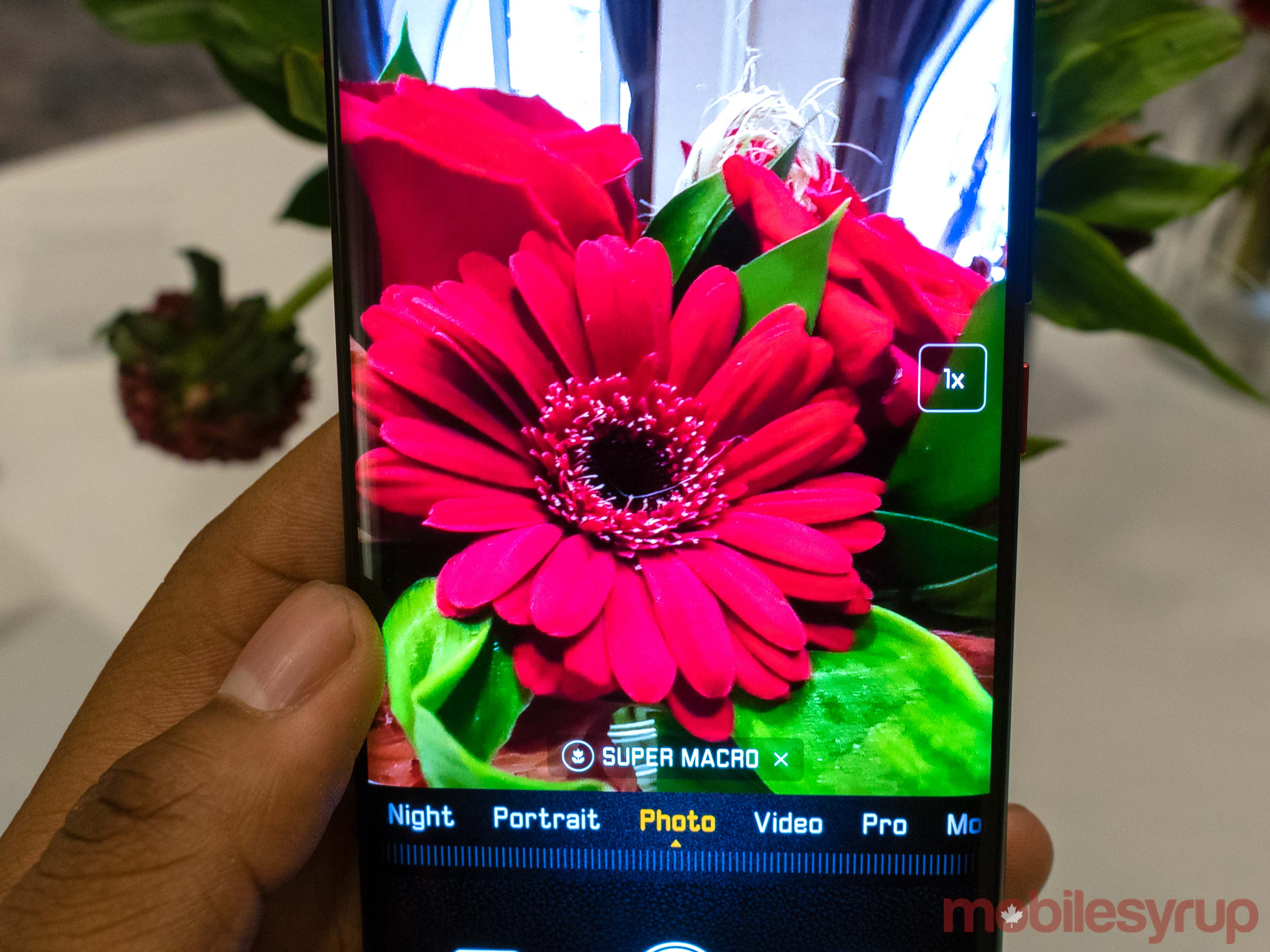 It also did this in order to get macro pictures. For example when I was taking close up pictures of flowers the phone was able to recognize the proximity to the object and show a close and more detailed picture.

The camera also includes a feature called ‘Portrait video.’ While this mode is enabled the captured footage will show a grayscale on everything except the main subject, that’ll show in full colour. This process seemed smooth, and it recognized when the subject moved around or if it came within the frame.

The Mate 20 Pro is a new challenger that brings an in-display fingerprint scanner, an ultra-wide angle camera, wireless charger, curved display, and 3D depth sensing camera within an iPhone X-style notch. I’m not sure how much of a hit it will be with Canadian consumers, but the phone is impressive.

In Canada, the phone is to launch in black and twilight only. Huawei will announce Canadian pricing and availability on October 25th.