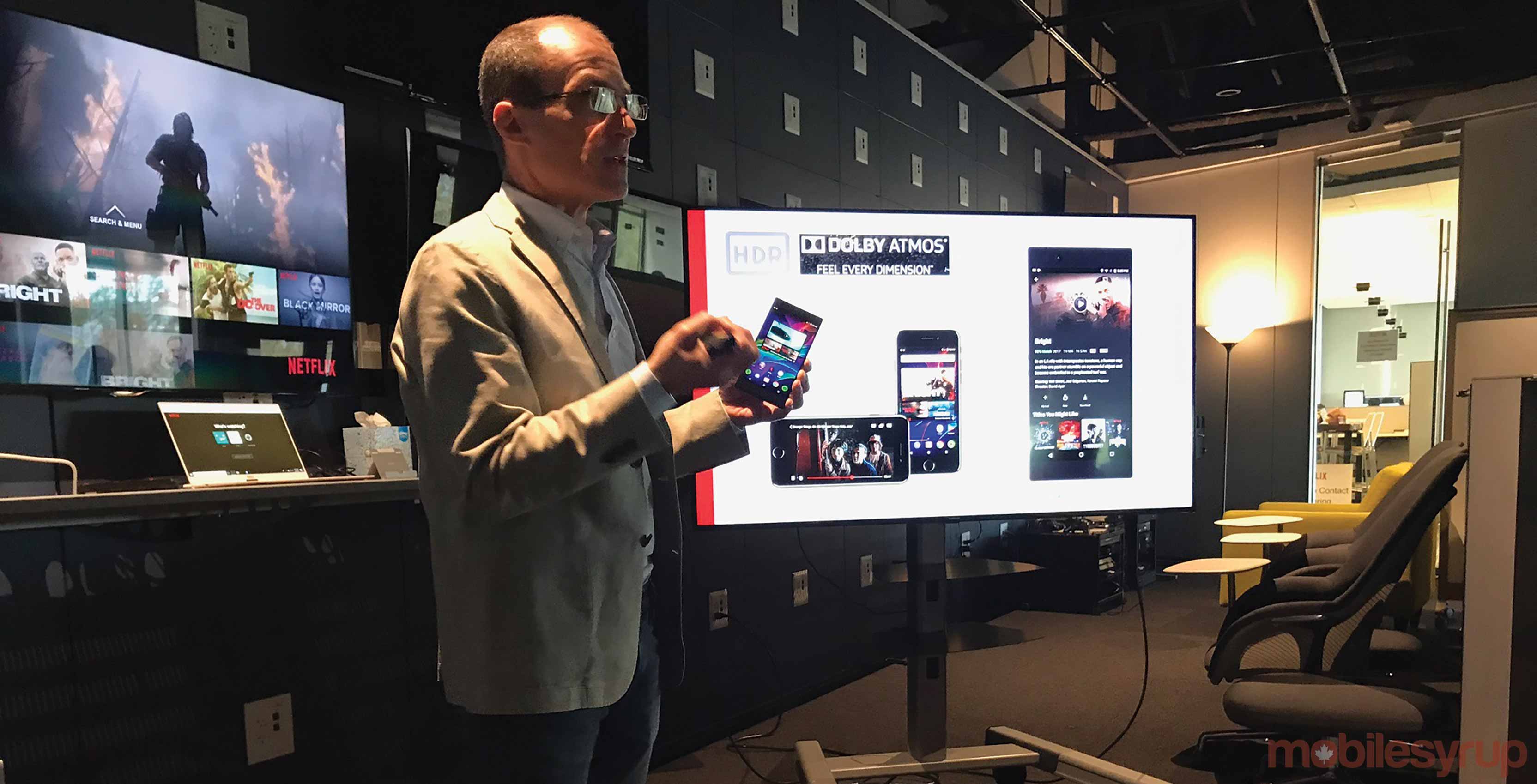 Netflix is available on at least 1,700 different models of devices throughout the world, according to the company.

To make that large number easier to manage, Netflix breaks down types of devices into three categories: ‘consumer experience’ products (TVs), ‘platforms’ (such as phones, tablets, or laptops) and ‘pay TV’ (set-top boxes like Apple TV or Netflix offered through service providers like Bell).

However, what people are actually doing on all of these devices is arguably more interesting. With that in mind, Netflix recently went over some global user statistics during a press event at its Los Gatos, California office.

During the session, Scott Mirer, Netflix’s vice president of device partner ecosystem, presented data on daily viewing habits around the world, including which types of devices users may be using during different times of the week, as well as what kind of content they might then be consuming. 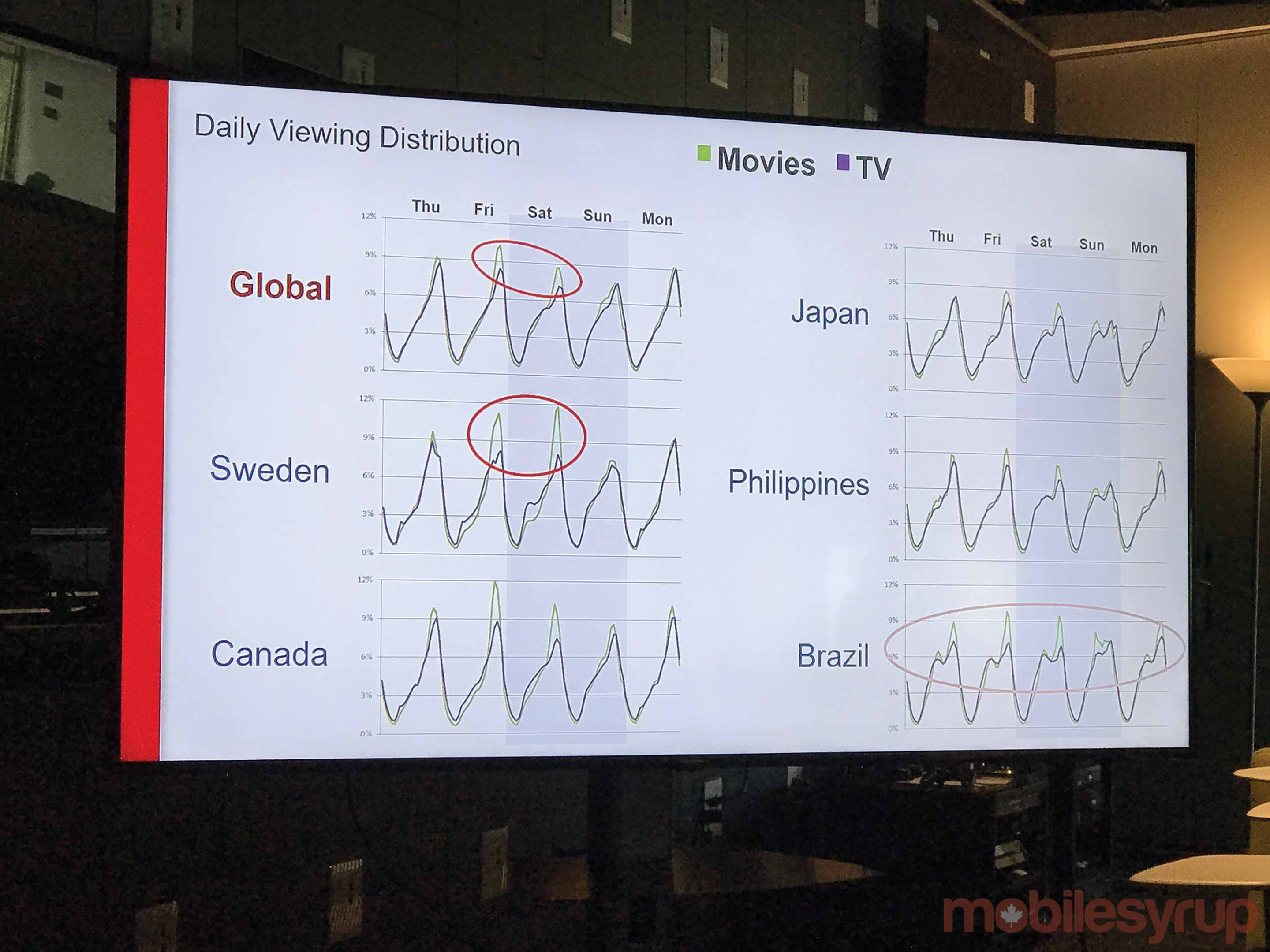 First, in terms of breaking down when users are watching content, Netflix says global movie and TV show viewing is on average at its highest on Fridays and Saturdays, particularly during the evening. Interestingly, though, Canada exceeds the average during these two days.

According to Netflix’s data, Canadians hit at least 12 percent viewership here on Fridays, compared to the global average of about 10 percent. While movie watching dropped slightly to 10 percent on Saturdays, this still placed between one and two percent higher than the global average.

Next, Mirer went over which type of device people use more at given points in a week, comparing figures for phone and smart TV use. Mirer noted that during peak weekly viewing time, which falls during Thursdays and Fridays, about seven to eight percent of global users are using a phone to watch content on Netflix. In comparison, about nine percent of Netflix users are streaming from a smart TV.

In Canada, where Netflix viewing is overall higher than the average, there’s a larger discrepancy by platform during these two days, with smart TV usage reaching between 10 and 11 percent.

Notably, out of the sample countries shown in Netflix’s charts — Sweden, Japan, Philippines and Brazil, Canada is the only country to exceed 10 percent. However, phone use is typically only around one percent higher during all days in Canada when compared to the global and country-specific averages.

Finally, Canadians also watch more kids and drama series on average during the week than global users do, particularly on Thursdays and Fridays. On Thursdays, about 11 percent of users are watching drama series, while 10 percent are engaging in kids shows, compared to about nine and eight percent globally in those respective categories. 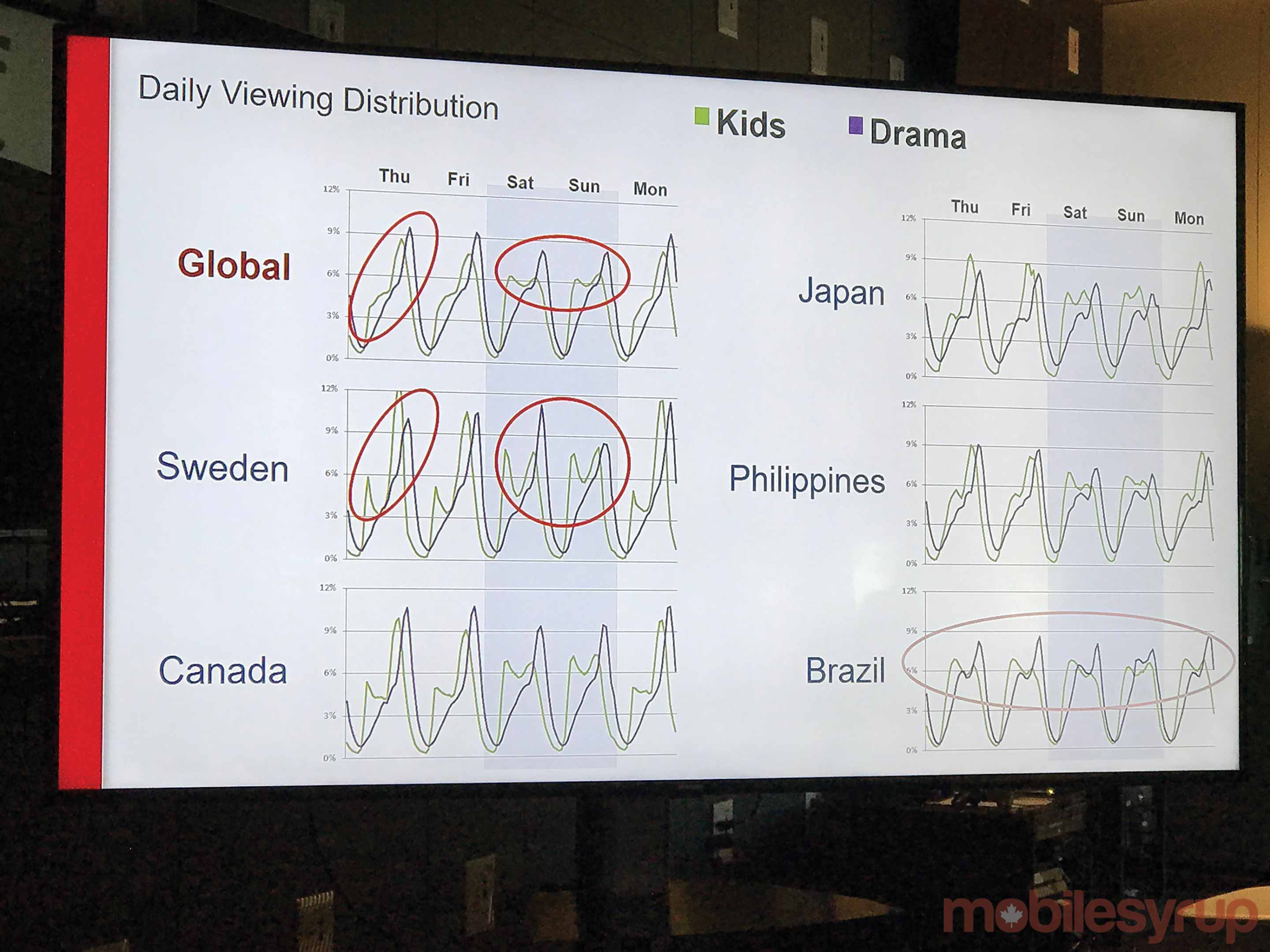 Interestingly, while drama series consumption remained the same on Friday, Canadians watched around one percent fewer kids shows on this day. Meanwhile, the global average for drama programs stayed at nine percent and children’s show viewership dropped to between seven and eight percent.

According to Mirer, this kind of data can be especially informative when Netflix plans future business initiatives.”When we try to launch new titles or merchandise, knowing ‘who’s in the room’ and what their expectations or behaviour patterns might be may help us personalize differently based on time of day,” said Mirer during a Q&A panel. While Mirer noted that this isn’t something Netflix is currently doing, it’s still a feature it can consider implementing in the future using this data.

“It also helps us understand when we see low viewing for, say, phones, compared to TV, it’s easy to say ‘oh, maybe phones aren’t as important,’ but then you look at the statistics and maybe they’re playing different roles in people’s lives,” Mirer added.

As an example, he mentioned how phone usage often increases in the evening, which he attributes to habits such as users winding down in bed while still on their mobile devices. “That gives renewed emphasis for the value of a phone or tablet, so even if viewing isn’t all that high, it can still play a key role. […] The data inspires us to renew our efforts on the mobile experience.”