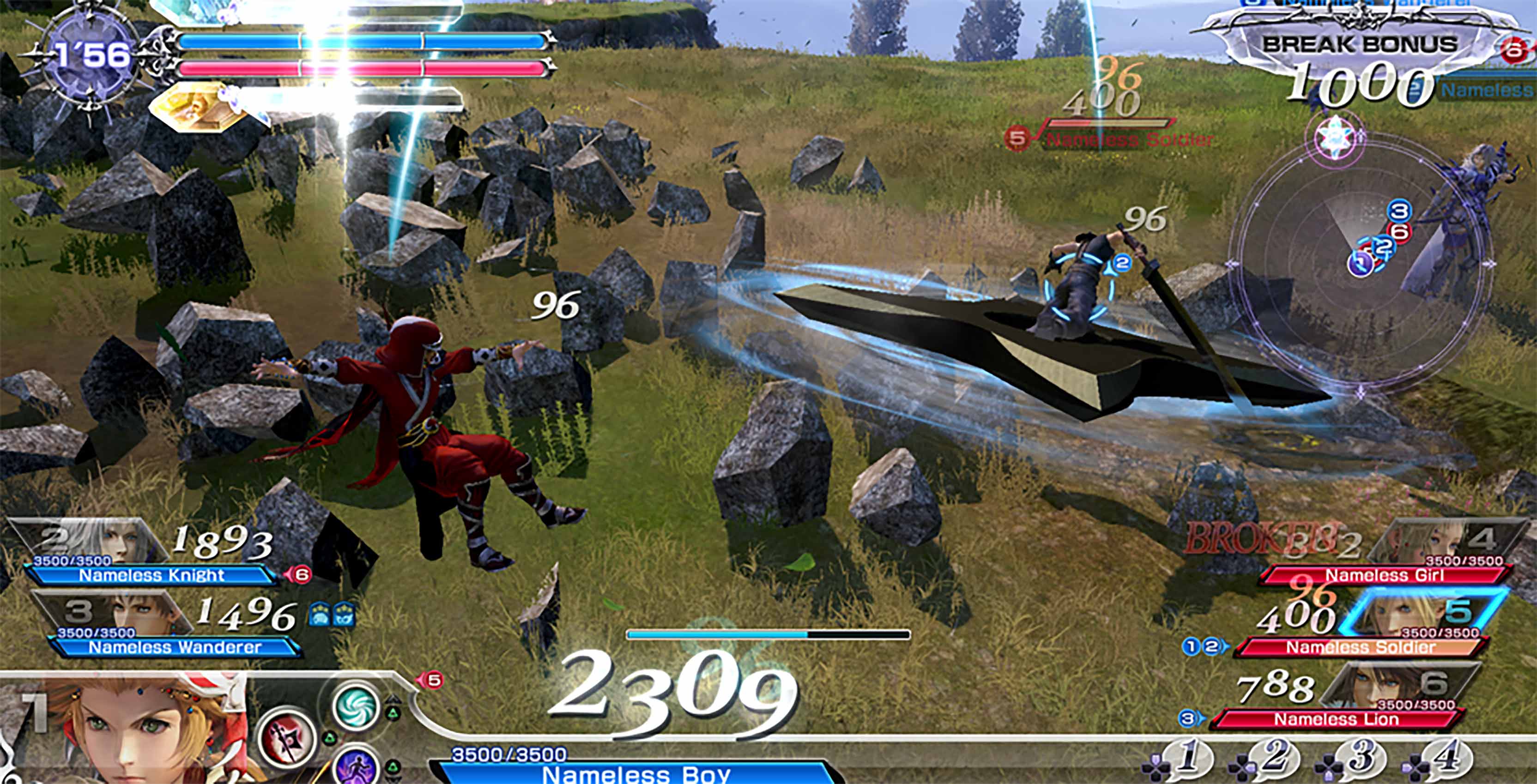 I recently had the chance to attend a Square-Enix preview event in Toronto, and based on what I’ve seen, there’s looking to be a lot of other great titles coming from the company to tide me over.

Best of all, the majority of these will be out in the coming months.

It’s been fascinating to see Square-Enix’s approach to mobile gaming evolve over the years. Back in August 2015, MobileSyrup senior editor Patrick O’Rourke wrote about how the Japanese gaming giant was successfully porting its classic games to mobile devices, such as Final Fantasy VII and Final Fantasy Tactics: The War of the Lions. This is on top of Square-Enix’s western publishing side, which is responsible for excellent mobile titles like Tomb Raider GO and Hitman GO.

Now, however, Square-Enix Japan has very much been about putting out original quality games for mobile platforms. As someone who mostly plays console games (and thus, traditionally only experiences Square-Enix games on those platforms), I was highly impressed with just how varied the company’s mobile offerings are.

At the event, there was a wide assortment of playable titles, both of the already available and yet-to-be-released variety. The sprite-based Final Fantasy: Brave Exvius, 3D action Mobius Final Fantasy and Disney-Final Fantasy action crossover Kingdom Hearts Union X [Cross] were all present and just as fun as ever.

However, the star of the mobile show definitely was the newest addition to the company’s mobile roster is Final Fantasy XV: Pocket Edition, a remake of sorts of the November 2016 PS4 and Xbox One game. Pocket Edition is a ten episode series that recreates the story, characters and gameplay scenarios of the original game, only through a chibi art style that’s optimized for mobile.

Having beaten Final Fantasy XV, I was really surprised at how well Square-Enix has been able to replicate that massive base experience on smaller devices. Holding the screen will carry out basic sword attacks, with a double swipe enabling protagonist Noctis to warp in any direction. The RPG levelling elements, chocobo-riding, food cooking, voice acting and Yoko Shimomura’s stellar score are also all carried over from consoles.

The first episode of Final Fantasy: Pocket Edition will be available for free, with the remaining episodes offered at an additional charge. All episodes will launch together this fall, although Square-Enix has not confirmed a specific release date or pricing details.

The core Final Fantasy XV experience is one of open-world, third-person action gameplay — something the longrunning series isn’t exactly known for. However, Square-Enix thankfully also has a number of older, more traditional JRPG experiences for the admittedly curmudgeonly hardcore fans such as myself.

The first console game I tried out was Secret of Mana. It was quite the pleasant surprise in August when Square-Enix confirmed that a 3D remake of the original 1993 SNES Secret of Mana was in the works for PS4 and PS Vita. The game features complete 3D character models, an updated score and full voice acting.

The third-person action combat also makes its return. There were some noticeable delays between when I’d attack and the enemies would actually take damage, but otherwise battles were entertaining, even early in the game. I imagine it will get even better once party members join your team and you learn more abilities. Secret of Mana releases February 15th, 2018.

As for new games, I also played about 20 minutes of Lost Sphear, Tokyo RPG Factory’s second JRPG coming off of last year’s very good I Am Setsuna. As the studio’s name might suggest, Square-Enix founded the team to create traditional-style JRPGs, something old-school fans such as myself certainly appreciate.

Like Setsuna, Lost Sphear features multi-character parties and Active Time Battle turn-based combat, harkening back to older Final Fantasy games and Chrono Trigger. Meanwhile, the pretty art style and a young man, who suffered a phenomenon that he had never seen, faces an ominous power that threatens the fabric of reality.

Lost Sphear launches on Nintendo Switch and PS4 on January 23, 2018.

This is to say nothing of the bizarrely-named but surprisingly great Project Octopath Traveller, a 16-bit loving throwback to the older Final Fantasy-style JRPGs. The Nintendo Switch exclusive game was not at the preview event, although a playable demo is currently available for download on the eShop.

The fight is on (again)

Square-Enix also has the crossover fighting game Dissidia Final Fantasy NT in lieu of a traditional single-player Final Fantasy RPG experience. NT is follow-up to the 2009 and 2011 Dissidia PSP games and a port of the arcade game that originally released in Japan in November 2015.

In NT, you’ll be able to choose from dozens of popular characters from the Final Fantasy series, including Cecil (FFIV), Kefka (FFVI), Cloud Strife (FFVII) and Lightning (FFXIII).

NT also introduces some great newcomers, such as Ramza from the seminal Final Fantasy Tactics and Noctis from Final Fantasy XV. This time around, development duties are handled by Team Ninja, the makers of Ninja Gaiden and Dead or Alive.

I’ve always loved the Dissidia series for its accessibility; like Super Smash Bros., it’s a crossover brawler that isn’t about stringing together complex combos, but rather about timing and understanding movesets. Knowing the range and power of each attack and when to block, dodge and parry accordingly is crucial.

This time around, fights are in 3v3 format, which makes combat delightfully chaotic in a Smash Bros.-esque way. It’s essential to survey the large arenas (based on classic Final Fantasy locations such as the original game’s Cornelia and VII‘s Midgar) for incoming opponents, as well allies who may be getting ambushed and need a helping hand.

Of the titles I saw, Dissidia is easily my most anticipated.

Square-Enix is also making its first foray into VR with Final Fantasy XV: Monster of the Deep, based on the 2016 game’s hit fishing mini-game. You play as an unnamed fifth member of Noctis’ group and are taught the basics of fishing from the boisterous Prompto.

Using either PlayStation Move or DualShock 4 controllers, you’ll use a sonar to locate fish in the water. For my demo, I used the PS Move Controllers, which allowed for fairly precise throwing of the fishing lines. Once you’ve snagged a fish, it becomes a somewhat tense game of reeling in your prey while shifting directions with the controller to prevent it from escaping.

I later encountered the titular monstrous fish, which I needed to weaken first using a crossbow before throwing my hook at it. Aiming in first-person feels good, particularly because the PS Move controllers work rather well. I didn’t get a chance to use the DualShock 4, so I’m not sure how that may differ, but my experience with the Move Controllers was quite intuitive. My demo ended with Noctis and his friends eating our prize around a campfire.

Interestingly, this is a radical departure from the Final Fantasy XV VR experience that was originally revealed at E3 2016, which instead featured first-person shooting elements. Some may be disappointed with this change, but shifting to a relatively calmer and more relaxing experience based on a popular mini-game nonetheless works well in virtual reality.

As with many VR games, it’s unclear just how much content Monster of the Deep will contain, but based on my hands-on impressions, what’s there makes for a fun diversion with some solid fan service for those who have played FFXV.

Square-Enix was smart to diversify its upcoming games lineup, which does well in representing fighting games, mobile titles, traditional JRPGs and even virtual reality. I also haven’t even touched on the games the company’s western division publishes, like Tomb Raider or Life is Strange.

Again, this also all helps serve to make the wait easier for what are arguably their two biggest upcoming titles: Kingdom Hearts III (which Square-Enix says is coming out in 2018) and Final Fantasy VII: Remake, which currently does not have a release window. Regardless of what kind of games you like, Square-Enix has done a really good job of covering you here.