Apple announces iPhone 7 and iPhone 7 Plus, coming to Canada on September 16

After countless leaks and a couple of preshow hiccups, Apple revealed the newest additions to its long-running series of smartphones, the iPhone 7 and iPhone 7 Plus, today.

Starting with the larger of the two smartphones, the iPhone 7 Plus features a 5.5-inch display, the same size display as found on the iPhone 6 Plus and 6S Plus. 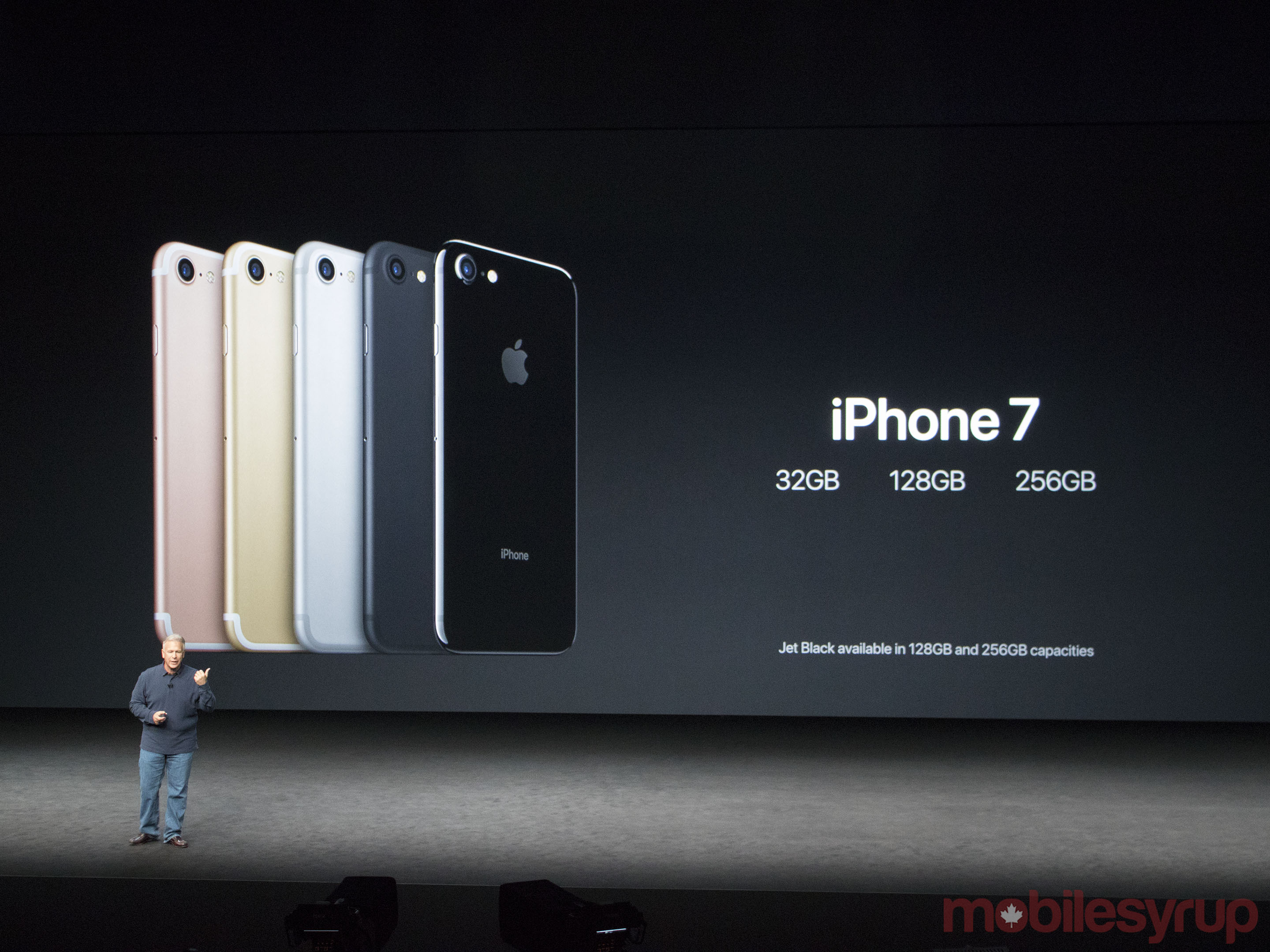 Like the G5 and just announced V20, the iPhone 7 Plus features a dual lens back-facing camera. The new 12-megapixel sensor captures 50 percent more light, according to Apple, and includes a faster f/1.8 aperture lens, as well as LED true tone flash module. The first lens is a 28mm equivalent found in the standard iPhone, while the other is a 56mm telephoto lens that’s better at capturing far away subjects. Essentially, this second lens gives users access to a camera with 2x optical zoom. The company’s new camera software allows the iPhone 7 Plus to go all the way to 10x zoom.

Moreover, the two lenses can work together to create advanced depth of field effects.

In his usual breathless style, Apple design chief Jony Ive described the new manufacturing process Apple designed to build the new iPhone. Essentially, the result is a new high gloss finish called jet-black that makes the iPhone look a lot like Samsung’s most recent smartphones. However, for those who don’t like glossy devices, there’s a matte black finish, simply called black. The company’s popular gold and rose gold finishes are set to make a return as well. The new enclosure is also water and dust-resistant — IP67 certified, to be exact. 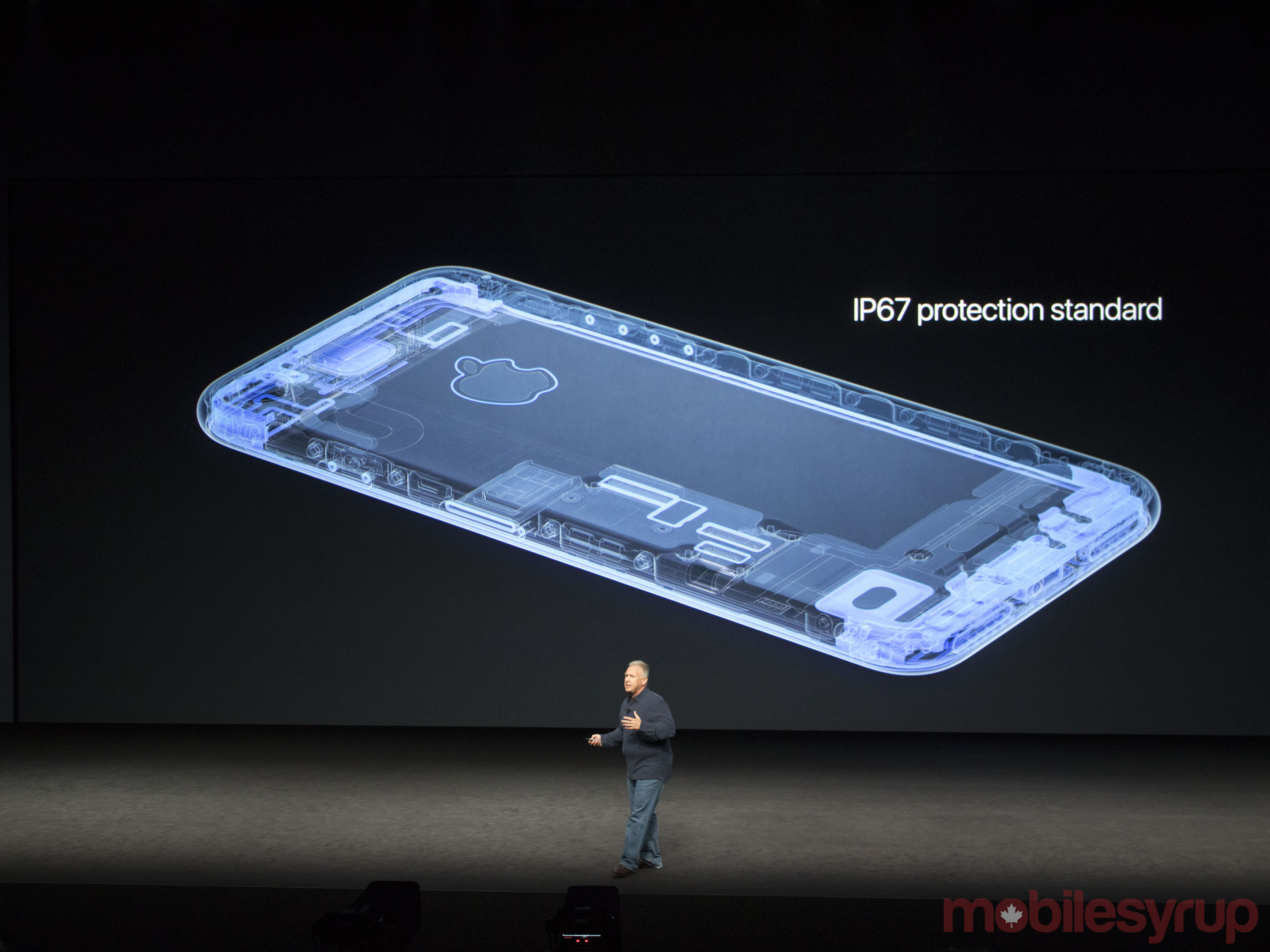 The home button has been also redesigned to make use of the company’s Force Touch technology. Like the Apple Watch, Apple has integrated its signature Taptic Engine into the device, allowing the iPhone to generate better tactile feedback in general use.

The smaller, and more affordable of the two models, the iPhone 7, does not feature a dual lens camera. That said, the smaller iPhone finally features optical image stabilization. 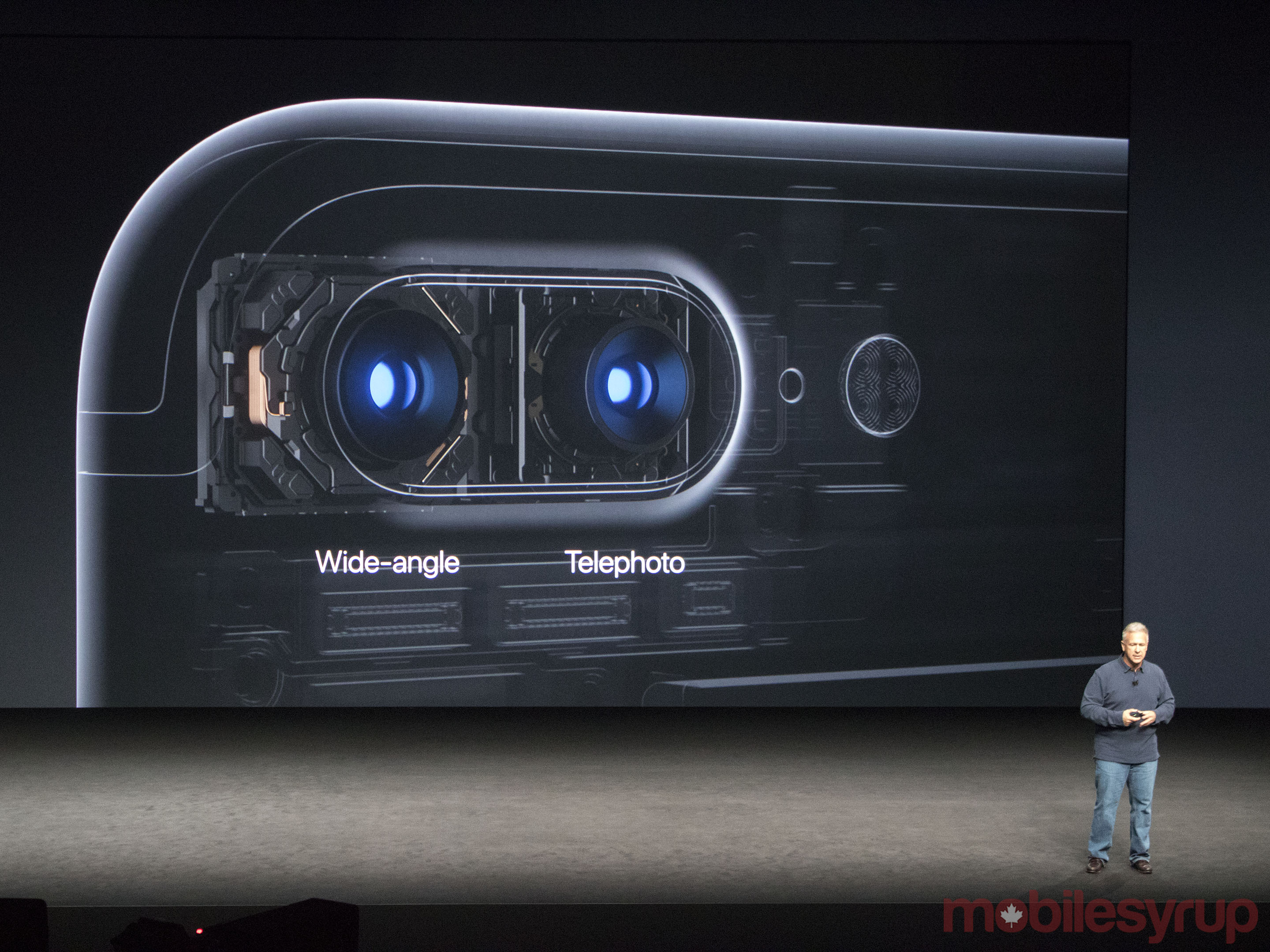 Both phones feature the company’s new retina display. The company did not state the resolution of said display, but did mention that it features a wider colour gamut and is 25 percent brighter than the screen found on the previous iPhone.

The iPhone 7 also features stereo speakers. Yes, the 3.5mm headphone jack is gone (most of the audience was tentative with its applause when Phil Schiller announced this fact). Thankfully, Lightning-enabled EarPods will be included in the box. Moreover,  the company plans to include an adapter that will allow consumers to continue using their existing analog headphones with the new iPhone 7. The company also used this opportunity to announce a pair of wireless headphones. Dubbed AirPods, the headphones are rated to last five hours on a single charge. They come in a charging case that provides up to 24 hours of additional battery life. They can pair with any existing Apple product without a complicated pairing process. 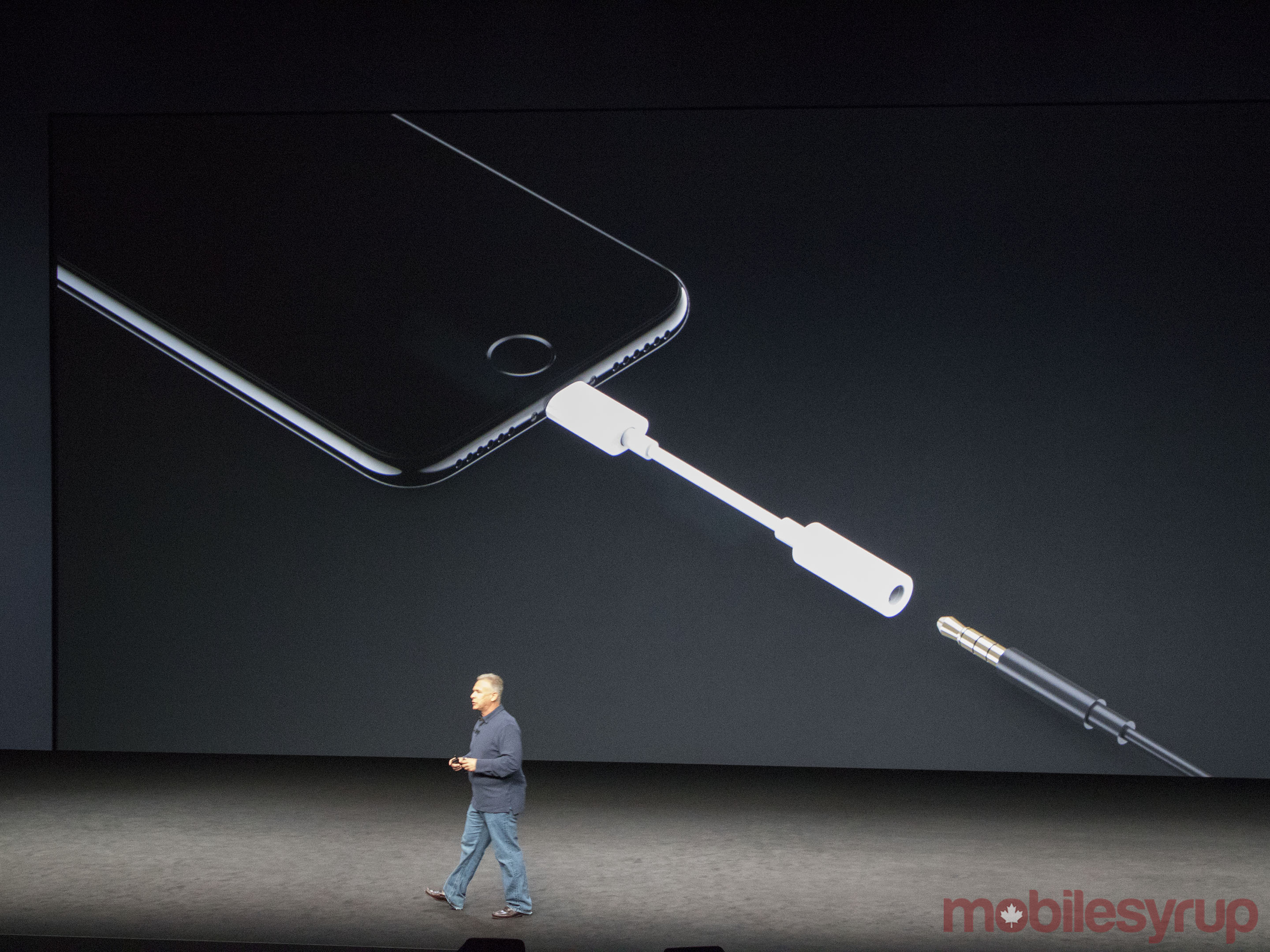 Last but not least, the two phones come with the company’s new A10 Fusion chip. It’s a 4 core processor that’s 120 times faster than the processor found in the original iPhone.

The new built-in GPU is 50 percent faster than the A9 and three times faster than A8. The more power efficient processor should lead to, on average, two hours of additional battery uptime. 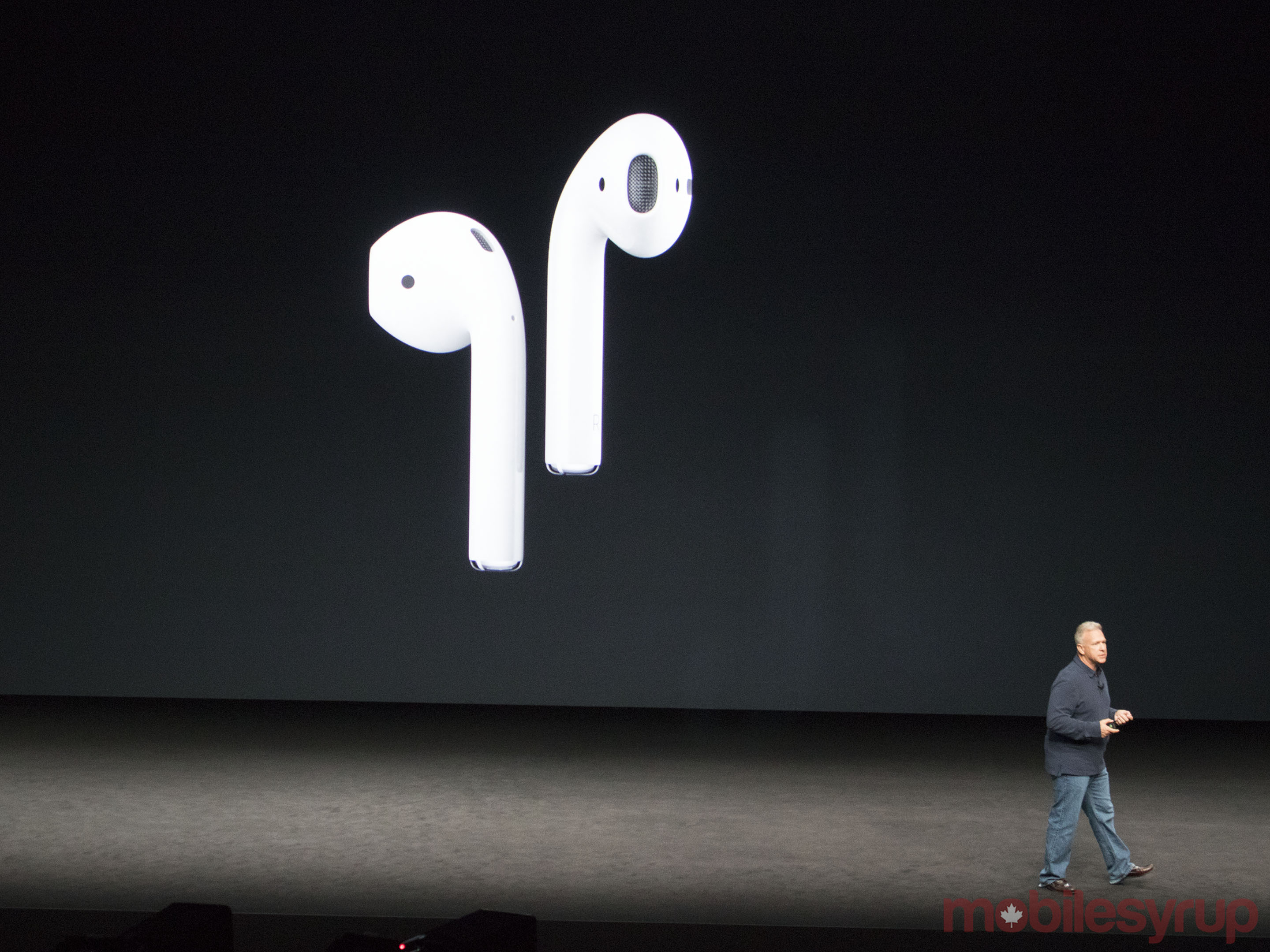 The two phones are available to pre-order on September 9. They’ll both be officially available on September 16. The 32GB iPhone 7 starts at $899 CAD, while the iPhone 7 Plus will start at $1049 CAD. The AirPods, priced at $159 USD, will start shipping in October.