Acer unveiled a slew of new products today at its annual “Next at Acer” even at 4 World Trade Center in New York City. Underscoring the new devices is a commitment by the company to delve further into mobile and VR.

Like other PC manufacturers, Acer has been forced to reorient and redefine its place in the market. With Intel’s recent announcement that it was slashing its workforce in the face of slowing PC sales, it’s unsurprising the companies using its chipsets are looking to do things a little differently.

The pivot isn’t full-fledged, however, as a majority of the new rollout remains in the PC space, but Acer CEO Jason Chen made it clear the company was going to begin changing tack. 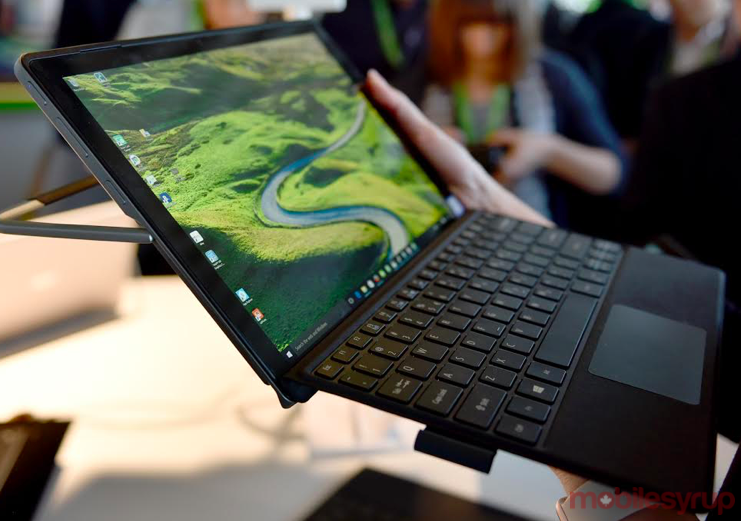 Chen unveiled a new 2-in-1 notebook called the Switch Alpha 12, proclaiming it the first fanless 2-in-1 to use a 6th-gen Skylake Intel Core i7, i5 and i3 processor. Acer calls this LiquidLoop, a liquid cooling system that transfers heat from the CPU to a heat pipe via the thermal conducter. The pipe then generates the liquid in one direction to dissipate through a continual process of condensation and evaporation. 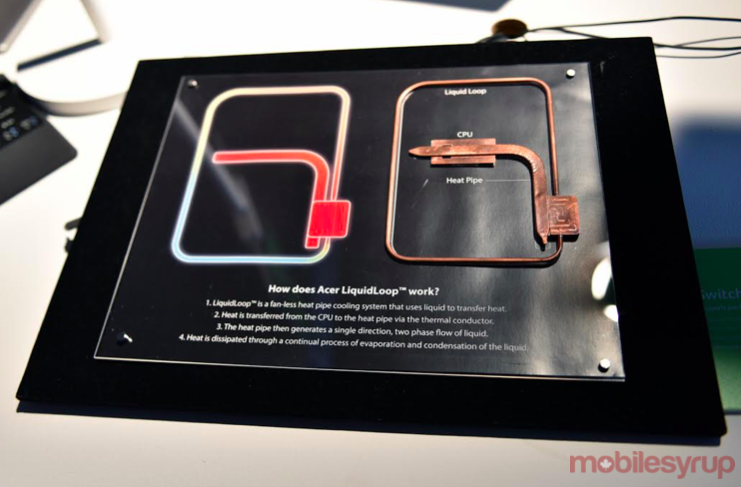 The lack of venting does make the Switch Alpha 12 look and feel a little sleeker, though consumers are more likely to appreciate the 165-degree tilting range on the back kickstand and the fact the keyboard comes included with the unit instead of being sold separately as an accessory.

The 12-inch IPS display has a resolution of 2160 x 1440, which does look nice up close with excellent viewing angles. It runs on Windows 10, and will get the upcoming Anniversary Update release coming later this year. 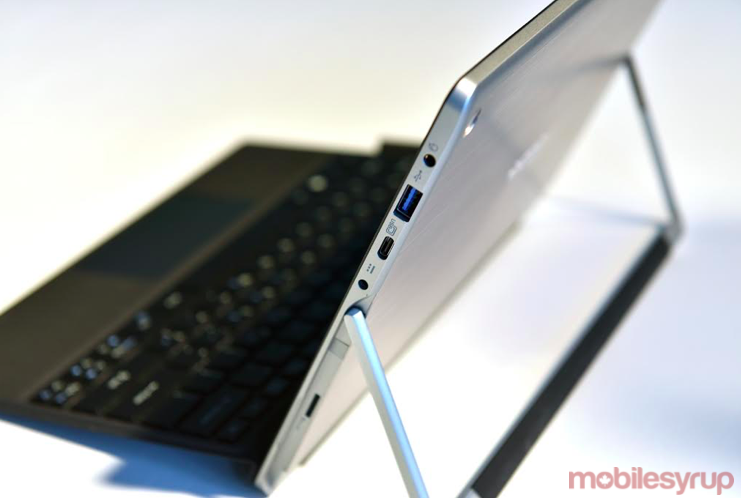 Ports include two USB 3.1 Type-C, three regular USB, one DisplayPort, one HDMI, and 3.5mm jacks for microphone input for and speaker audio output. A microSD slot can expand the internal storage further. Specs will apparently be configurable, though it’s not yet clear how that will pertain to Canada. Storage options are reportedly going to range between 128GB, 256GB and 512GB, with 4GB or 8GB of RAM. Battery life is rated at eight hours, but you can bet that will be lower depending on usage.

Canadian pricing for the unit has yet to be revealed, but it is confirmed to hit retail in June starting at $599 U.S. 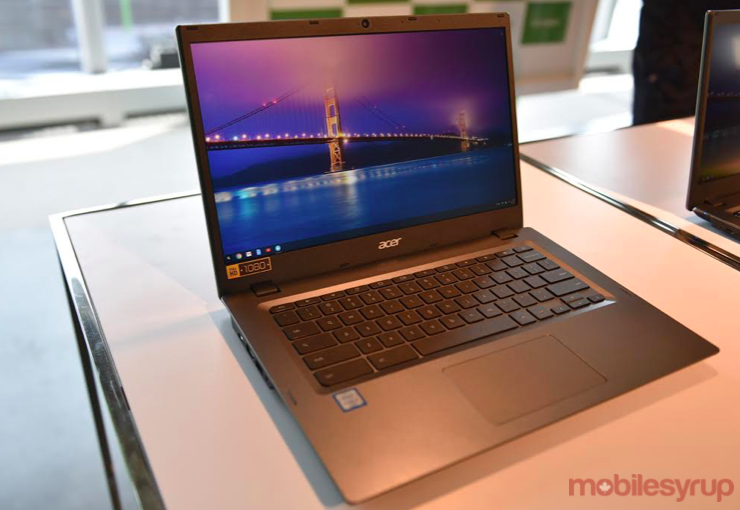 While currently second-place in 2-in-1s worldwide, Acer ranks first in Chromebooks, particularly by volume. Enter the Chromebook 14 for Work, a 14-inch device that ramps up the specs considerably from the 14-inch consumer model the company launched last year.

It’s the first Chromebook running on the 6th-gen Skylake Intel Core processor and also the first to offer Gorilla Glass — both on the display and the top panel behind it. The idea in doing this is partly aesthetic, allowing customers to personalize the panel with an image nestled within the glass. For the moment, Acer is looking to provide images consumers can choose from, and it appears regional considerations will be part of the rollout. For example, a Hello Kitty image is being marketed in Taiwan.

While unconfirmed, the plan may be to allow consumers to upload their own images or collages to truly personalize the device. What extra cost that might incur is unknown at this time. 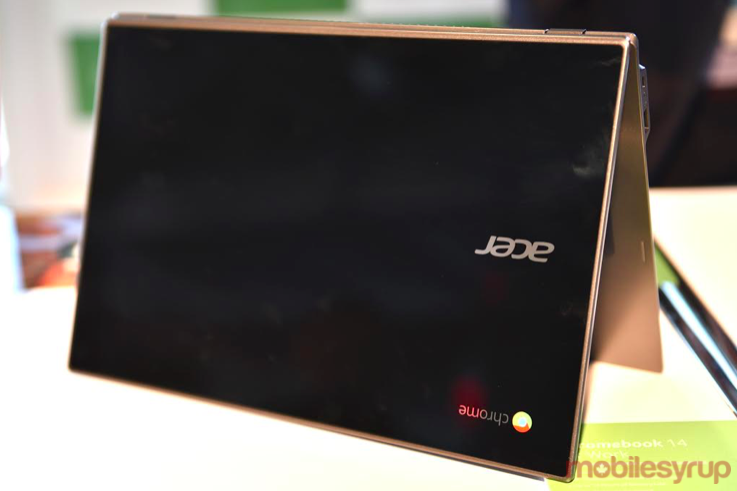 Robust and built to the rigourous standards of the U.S. military, this is a Chromebook that can apparently take a beating. The configuration options are numerous, and it’s not evident what will or won’t be made available when the device launches in Canada. Backlit keyboard or standard. A 720p or 1080p display. Either 2GB, 4GB or 8GB of RAM. An Intel Core i3 or i5 or a lower-powered Celeron processor. 32GB or 64GB internal storage. You get the idea.

One constant is the USB Type-C port, indicating that Acer is embracing the burgeoning industry standard, as many other companies are expected to do this year.

Pricing for Canada hasn’t been released, but the Chromebook 14 for Work will start at $349 U.S. when it launches in May.

By “mid-tier,” Chen meant mid-range, but semantics aside, Acer is wisely staying away from the flagship category and looking to compete in a race to zero. The company has never had carrier support in Canada, so has sought retail partners instead. Most recently, that was Costco selling the Liquid Jade Z, a mid-ranger that sold for $250.

The Liquid Zest Plus is a more interesting handset, particularly for the monstrous 5,000mAh battery inside and the lofty claims about the camera. Chen hailed it as “the best camera in its price range” of under $250 U.S. We’d have to judge that after getting our hands on a review unit, whenever the phone crosses north of the border. 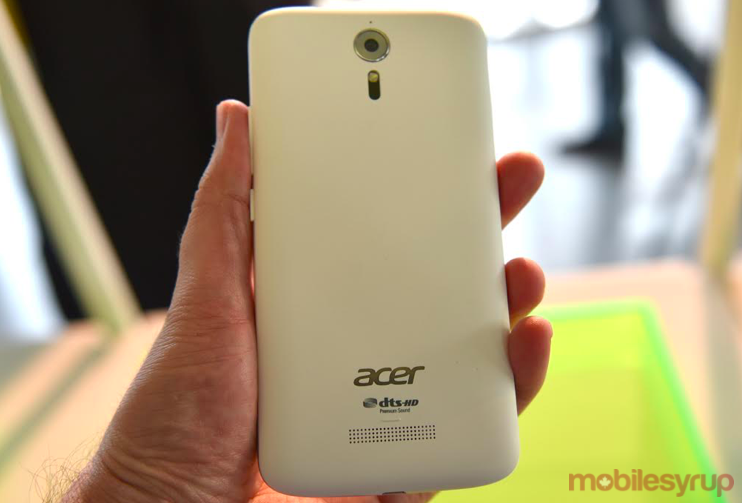 With a plastic body and restrained form factor, the Liquid Zest Plus isn’t especially pretty. The specs are also decidedly unspectacular. It has a 5.5-inch 1080p LCD display, runs on Android 6.0 Marshmallow, driven by a MediaTek MT6735 chipset and 2GB of RAM. There’s 16GB of internal storage and, to make room for the battery, it looks like expandable memory via a microSD card has been sacrificed.

The 13MP rear camera sports what Acer calls a “tri-focus” system that combines laser, phase detection and contrast detection autofocusing together to produce better images. Little was said about the image sensor, lens or aperture, so it’s not immediately clear what this tri-focus system is up against.

Still, with a battery that big, and specs that underpowered, Acer’s claim of two days of battery life may actually be a conservative estimate.

No launch date was announced, though it probably won’t be long. 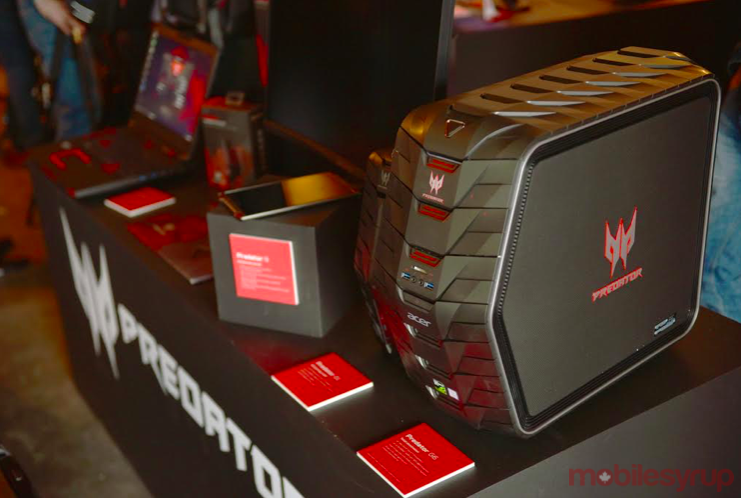 Acer’s Predator line of gaming PCs is only a year old, but Canada is among the 13 markets it outperformed competitors in. The new Predator G1 gaming desktop, which is a beast of a machine, will definitely be coming to the Great White North. A limited time promotion will also include the country — the first 1,000 customers who pre-order the device will get the special Predator G1 suitcase for free. Both look great, and it’s easy to see how any gamer who needs to be mobile with his or her gear may be interested. 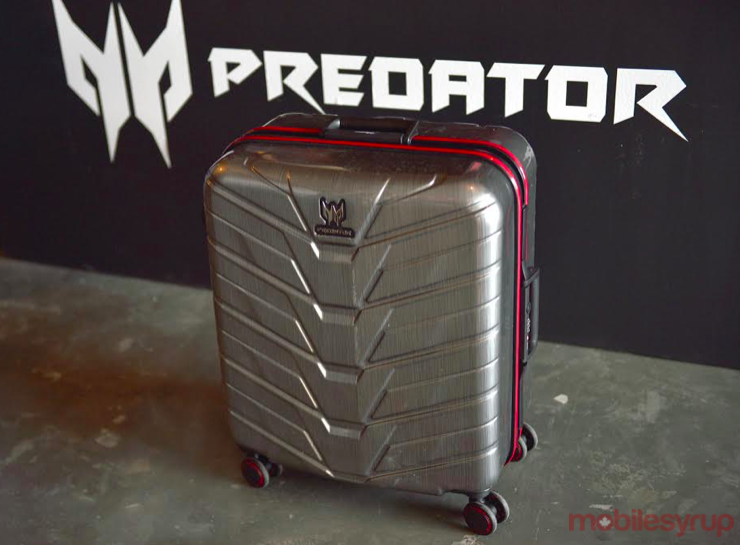 The G1, along with the Predator 17 X gaming laptop, have been declared “VR ready” and hands-on demos showed that. Gaming PCs figure to play a big role in VR’s viability in the near-term because they have the hardware chops to handle the content.

The G1 desktop will be available in Canada in July, except Canadian pricing isn’t confirmed yet. It will start at $2,299 U.S. and go up from there, depending on configuration.

The Predator 17 X will be available in June, again without confirmed Canadian pricing. It will start at $2,799 U.S. and go up based on configuration.