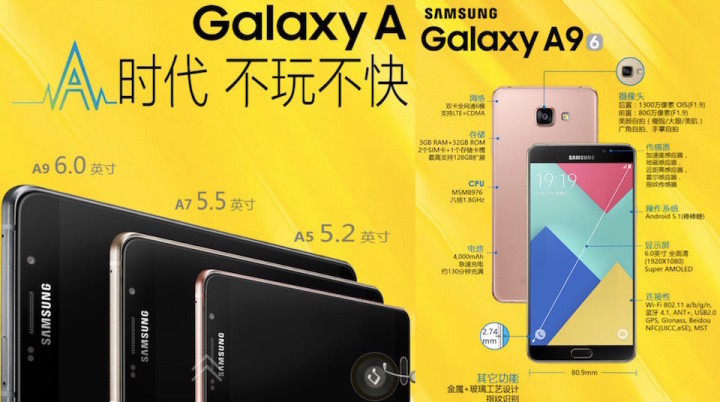 After leaking numerous times over the last few weeks, Samsung’s upcoming Galaxy A9 smartphone has finally been officially announced by the South Korean company.

The Galaxy A9 shares many of the same features as Samsung’s other A-series smartphones, which includes the A3, A5 and A7. The phone features sculpted metal edges, a glass front panel, and a case that measures in at 7.3mm (o.1mm thicker than other A-series devices).

The smartphone comes equipped with a 6-inch 1080p Super AMOLED display with 367ppi pixel density. When comparing the A9’s form factor to that of the iPhone 6s Plus, Samsung’s latest smartphone is reportedly just 2mm wider than Apple’s phablet flagship smartphone.

In terms of processor, the A9 utilizes the rebranded 64-bit octa-core Snapdragon 652 (previously called the Snapdragon 620), 3GB of RAM and 32GB of storage (that’s expandable to 128GB with a microSD card). The A9 also includes a 13 megapixel back camera and an 8 megapixel front camera, built-in fingerprint sensor and Android 5.1.1. The smartphone’s battery measures in at a massive 4,000mAh.

Pricing still hasn’t been confirmed but the phone is set to go on sale in China later this month. It’s unclear if the Samsung Galaxy A9 will make its way to Canada.