Twitter today announced its Q1 2015 earnings, and while the company was able show a growth in its monthly subscribers, the earning results leaked ahead of schedule, sending its stock sinking by 20 per cent.

The social media company now has 302 million average monthly active users (MAUs), which is an 18 per cent increase compared to the 288 million subscribers it had in Q4 2014. Mobile users now account for a staggering 80 per cent of the company’s total MAUs. 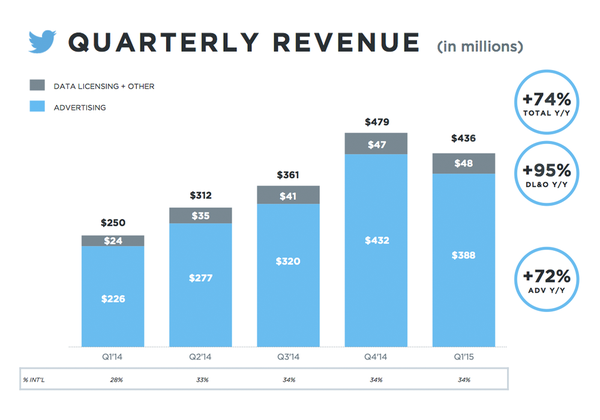 Twitter’s Q1 revenue came in at $436 million, a 74 per cent increase year-over-year. That said, Wall Street wasn’t happy with the results; the investment community had predicted that the company’s revenue would hit between $440 million and $450 million. Almost all of Twitter’s advertising revenue came from mobile ads, with only 11 per cent of its ads revenue coming from desktop users. Twitter lost $162 million for the quarter, compared to $65 million during the same period last year.

With approximately $3.6 billion of cash and cash equivalents on hand, Twitter was busy buying assets this quarter. Its most notable acquisitions were Periscope and ZipDial.

Dick Costolo, CEO of Twitter, said, “While we exceeded our EBITDA target for the first quarter, revenue growth fell slightly short of our expectations due to lower-than-expected contribution from some of our newer direct response products. It is still early days for these products, and we have a strong pipeline that we believe will drive increased value for direct response advertisers in the future.”