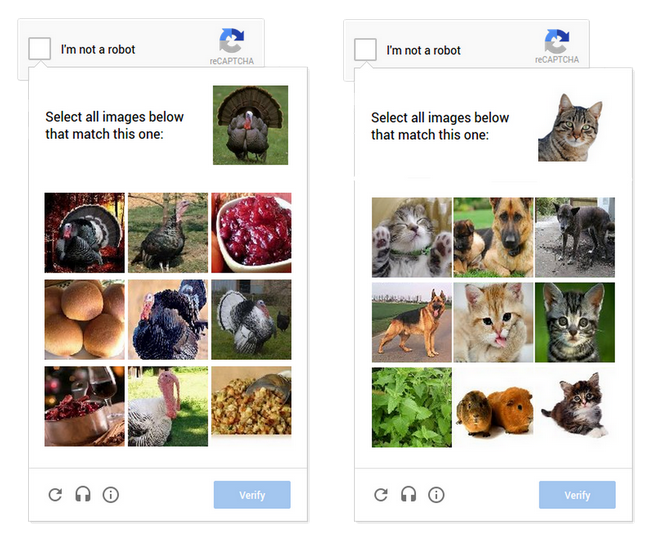 ReCAPTCHAs are something of a necessary evil. They filter out bots, sure, but they can also be really annoying, especially if the words are particularly unclear or hard to decipher. Google is hoping to remove the need for CAPTCHAs by using artificial intelligence to analyze users’ behaviour.

About two years ago, Google started using ReCAPTCHA to help decode building numbers in Google Street View. The benefit was two-fold; users didn’t have to squint at wobbly black letters and Google was able to crowdsource efforts to improve the accuracy of its own product. Now it’s changing things up again with a new system that automatically sorts robots from humans.

As bots become more adept at reading the distorted text we’ve come to know and hate, Google is looking to artificial intelligence to solve the problem of CAPTCHAs. The company’s Advanced Risk Analysis considers the user’s entire engagement with the CAPTCHA before, during and after (this includes the movement of your mouse, your IP address, etc) to determine if they are a regular user.

The end result is that Google will now straight up ask if you’re a robot, and when you check the box that says ‘no,’ the company’s system runs analysis to make sure you’re telling the truth. If it all checks out, then you’re good to go. No more interaction required. When the system isn’t sure is when things get interesting.

If Google thinks you might be a robot, it’ll ask you to decipher an image (like the aforementioned street signs). Simple. For mobile users, things are even easier, because the API Google is rolling out today includes the flexibility to experiment with fun puzzles.

One example offered by Google is a picture-matching puzzle that asks the user to match related pictures of cats. Google presents the user with one primary image and a pool of nine secondary images. The user is asked to select all images in the pool that match the primary image. Presumably this method also helps Google’s computers to better process images for situations like visual search. Everybody wins.