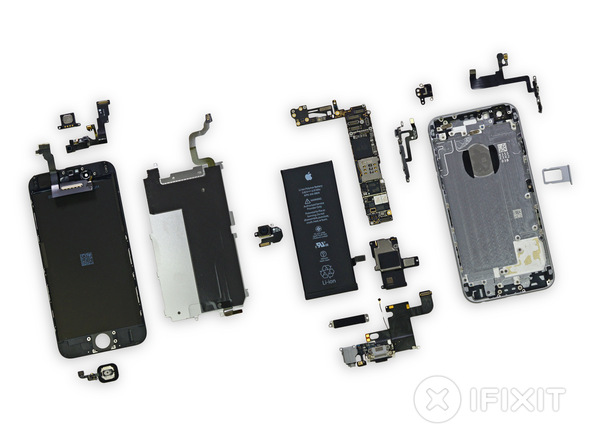 The iPhone is typically very difficult to repair at home. Without the proper tools, it’s pretty much impossible. However, if you do decide to go down that road, you’ll probably be pretty happy to hear that this year’s iPhone 6 and iPhone 6 Plus have both received higher repairability scores from than the iPhone 5s.

iFixit’s annual teardown has also given us some key information about the hardware powering the devices. Apple promised vastly improved battery life with both the iPhone 6 and iPhone 6 Plus, but the company didn’t specify the size of the battery during the unveiling earlier this month.

Thanks to this morning’s autopsy (performed on phones obtained in Australia last night), we know that both models have 1GB of RAM, and the battery size for the iPhone 6 is 1810mAh. The larger iPhone 6 Plus boasts a 2915mAh battery. Both are considerably bigger than the iPhone 5s’s 1500mAh battery but still don’t quite match Android devices of similar size. The 4.7-inch Nexus 4, for example, had a 2100mAh battery, while the 4.5-inch Galaxy S5 Mini has a 2100mAh battery. The 5.5-inch LG G3 and the OnePlus One have 3000mAh and 3100mAh cells respectively. Hopefully Apple’s battery optimization will make up the difference.

We also get our first look at the A8 with M8 motion coprocessor as well as the iPhone’s NFC chip, which Apple has deemed will only be used for its own Apple Pay system. The vibrator mechanism has also moved to the right of the battery and Apple has gone with a linear oscillating design, just like in the 4s (the iPhone 5 and the iPhone 5s used a counterweight design). There’s also a newly designed speaker assembly, though it’s not clear if anything other than the design of the component has changed. The Lightning connector and headphone jack are now joined and share a cable, so both need to be replaced if either fails.

Overall, the iPhone 6 and iPhone 6 Plus are the some of the most repairable iPhones yet, scoring a respectable 7/10, despite the usual proprietary pentalobe screws used by Apple. This is thanks to easier access to the battery, a display that can be removed without having to mess with anything else, and rerouting of the Touch ID sensor cable, which was easily torn during iPhone 5s repair.

Apple sets up iSight camera replacement program for iPhone 6 Plus