When Satya Nadella took control of Microsoft earlier this year, he let the world know that Microsoft would be focusing on mobile on cloud. This, he felt, was what Microsoft needed to do in order to thrive. Now, Microsoft is echoing that sentiment as it announces a major overhaul to its MSN media portal.

Once a corner stone of the casual browser’s internet experience, sites like MSN and Yahoo have fallen out of fashion over the decade. Microsoft is hoping to turn things around with a new, customizable version of MSN that is optimized for mobile. 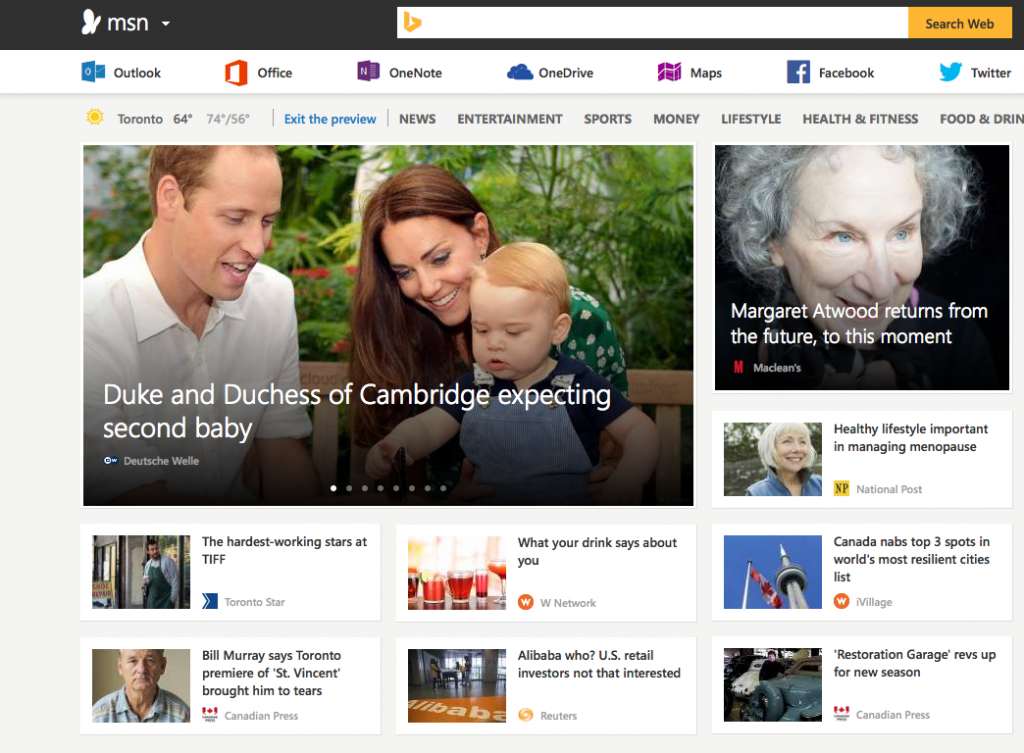 Web users will see a new Services Stripe along the top of their screen. This new navigational bar includes links to Outlook mail, Facebook, OneDrive, Office 365, and more. Underneath, there’s a second nav bar that divides content up by genre (sports, entertainment, and health and fitness, among others). Clicking these sub headers influences what content you see on the page below. Categories can be added, reordered, or removed based on your interests and preferences.

This customized content will come from key content providers depending on your region. In the US, Microsoft is partnering with the likes of the New York Times, and the Wall Street Journal as well as CNN, AOL and its properties, and Conde Nast. Globally, partnerships include Sky News, the Guardian, NDTV, Le Monde, and more. Users can also search for recipes, follow certain topics or stories, and create watch lists for their favourite stocks. A quick glance at the new version of MSN from a Canadian IP address reveals content from the Toronto Star, Canadian press, National Post, Metro News, and the Huffington Post.

Mobile is where the new MSN will really shine, though. Microsoft plans to release a full suite of MSN apps for iOS and Android in the coming months. Once you set your preferences on one platform, that information will be synched across all of your devices. Microsoft didn’t go into much detail on its app plans, but the company did state “your preferences will be connected across MSN, Cortana, Bing and other Microsoft experiences,” so it looks like Bing is finally making the jump from Windows Phone only to cross platform compatibility.

Microsoft didn’t give an official release date for its iOS and Android apps, but the new version of MSN is available at preview.msn.com for those that want to take a peek.