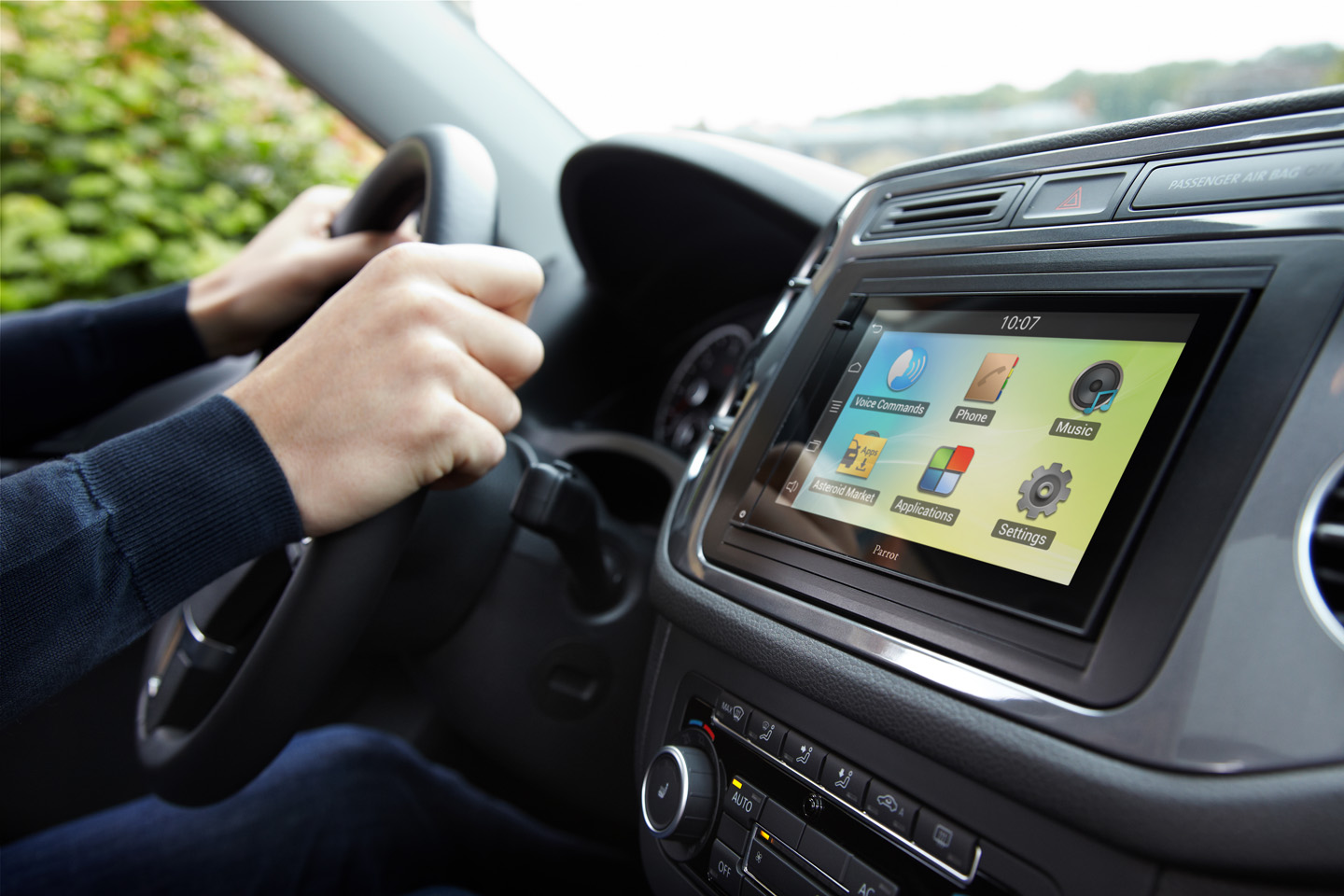 Parrot may be better known for gizmos like its A.R.Drone quadricopter and hands-free Bluetooth speakers, but recently the company ventured into vehicles with aftermarket dash units that bring Android into the mix. The Asteroid Smart is the best head unit Parrot has come out with, and shows some promise with what’s possible, despite the aged version of Android onboard.

On the surface, there’s a compelling package here. The 6.2-inch capacitive touchscreen is the natural centerpiece, vibrant and responsive despite the low 800 x 480 pixel resolution. It has Wi-Fi (Wireless-N) and Bluetooth 3.0 (numerous profiles, including A2DP and AVRCP) and both 30-pin and USB cables snaking out from the back of the unit. There’s also a USB port attached to one of the cables for plugging in thumb drives, which I’ll get to a bit later. 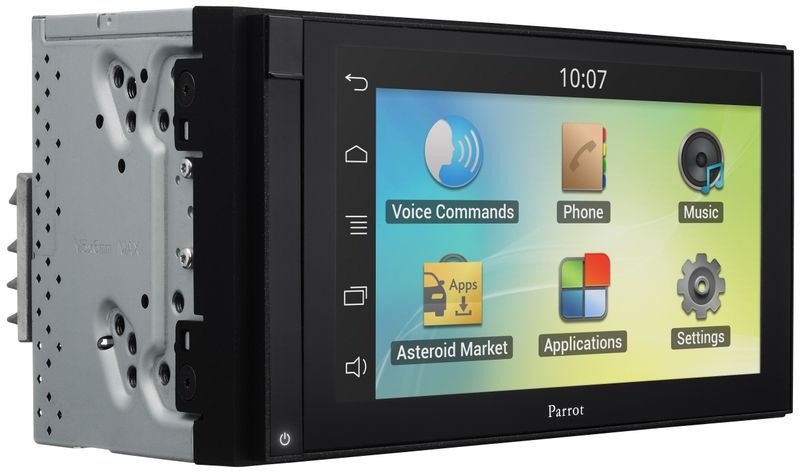 The power button on the bottom left is actually part of a panel that comes off when you slide down the handle at the top. In it is a microSD slot with an 8GB card inside (it comes standard with the unit) that essentially acts as the Smart’s internal storage. It also carries the map data from iGo, the GPS navigation app that comes pre-installed. The panel’s removal doubles as an anti-theft mechanism since it houses the power button as well. A would-be thief wouldn’t be able to turn the unit on without it, though one could argue that wouldn’t necessarily save your window from getting smashed, either, since the screen itself is still visible.

The unit’s internal storage is paltry, and you’re not beholden to the microSD that comes with the unit, so you could just as easily use a 32GB to 128GB card as a way to boost that number considerably. There’s only 512MB RAM on the unit, so there isn’t much wiggle room for harnessing the hardware’s power.

I should mention, though, that Parrot didn’t skimp out on the options. The back of the unit has four USB ports — one specific to iOS devices — plus a line-in jack, microphone jack and microUSB port for interfacing directly with a PC (which I didn’t test, so not sure how it works). The built-in amplifier has four channels at 55 watts each, so pumping big sound shouldn’t be a problem, though this also naturally depends on the speakers you have in the vehicle. The Smart does sport an effective equalizer that includes bass boost, loudness and concert hall presets, along with the option to save a customized one. 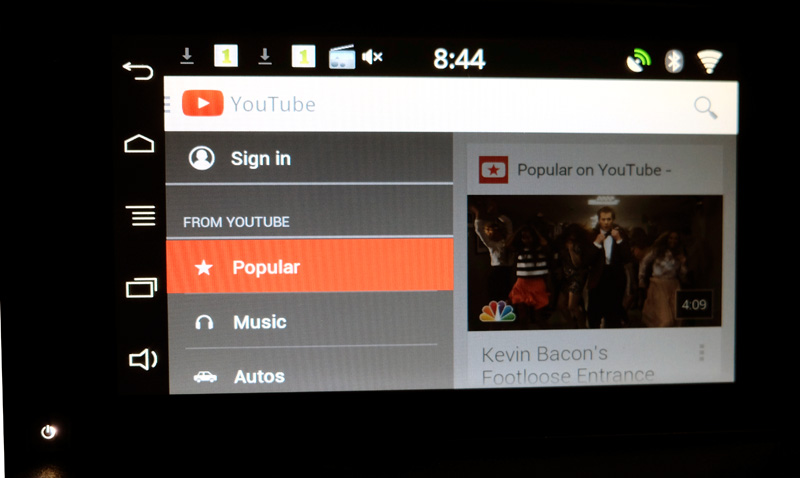 You can play music directly using an Aux-In connection (if your car has that, as many older ones don’t) or directly from a mobile device, either wired or wireless via Bluetooth. Internet connectivity also plays a large role in the Smart’s overall functionality. Naturally, you can stream music from apps like Songza or Soundtracker directly on your phone using its data connection, or create a mobile hotspot to do so with apps like TuneIn and Rdio that are available on Asteroid Market, Parrot’s curated app store.

Indeed, to download apps and update the unit itself requires connecting to a hotspot. This can be done by creating a hotspot using Wi-Fi, Bluetooth or wired when a 30-pin iOS device is plugged in. With a range up to 100 metres, it’s also not terribly difficult to connect to your home’s Wi-Fi connection when parked on the driveway, or even one at a Starbucks while parked close enough to it. The Smart’s browser app seems to handle browser-based logins fine. 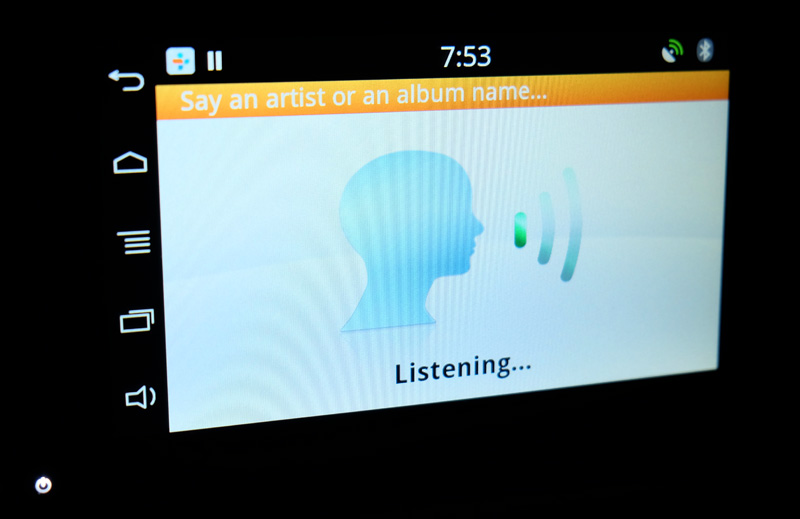 Music playback and phone calls are simplified somewhat by the excellent built-in voice recognition software. You access it directly from the home screen and tell it which artist or album you want to listen to, where it then parses your connected device to serve up the results. This functionality is also designed to work with steering wheel controls, meaning that you can get to it without touching the screen. Of course, if you don’t have those built-in or installed in your vehicle, then you just have the screen to go through.

It works consistently well with your phone’s contacts as well, equally simplifying outgoing calls for a reliable hands-free experience. The one drawback I noted with voice search was that it plucked songs from the standard music player app rather than the third-party ones that I preferred for their equalizer options. Using the Smart’s own equalizer helped, but having sonic enhancement on both ends is even better, and it’s unfortunate there’s no way around that.

The basics of this unit work well enough, yet it’s the presence of Android that is the key to the Smart, and its flexibility expands on what the unit is capable of. Out of the box, the Parrot-skinned landscape version of 2.3.7 Gingerbread that I tested is clean and straightforward, even though it isn’t particularly snazzy. The soft keys on the left will be instantly recognizable to any Android user, and despite its unique look, navigating the interface is nowhere near the learning curve of infotainment systems found on other platforms.

As mentioned, apps are relegated to an approval process that sees them end up in the Asteroid Market, where you have to sign up for an account to access them. This limits the overall number to just a few dozen as of this review — a pittance when compared to the endless supply on Google Play. The iGo GPS nav app that comes pre-installed on the included microSD card is decent, but not as good as others. Waze, NavFree and TomTom can be downloaded and used, but not Google Maps. TuneIn, Deezer and Rdio are available, but not Songza, Jango or Soundtracker. I could go on, but you get the point. 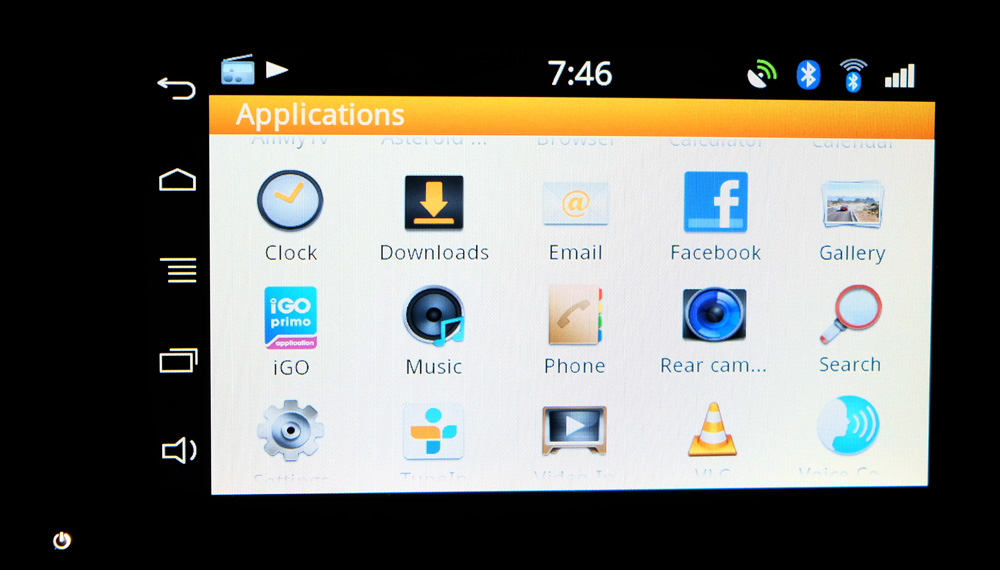 Interestingly, VLC (in beta) is available as well, allowing you to play media files stored on a USB thumb drive connected to one of the cables. This proved to be an excellent method for playing lossless WAV and FLAC music files, though the unit only recognizes drives formatted in FAT32 and in lower sizes. A 64GB SanDisk drive I tried wasn’t recognized properly, though it was formatted correctly.

Being an Android-based platform, the Smart has been designed with workarounds in mind. It supports sideloading APK files without having to root or tinker with it in an invasive way. I added YouTube, Dropbox, Netflix and 1Mobile without incident, but couldn’t get Google Maps to install because of a parsing error. The installed apps translated well to the screen’s resolution and orientation, and I had no problem playing back content on Netflix, YouTube or Dropbox. Once I had a YouTube video going, I tried driving, only to see the screen go blank after I started moving, coming back on again (the audio kept going) when the emergency brake was up, staying true to the device’s base safety features.

The only annoyance was in trying to get these files onto the unit via USB. As mentioned earlier, media files are fine, but APKs are hit or miss. After numerous attempts with different drives, I just took out the memory card, copied them over on my computer and installed them from there. The one annoying caveat was that I needed tweezers just to take the card out of the Smart.

While I didn’t root it, that is another option to open things up. Doing so allows you to completely change the UI, add Google Play, install whatever you want on it and pretty much flout the restrictions. Parrot discourages doing that because it voids the warranty but there is no physical or digital roadblock from the company to stop you from going through with it.

While Parrot might be loath to admit it, the Smart’s real star power among aftermarket head units is the very flexibility it tries to underplay. The Asteroid Market is clean and straightforward, but app selection has grown slowly since it launched last spring, making it attractive to sideload or root others into the unit. The company doesn’t have the kind of notoriety or clout that the likes of Clarion, Pioneer and Kenwood have, yet the inclusion of Android makes for a more open and flexible platform that is more upgradeable.

Of course, it doesn’t come cheap at $599.99, plus whatever it might cost to install it. You can try doing it yourself, but I recommend that you only do so if you know a thing or two about installation. Mind you, really good head units from more established competitors could run you double the price, so for what you get, this isn’t a bad deal. It’s just the trade-off — root it and do what you want, but risk getting no support if something goes wrong.

As the only true Android experience on a head unit for the car, Parrot has something that works well most of the time, and is customizable enough to attract both novices and hackers, alike.