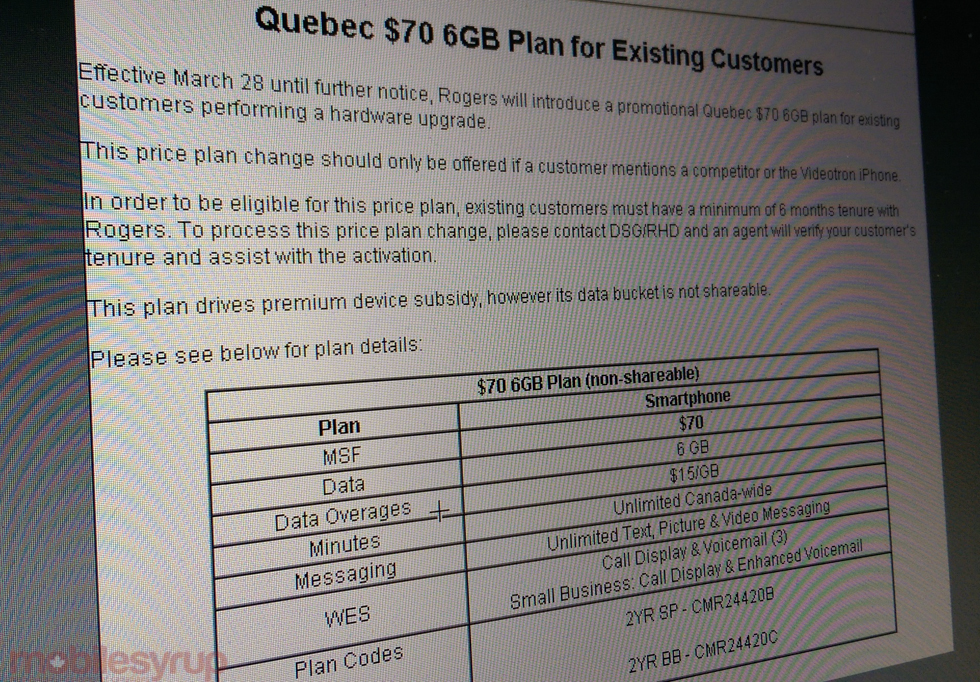 Rogers is scared of the Videotron iPhone. The company has rolled out a plan to existing customers in Quebec that offers unlimited nationwide calling, unlimited messaging, call display and voicemail 3, along with 6GB of non-shareable data for $70, but the deal is only good for those “who mention a competitor or the Videotron iPhone.”

Videotron started selling the iPhone 5s and 5c yesterday, and is beginning to roll out a shared Quebec-wide LTE network as part of a 20-year agreement with Rogers, similar to the nationwide agreement Bell and TELUS made when they launched their respective HSPA+ networks. The mobile arm of Quebecor claimed to have just over 500,000 subscribers at the end of last year, and is growing relatively quickly in a healthy Quebec market.

Videotron currently offers customers two monthly 6GB plans: a Quebec-wide unlimited calling plan for $59.95, and a Canada-wide unlimited calling plan for $79.95. Rogers appears to be comfortable sitting right in the middle, as it already has a national voice and data network, whereas Videotron has to pay roaming fees to its carrier partners outside of Quebec and Eastern Ontario. Rogers, on the other hand, offers a standard $60/3GB to Quebec customers, but it’s only compatible with a small selection of mid-range Smart Picks devices.

The Rogers bulletin mentions that customers “must have a minimum of 6 months tenure” to be eligible for the plan, and that it “drives premium device subsidy,” which is another way of saying it’s there to entice users to sign a 2-year contract. As a result, it’s only available with a contract, so BYOD users are out of luck on this one.

The plan is available “until further notice,” so hopefully it will stick around at least until the HTC One M8 and Galaxy S5 are released on April 10th and 11th respectively.