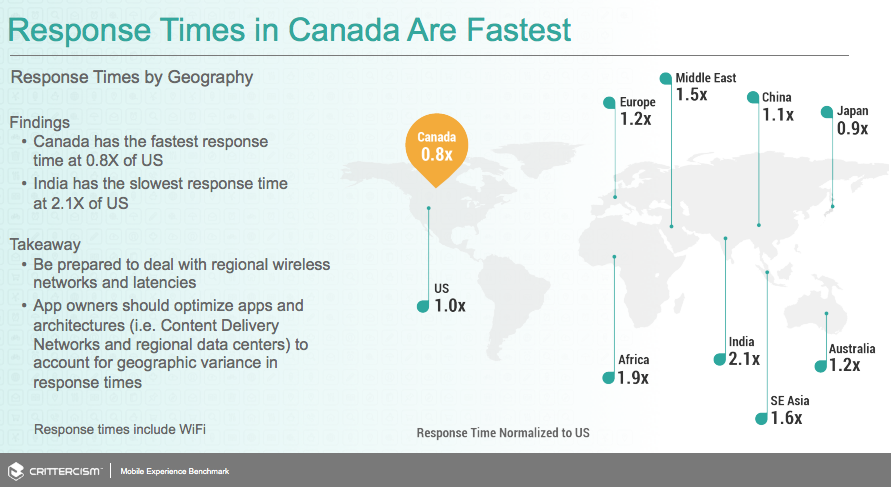 According to Crittercism, a Mobile Application Performance Management (mAPM) provider, Canada has the fastest app response times in the world, thanks to a combination of highly-developed, mature LTE networks and access to the fastest CDN’s (Content Delivery Networks) from the United States.

Compared to the US, which is used as a benchmark, app data tends to load 20% faster for Canadians than for those in the United States, reinforcing the idea that the due to the proliferation of 3G and LTE in the country, most customers, regardless of platform, have access to high-speed mobile internet.

As for the breakdown between iOS and Android, Crittercism, which studies data from over 1 billion users across tens of thousands of apps, found that iOS 7.1 is far more stable than iOS 7 and iOS 6, significantly lowering the average number of app crashes. Android apps crash less than iOS, in general, with KitKat, Jelly Bean and ICS averaging 0.7% instability, while iOS 7.1 came in at 1.6%. As a comparison, Gingerbread was 1.7% and iOS 6 was 2.5%.

Finally, apps that rely on cloud services like Twitter and Facebook APIs significantly add to the loading costs of apps across all platforms. Facebook login added an average of 669ms to the response times of the apps included in the study, while Twitter added 574ms. Google’s services, on the other hand, were much more efficient.