As expected, LG G2 owners on various Canadian carriers can now update to KitKat (OS 4.4.2). This is coming in at 635.99 MB and we’ve received tips that Rogers and Bell customers can now go forth. Check your G2 and let us know if it’s arrived on your device and what carrier you’re on. Settings >> About Phone >> Software update. 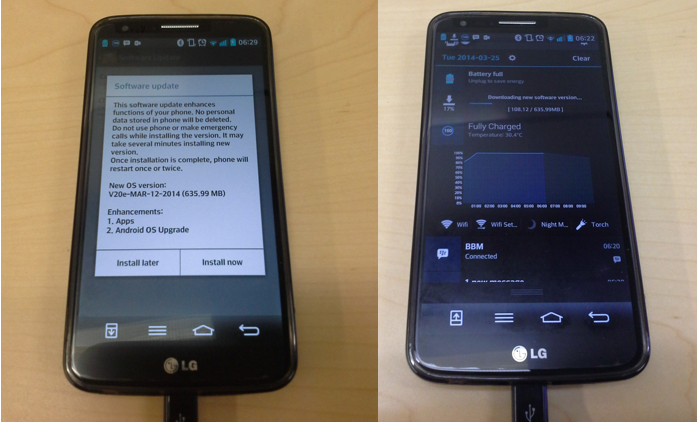 The update brings lots of little enhancements to the overall Android experience, but users will be disappointed to know that KnockCode, which was announced on the G Pro 2, is only going to be activated in Q2 via another software update. A press release describes KnockCode thusly: “Building on the G2’s existing KnockOn feature – which lets users knock the display to wake up the phone – LG is also announcing another upgrade for G2 with KnockCode in early Q2.  KnockCode is a unique new function that allows users to select a knock pattern to unlock their smartphone.  Knock the pattern on any location of the screen and the phone will unlock.”

Android 4.4.2 for the G2 reportedly improves battery life, as well as performance. Support for Google Cloud Printing has also been added.