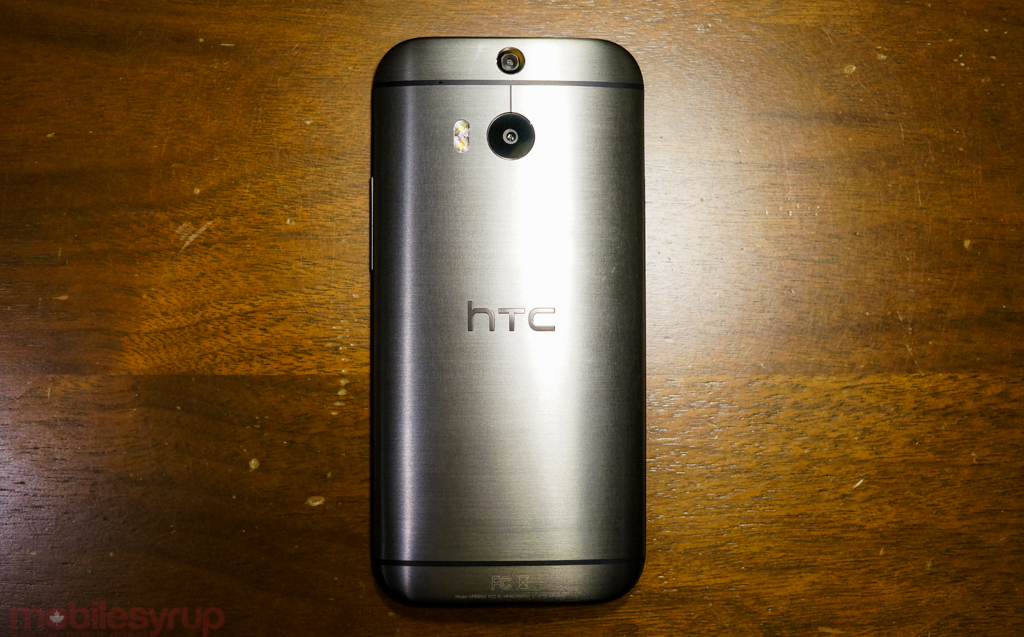 The HTC One, a year later, is still one of the most polished and well-designed Android experiences ever crafted. From its tasteful Sense UI to the aluminum chassis, there were only a few nagging issues with various individual components, the feedback of which HTC heard loud and clear.

Though the company has had a troubled year, with poor earnings and a more-than-shaky future, you’d be hard-pressed to find a seam out of place with the launch of the all-new HTC One. Though it bears the same name as its forebear, this year’s version is like holding a piece of art in your hand. It’s made from a single piece of machined aluminum, more akin to the Sensation than its immediate predecessor. More impressively, HTC has distributed the weight in such a way that holding a 160 gram piece of metal feels neither heavy nor fragile; indeed, they’ve taken what has traditionally made Apple devices so good — their solidity and artfulness — and expanded those characteristics to a 5-inch device.


It is immediately apparent that this year’s version is a completely different animal. The original HTC One had seams, if you knew where to look — pieces of aluminum and plastic forged together to look uniform, but lost their veracity as the months went on. Though the new HTC One will scratch — our demo unit is already full of fine protrusions — it will also age extremely well. 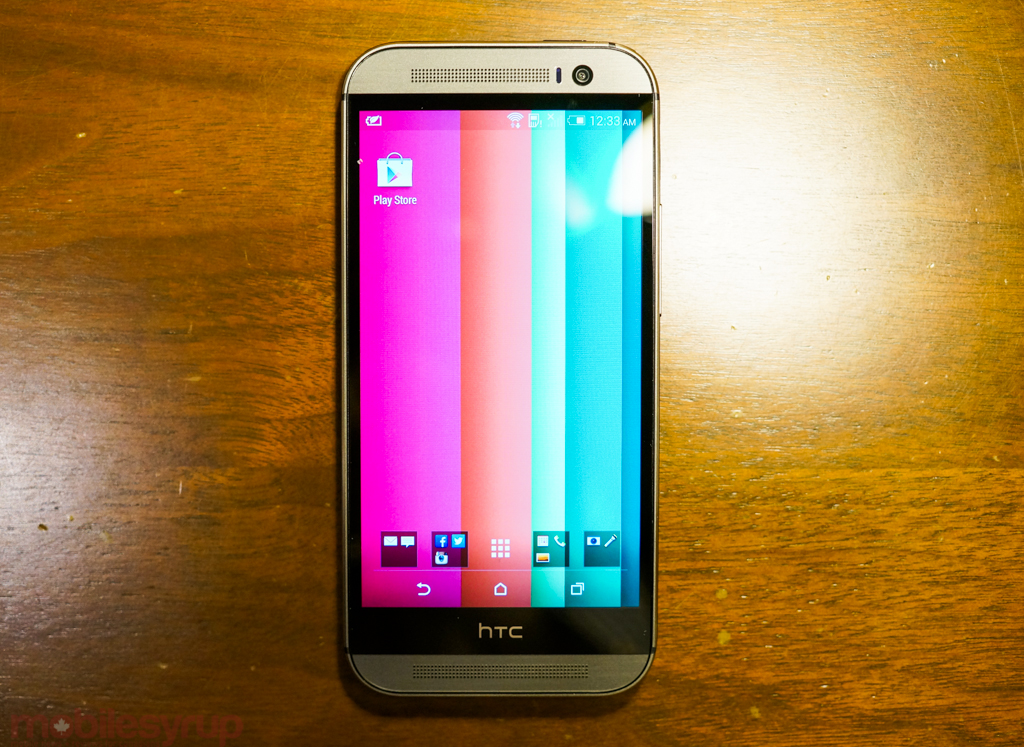 Fine touches, like an austere black border surrounding the raised Gorilla Glass, reinforces the idea of refinement. The rounded corners are wider and more pronounced; the edges curl up gently, CNC machined to an exquisite finish. HTC won’t reveal the margins on this device, but they can’t be very high.

The company has also addressed many of the pain points from the original: the power button is now on the top right, making it much easier to reach with one hand (provided you’re right handed; lefties are going to be mad); there is a microSD slot in addition to 32GB of internal storage; the headphone jack has been relocated to the bottom; the volume rocker, still a single piece, is less entrenched in the chassis, making it easier to hit without looking; there is a piece of inconspicuous black plastic at the head to enhance antenna performance; and there are no more capacitive buttons. 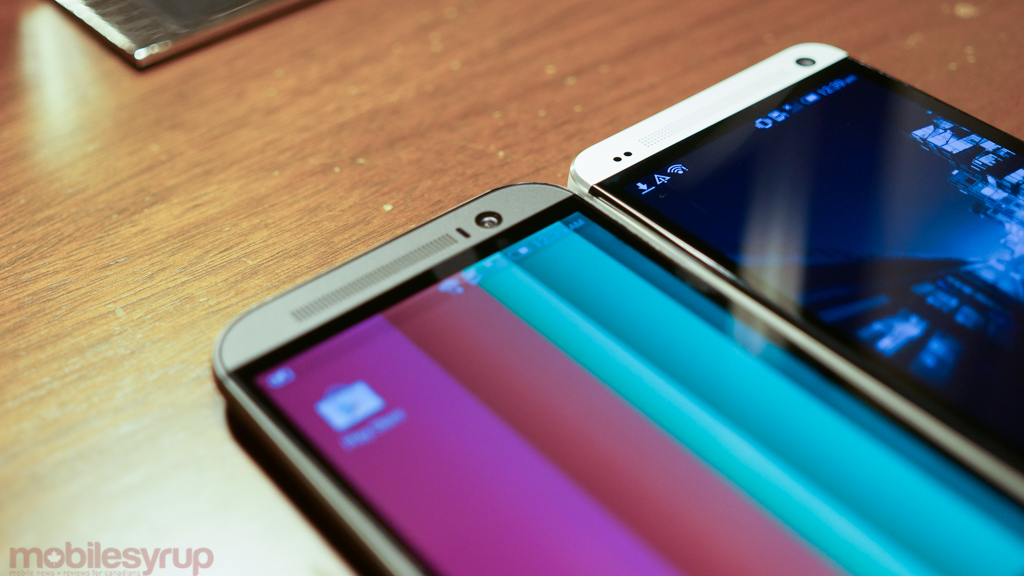 It seems that HTC compiled a big list of what needed improving — better build quality, CHECK; remove stupid capacitive buttons, CHECK — and just iterated. This is what I like to see.

Of course, flipping the device around reveals not only a brand new hardware feature, but perhaps the most interesting and yet-unsolved puzzle of the whole deal: a second camera to complement the first Ultrapixel sensor. Leaving aside for a moment the addition of a dual-toned flash, what does the second sensor give us? More data; depth and 3D perception tricks. 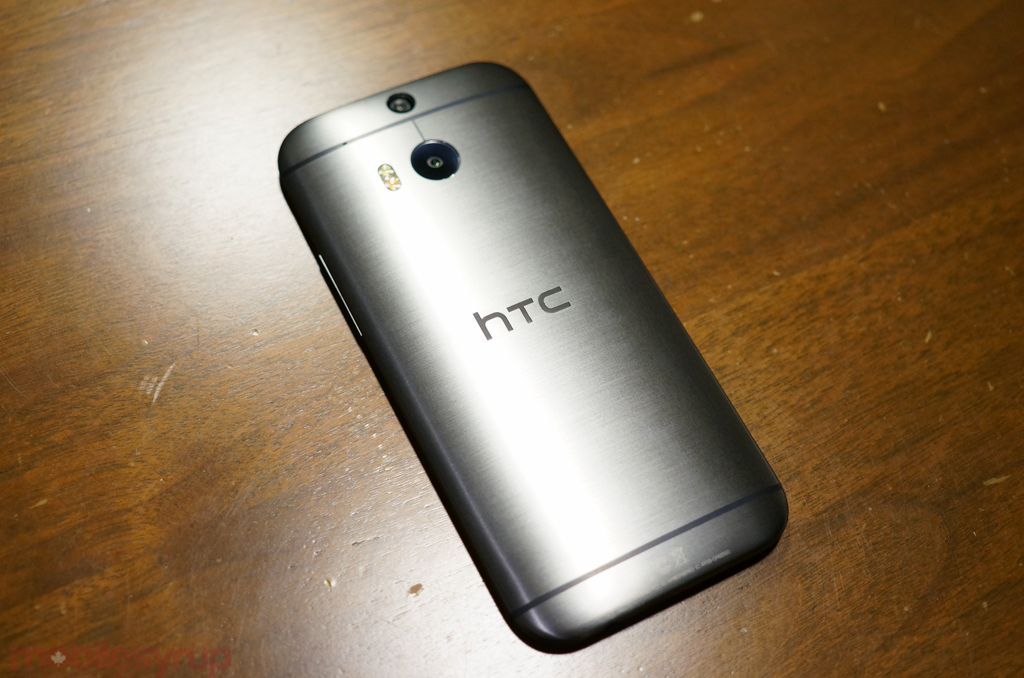 The photo-taking experience, enhanced by the much improved ISP (image signal processor) inside the 2.3Ghz Qualcomm Snapdragon 801 chip, is a treat. HTC has slightly overhauled the UI, but it’s in the editing features that the richness truly shows itself. With all the extra photo information from the second sensor, the new HTC One can do a considerable number of tricks, some gimmicky but many truly useful.

It’s now possible to selectively refocus an image from the foreground to the back, and vice versa. Because the two sensors simultaneously capture a scene at various focal lengths and focus levels, accomplishing this is not merely a digital trick of the eye, as with the upcoming Galaxy S5, but a bonafide use of that extra data. It’s astounding. 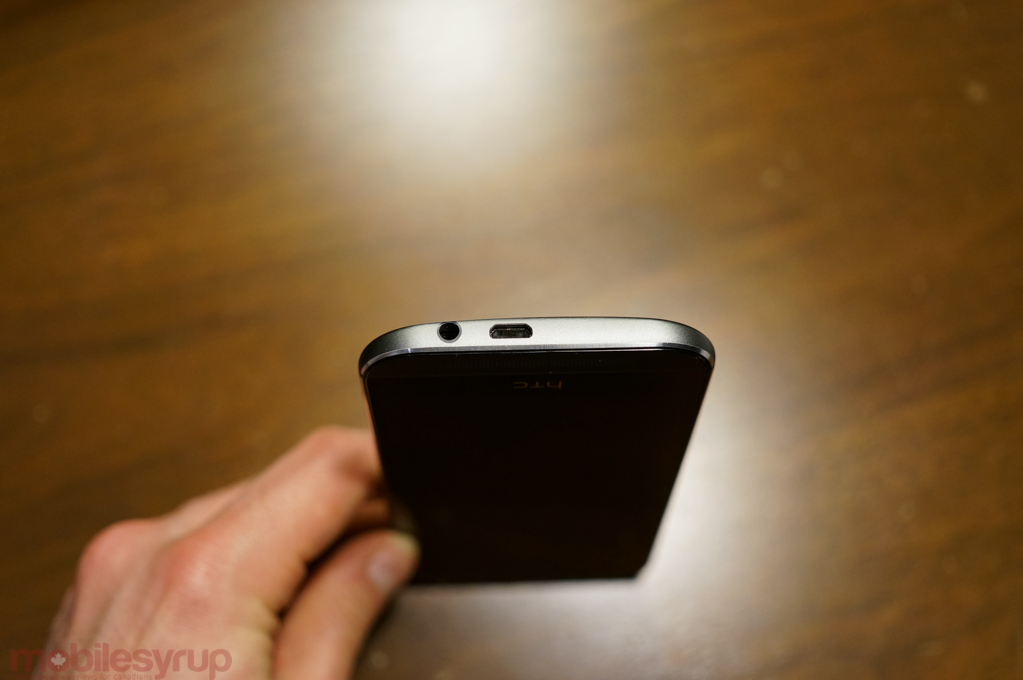 Next, it’s possible to add 3D effects which, combined with the accelerometer, shows off a strange and discomfiting 3D plane on a 2D screen. This isn’t exactly the HTC Evo 3D, but it’s amounts to little more than a party trick at this point. More interesting is the phone’s ability to pick a foreground object and play with it: for example, the editing suite will colorize only a single object, leaving the rest black and white.

Of course, the regular retinue of capable HTC shooting options have returned, but now they’re more comprehensive, and a full Manual mode allows for adjusting everything from exposure to white balance to ISO and beyond. Zoe Shot has made its return — the ability to capture photos and small snippets of video at the same time — but the processing has improved, as has the speed. 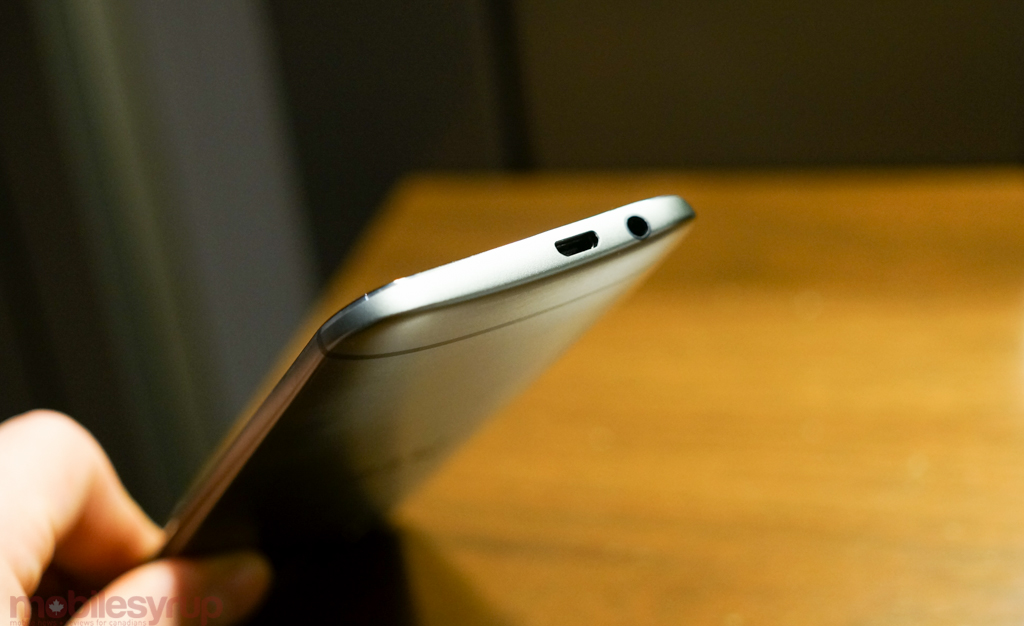 What’s perhaps more interesting is what HTC has omitted: there is no 4K recording, which will put the company once again at odds with the various spec sheets of its competitors, namely Samsung and Sony. Still, we haven’t found most 4K footage to be compelling on other devices — or usable; the proliferation of Ultra HD televisions has been slow, and the storage space is an unnecessary sacrifice for a small return on investment. 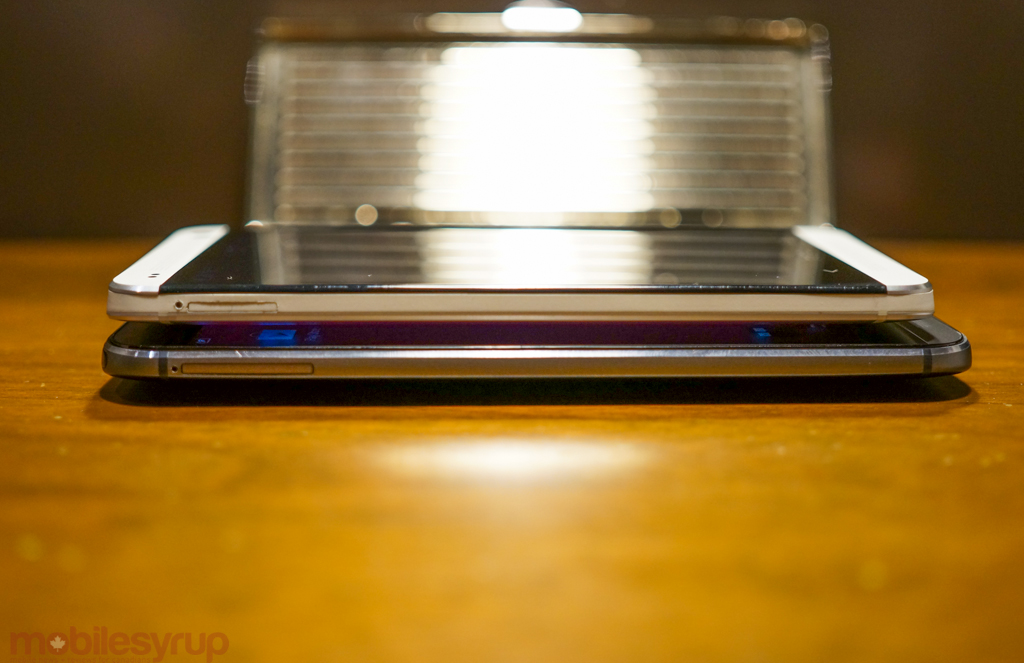 We haven’t had a chance to delve greatly into the rest of the software just yet, but I did get a chance to try the new motion gestures, many of which are found on other devices but not quite to the same extent as on the new HTC One. For example, double-tapping wakes the phone, but swiping from the bottom unlocks it; swiping from left to right reveals an all-new BlinkFeed experience, which is much more customizable and potentially more useful (though it can still be hidden if desired). 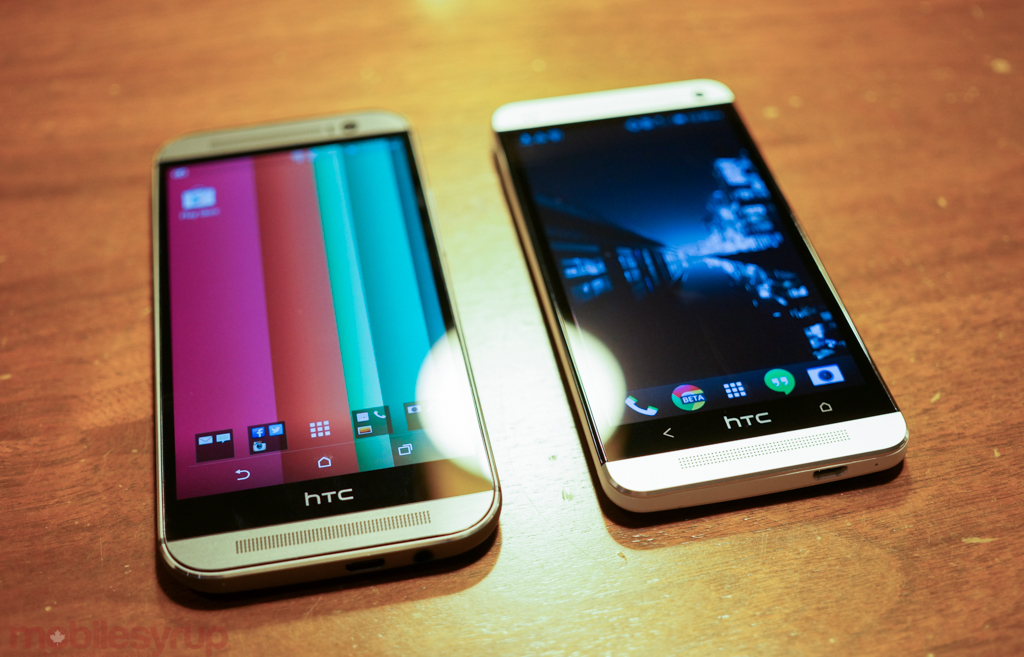 As for the screen, the all-new HTC One’s 5-inch 1080p display is still Super LCD3 and doesn’t appear of a higher quality than last year’s still-superlative display. This is a fantastic smartphone screen, with fantastic viewing angles and great touch response. That it’s slightly less dense may irk some users trying to avoid a “downgrade” in specs, but the amount is so negligible as to be non-existent. The BoomSound speakers, however, are quite significantly improved, with deeper bass and less obvious clipping at higher volumes.

We haven’t yet tested voice calls on the phone, but we expect they will sound just fine. 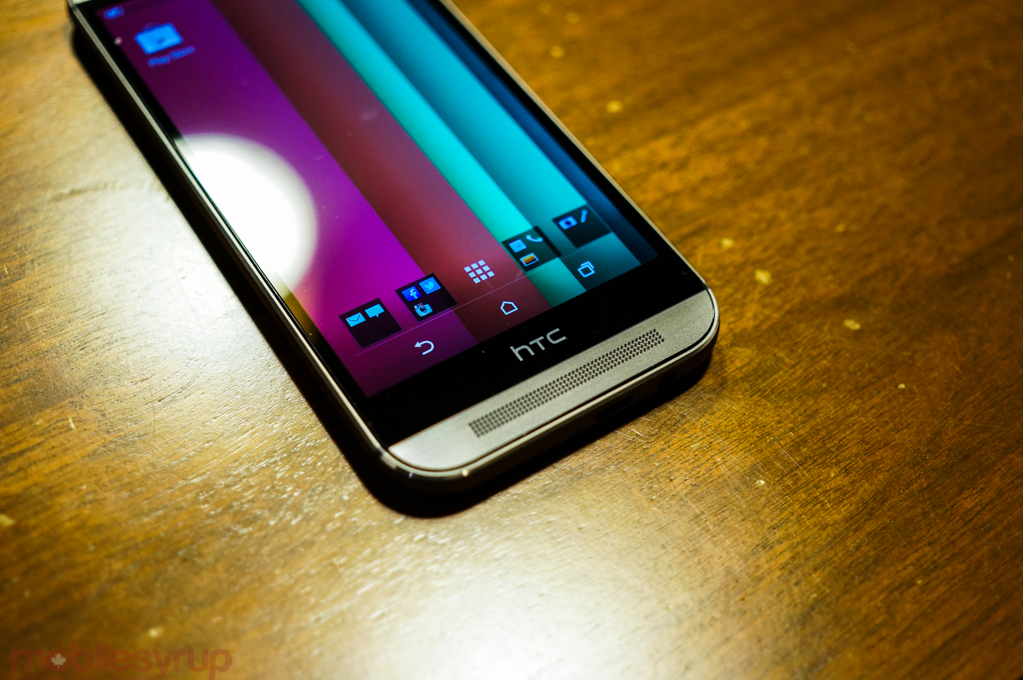 The all-new HTC One employs the nano-SIM standard, so iPhone 5/5s users will be happy to know they won’t need a new SIM card. We’ll be test driving the remainder of the software, and putting the hardware, including the camera, battery and CPU performance, through its paces in the coming weeks. Until then, let us know if you’ll be buying the all-new HTC One when it becomes available on April 10th.