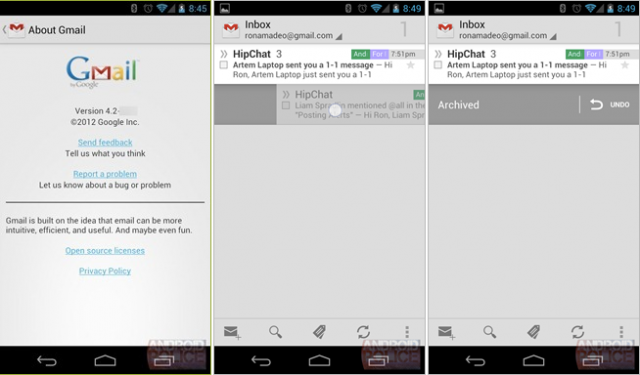 We have some exciting news for long-suffering Android users patiently waiting for a feature that arguably should have been included since the beginning. Google is set to add pinch-to-zoom to its next version of Gmail, presumably to be added to the final build of Android 4.2 when the Nexus 4 launches next month.

AndroidPolice obtained exclusive access to the .APK file, which seems to work without issue on Android 4.1 Jelly Bean. Besides the obvious improvements, Google has added some subtle things such as swipe right to archive/delete, as well as reporting phishing from inside the app.

It may not seem like a significant inclusion but, my goodness, has this been a long time coming. There have been times when I’ve sought out third-party email clients just to be able to zoom out of emails that, for whatever reason, arrive in a format for the legally blind.

You can check out a preview video after the break. Android Police says it’s working on obtaining permission to release the .APK to rooted Android users running Jelly Bean, but we’re sure other copies will crop up in the near future.