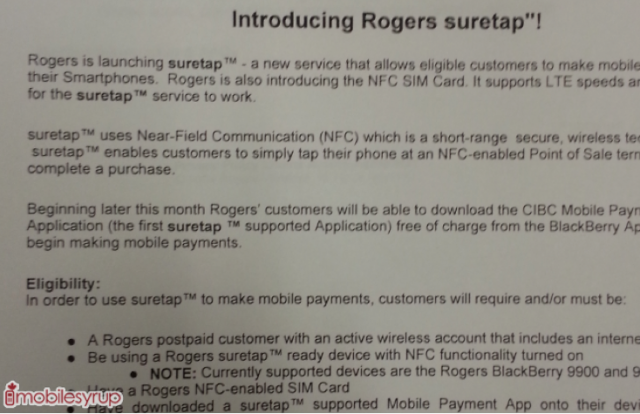 Rogers and CIBC announced in May that they’ll launch “the future of mobile payments in Canada” sometime “later this year.” This partnership allows customers with an NFC-capable BlackBerry device to spend up to $50 on their CIBC Visa or MasterCard by simply tapping device to a terminal.

We have a demo of this service in action here, but according to an internal doc we received Rogers is on the cusp of going live with the service, now called “suretap.” Here are the details we know:

– To use suretap you have to be a Rogers wireless customer
– BlackBerry Bold 9900 and Curve 9360 are the only NFC-enabled devices currently supported, but “more devices coming soon”
– Customers will have to have a NFC-enabled SIM card, apparently has a SRP of $12.99, but “existing customers with suretap ready phones should be issued an NFC SIM wherever possible”
– To use suretap you’ll have to download the “CIBC Mobile Payment Application” from the BlackBerry app World and “download their credit card credentials via the app.”

The doc states that this will be available “later this month.” No word on if those “more devices coming soon” will include other BlackBerry devices, such as BlackBerry 10, or if it’s iOS, Android, or Windows Phone 8. We’ll keep you updated on the official launch date, but looks like this is the first step towards true mobile payments in Canada.