Update: Samsung has to pay $1,049,393,540 in damages to Apple for patent infringement, official statements released 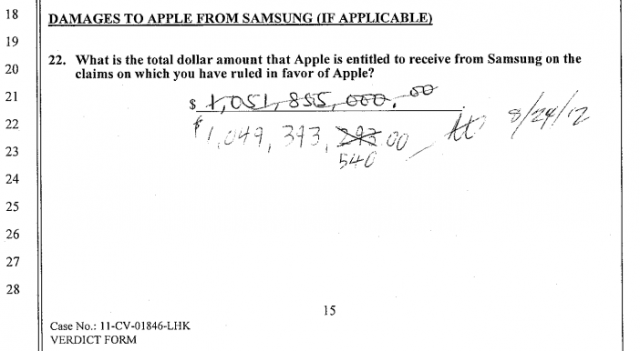 The Apple vs. Samsung case has been happening over the past several weeks and word is that the jury has reached their decision. Apparently the Apple and Samsung attorneys are in the room, missing is Judge Koh.

Apple and Samsung have locked heads over the design and accused each of patent infringement. Apple specifically declared that Samsung has knowingly copied the iPhone’s design and the look and feel iOS. Both companies have requested the court for damages, Apple seeking a whopping $2.5 billion and Samsumng for $450 million.

The jury, which reached their decision today at 2:35PM (PT), had deliberated over the past couple days and had to hammer through 700 decisions.

This is still developing as there’s lots of news coming out of the courtroom. Bottom line, the jury has decided that Samsung’s devices have a similar design and feel to Apple’s, thus they have infringed on Apple’s patents. No word yet on the dollar amount of damages.

Update #2 :Holy crap. Damages total the massive amount of $1,051,855,000. Huge. Over a billion dollars. As for the Samsung patent counter-suit, the jury decided that Samsung is awarded no damage claims. Samsung was denied. Both Apple and Samsung are reviewing the verdict… will be interesting how this impact their relationship for manufacturing chips and displays.

Samsung has officially released a statement on the verdict, basically dissapointed 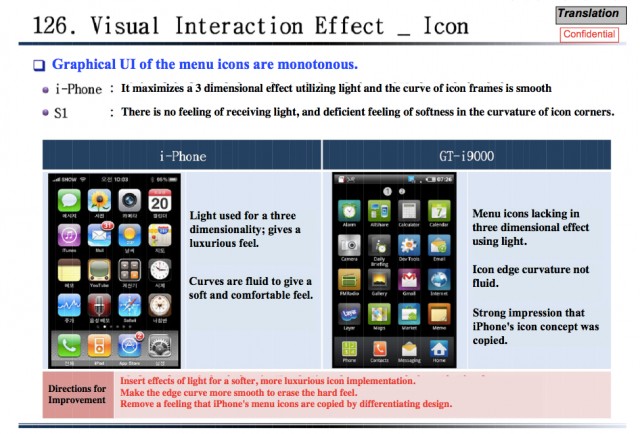 “Today’s verdict should not be viewed as a win for Apple, but as a loss for the American consumer. It will lead to fewer choices, less innovation, and potentially higher prices. It is unfortunate that patent law can be manipulated to give one company a monopoly over rectangles with rounded corners, or technology that is being improved every day by Samsung and other companies. Consumers have the right to choices, and they know what they are buying when they purchase Samsung products. This is not the final word in this case or in battles being waged in courts and tribunals around the world, some of which have already rejected many of Apple’s claims. Samsung will continue to innovate and offer choices for the consumer.”

And… Apple has now released their statement. Of course, pleasantly thrilled.

“We are grateful to the jury for their service and for investing the time to listen to our story and we were thrilled to be able to finally tell it. The mountain of evidence presented during the trail showed that Samsung’s copying went far deeper than even we knew. The lawsuits between Apple and Samsung were about much more than patents or money. They were about values. At Apple, we value originality and innovation and pour our lives into making the best products on earth. We make these products to delight our customers, not for our competitors to flagrantly copy. We applaud the court for finding Samsung’s behavior willful and for sending a loud and clear message that stealing isn’t right.”

Update #3: Apple is taking it to another level now. A hearing will be held on September 20th at 1:30PM (PT) to determine if Apple will be granted a preliminary injunction against Samsung to have them stop selling their devices that infringed on their patents.

Update #4: Samsung has come forward and also noted that they plan on appealing the decision. Stating that “We will move immediately to file post-verdict motions to overturn this decision in this court and, if we are not successful, we will appeal this decision to the Court of Appeals.”

Update #6: Here’s the final and complete jury submission that indicates the damages owed.

Via: The Verge, NYT, AllThingsD & ArsTechnica