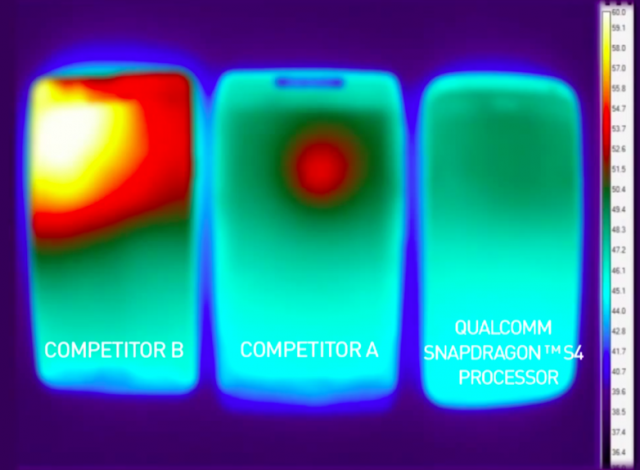 Qualcomm has chosen a very interesting way to show off the thermal efficiency of its Snapdragon S4 chipset. In a video released this week, the team decides to place a piece of butter on the back side of three modern devices: a Samsung Galaxy S II (Exynos 4210), a Motorola RAZR (TI OMAP 4430), and a Snapdragon S4 demo unit, comparing the thermal performance of each one.

According to Qualcomm’s Vidyasagar Rao, butter melts at 25 degrees celsius, so placing a stick on top of each phone (covered in a piece of thin plastic, obviously) shows the S4 keeping its cool, maintaining a temperature of under 30 degrees celsius for the most part. It looks like the Motorola RAZR heats up to 55 degrees, while the Exynos 4210 is a bit more efficient.

The video is certainly a fun way of showing off exactly how the improvements in Qualcomm’s proprietary ARM Cortex-A15 design (or close enough), but it’s most likely the change to a 28nm manufacturing process that really did the trick in heat output. Hit the break for the full video demonstration.