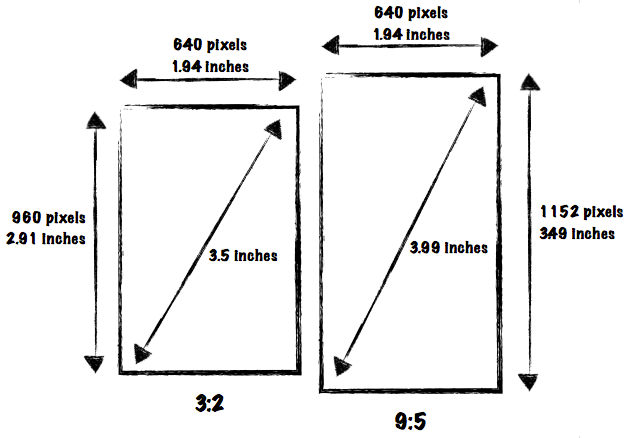 The new iPhone is already the subject of much speculation as we near the halfway point of the iPhone 4S’ annual release schedule. While some pundits are saying Apple will launch its next iPhone in the summer, common sense leads us to believe that they are going to adopt a new fall release plan to replace its aging iPod Touch announcement routine.

A Verge reader has adopted a theory expounded by another, addressing how Apple could adapt the iPhone to a larger screen size while maintaining most, if not all, of the functionality of the current models. He posits that a 4-inch iPhone with a screen resolution of 640×1152 (at an aspect ratio of 9:5) could make it very easy for developers to adapt their current apps, or to leave them as-is, without disrupting the entire ecosystem. Such a move would maintain a “Retina” pixel density of 330 while addressing many of the concerns of the current user base, namely that the iPhone 4S is too small.

There are millions of users who would disagree with this, however, saying that the 3.5-inch screen size is the only way to allow the average user to reach his or her thumb to the top left corner without strain. Many other prospective buyers would argue that 4-inches is the sweet spot (including myself) and that Apple would be able to get away with the size increase without alienating its current users.

The slightly elongated aspect ratio (the current iPhone is 3:2) would place small black or grey bars at either side of an unmodified app, while updated versions would be able to keep the horizontal design the same, adding half an inch of extra information to the screen. This would mean significantly more text would be visible on a book, a web page or a vertical list, while videos displayed in landscape mode would either be cropped slightly, or have the aforementioned black or grey bars.

My only reservation in adopting this rather brilliant compromise is that 9:5 is not a widely-used industry standard for media, but as the reader explains, 9:5 is much closer to the standard 16:9 ratio than 3:2, meaning less detail would be lost in the long run.