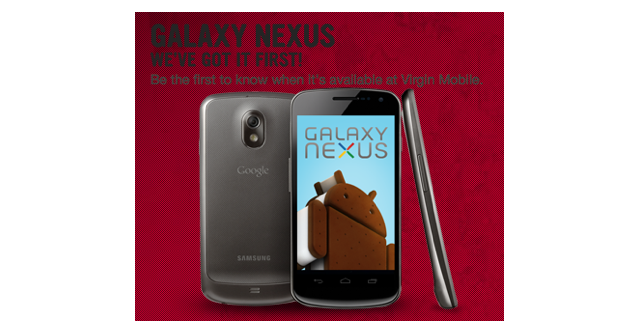 The Samsung Galaxy Nexus is officially coming Canada – you would think that parent-company Bell wanted to be first to announce the news, but Virgin Mobile has broken the news by stating they will release the anticipated Galaxy Nexus with Android OS 4.0 Ice Cream Sandwich “early December”. The press release also stated that “Google lovers can pre-register starting today!”, … it’s now live here. No word yet on price points.

“Samsung’s ongoing collaboration with Google has resulted in a next generation smartphone that has both superior functionality and a stunning user-experience,” said Paul Brannen, Vice President, Mobile Communications at Samsung Electronics Canada. “The large, responsive HD SuperAMOLED screen offers users full 720p video playback on the device, and accommodates the new Android 4.0 user interface that is based on soft keys.”