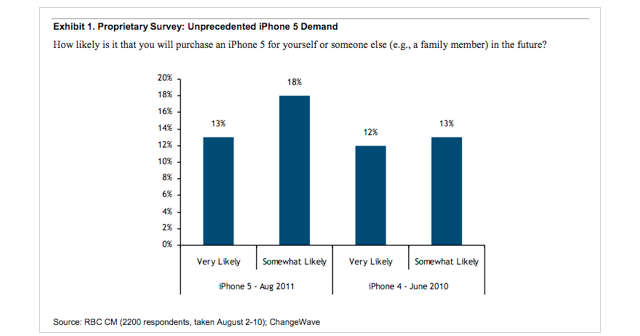 Yesterday an HTC exec that stated “iPhones are not that cool anymore”, but today is another day and new stats from RBC/ChangeWave survey reveals that 18% of people polled are “somewhat likely” to purchase the iPhone 5. Apple has yet to give any indication of the launch dates, rumours around the web and from analysts are all pointing to an October availability.

The survey was conducted between Aug. 2nd and 10th of 2,200 people and asked the question “How likely is it that you will purchase an iPhone 5 for yourself or someone else (e.g. a family member) in the future?”. The results were compared to the anticipation of the iPhone 4 and there’s slightly more interest this year. 13% stated they are “very likely” to purchase and 12%, compared to only 12% last year. So according to the poll the combined total for those “likely” to purchase the iPhone 5 is 31%, up from 25% from the pre-launch of the iPhone 4.

The iPhone 4 was launched June 2010, a stunning 15 months ago, Mike Abramsky of RBC Capital Markets says that because of the “unprecedented iPhone 5 demand” he’s raised his outlook for fiscal 2012 iPhone sales by 5 million to 110 million (Q1 accounting for 27 million units).