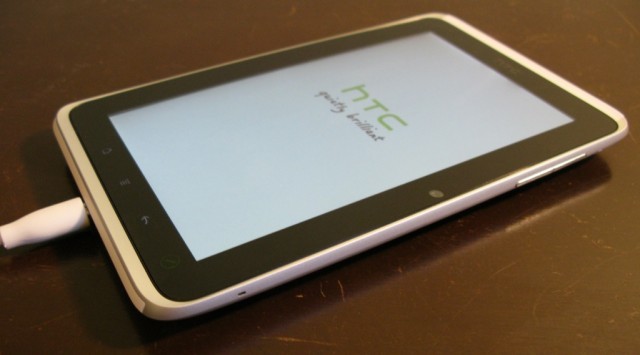 The HTC Flyer is a tablet, but it’s running a phone OS. Sound familiar? The Samsung Galaxy Tab, also a 7″ Android tablet, was released last year to mildly positive reviews, ran on a modified version of Android 2.2 Froyo, and ended up being a quiet hit. At the time it was the only real Android tablet, an alternative to the quickly growing iPad, but the 7″ tab never seemed to go mainstream. Sure, there is the PlayBook, and perhaps the Viewsonic GTab, but in the Android market, especially since the release of Honeycomb, Android 3.0, bigger has been better.

HTC decided to go another way with the Flyer, sticking with the smaller form factor and a phone OS. But there are enough changes afoot to consider the Flyer a unique beast, so let’s dive in headfirst and take a look. 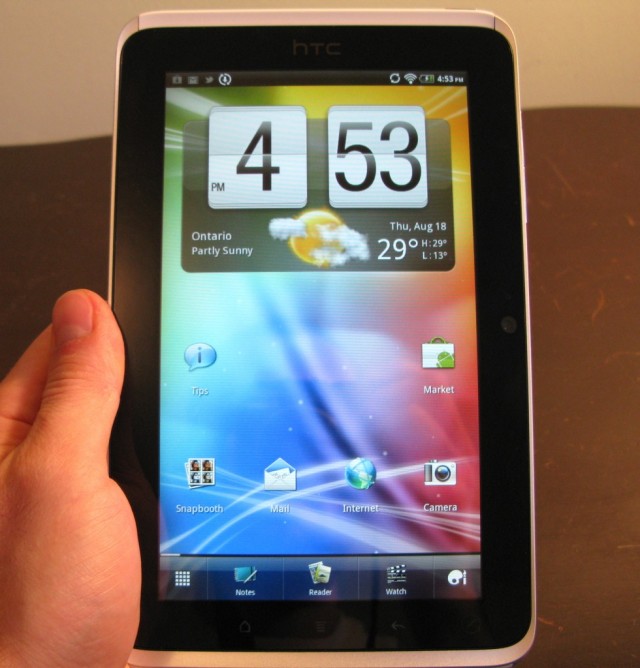 Certainly more sturdy than the Galaxy Tab or the Playbook, the Flyer is made of brushed anodized aluminum in a unibody form factor that is thin, sleek and attractive. While some might be turned off by the white-on-silver design, we found it did not interfere with day-to-day usage. The 7″ screen is bright and vivid, with excellent viewing angles and good touch sensitivity. Only recently have N-Trig digitizers become good enough that touch sensitivity is equal to that of a stylus on a capacitive screen.

We enjoyed holding the device which, at 420g, can easily be grasped in one hand for reading or surfing. The back is slightly rounded, aligning almost perfectly with the contour of the palm. It can also easily be rested between the thumb and pinky finger to hold it upright without strain.

The 5MP camera is  not without its flaws, especially since there is no flash, but in good lighting the Flyer takes decent photos. There is more grain, and certainly less detail, than the average high-end Android phone camera, but we doubt HTC designed the Flyer for taking your best shots. Video shot at 720p is muddy and without life, so we’d stay away from filming anything important on the Flyer. The 1.3MP front-facing camera supports video calling in apps such as Skype, Fring, Qik, Tango and, hopefully soon, Google Talk. 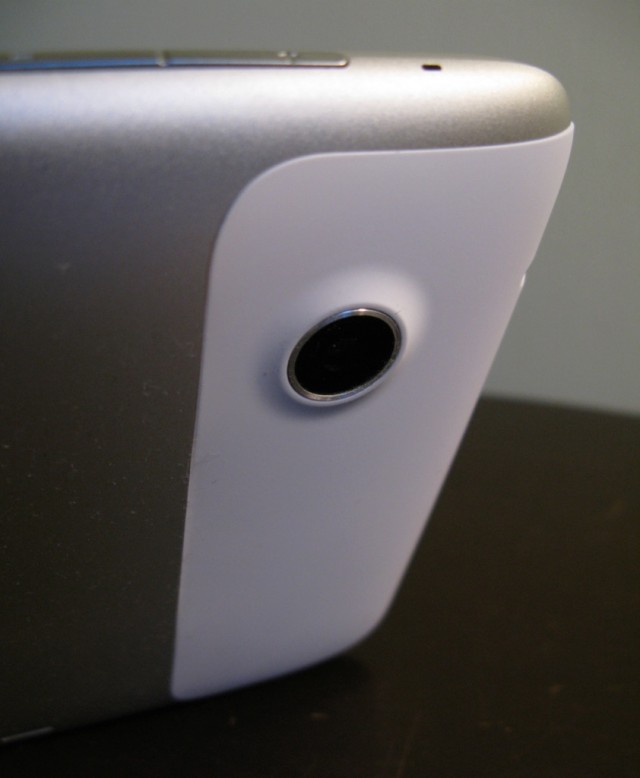 We had no complaints about the day-to-day performance of the Flyer. About what you’d expect from a device like the Infuse 4G, HTC has optimized Sense to take advantage of the extra RAM, and the 3D effects littered throughout the UI rarely stumble. The browser loads pages quickly, though Flash performance does not match that of its Honeycomb tablet brethren, most of which run dual-core Tegra 2 processors.

The Flyer performs extremely well as an eReader, and there are plenty of apps to choose from. Pre-installed on the device is a store powered by Kobo, and many of the same features from the Kobo app exist natively: animated page turns, font size and selection, bookmarks, annotations. Apps like Kindle, Kobo, Aldiko Reader, and our favourite, Moon Reader+, all do their jobs admirably, scaling up to fit the 7″ screen.

HTC bundles the new Watch app on the Flyer, which allows you to buy or rent various shows or movies, ranging from $3.99 for a 48-hour rental to $19.99 to purchase a new release. Quality is good and videos can be stored on the device for offline viewing (though there is a limit based on the amount of space available on the internal storage). Unfortunately you cannot store these files on your microSD card for security reasons.

Along with Watch and Books, the Notes app sits on a permanent dock near the bottom of the screen, next to the App Drawer. Notes functions as an all-around information consolidator, where you can draw, type, record or photograph your surroundings. These notes can then be imported into Evernote, a modified form of which is bundled with the Flyer. We found this to be extremely useful for lectures and meetings, and students, especially when paired with a wireless Bluetooth keyboard, will find lots of good uses for the Notes app/pen combo.

The rest of the experience is typical Sense: a robust mail experience, though slightly optimized for tablet use. When shifting to landscape mode the app shifts into two panes, left for the emails and right for the content. Similarly the Weather app has been expanded into a kind of dock mode, where you can view the weather, set an alarm or timer, or just watch the clock.

The lock screen has four customizable icons which you drag into a circle to quickly launch that app. The function is identical to Sense 3.0 on phones, and works just as well here. There is also a News app, into which you can sync RSS feeds trawled from various web pages you visit inside the browser. The synchronization is seamless and wonderful for bookmarking pages you wouldn’t otherwise remember to revisit. 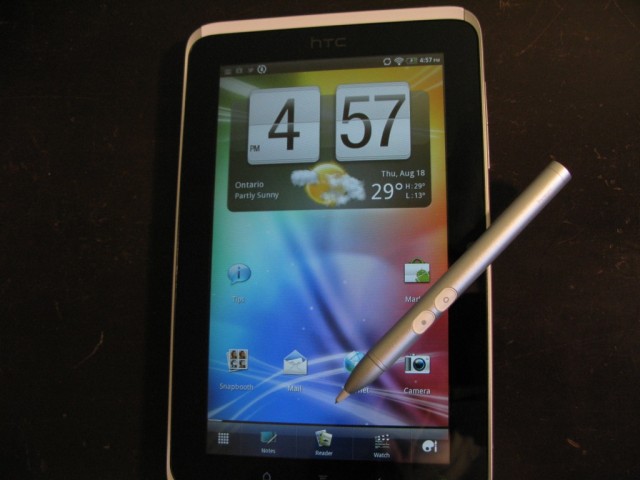 The N-Trig-powered Scribe pen is an interesting addition to the Flyer, and will be either used all the time or not at all. For students, lecturers or anyone who relies heavily on brainstorming or note-taking, the pen, in combination with the Notes app, will be indispensable. Because there is nowhere to stow it inside the Flyer, and since it is so large, we foresee many buyers eschewing the pen altogether and going without it. But it has more functionality than just jotting notes.

Tap the screen anywhere with the tip of the pen and a screenshot will be taken of that exact moment in time. Draw, trace or write on the screen and share your creation with any app that supports it, including Facebook, Twitter or email. We found ourselves using this feature a lot more than expected; evidently we think everything we find on the internet is fascinating to our friends. More so than that, HTC has released a Pen SDK for which developers can write and ultimately sell apps based on this stylus technology. Whereas now functionality is limited to apps pre-installed on the Flyer, and anywhere else in the OS it will function only as a screenshot-taker, a few months from now it may be a different story. Depending on the complexity of the SDK and the monetary potential of releasing apps for just one tablet, there may be some interesting offerings down the road. 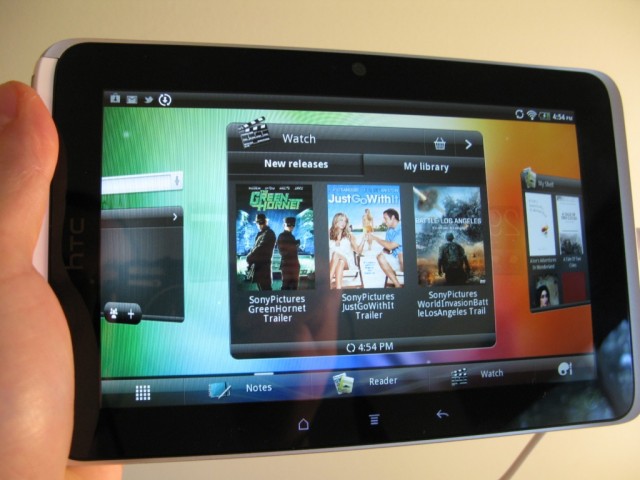 A beautifully-constructed tablet that performs well on most of Android’s most laborious tasks. Easily held in one hand, the Flyer is the obvious choice for someone looking to combine basic web surfing, note-taking, eReading and the occasional movie into a very portable device. The screen is bright, with excellent colour saturation and viewing angles. Performance is consistently good, and there is plenty of storage space. And with the digital stylus, this may well be the perfect students’ tablet.

Old before it was even released, HTC chose to launch the Flyer with a non-tablet OS. While most phone apps run perfectly on it, buyers will be missing out on the growing library of Honeycomb-optimized applications which take advantage of specially-built APIs. While the native apps do a great job at filling the gap, for $499 it runs a bit expensive, especially since the Scribe pen is extra. Similarly-priced Android tablets, such as the upcoming Samsung Galaxy Tab 10.1, are faster, sleeker, and more future-resistant.

*In the video, we mention that the Scribe pen is included in the price of the Flyer tablet. Our apologies for the error!

Check me out on Twitter @journeydan, and don’t forget to follow @MobileSyrup for all the latest news!