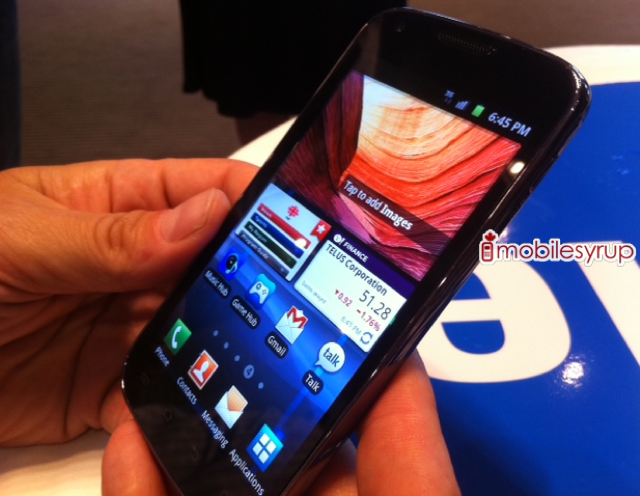 Canadian citizens alert! Say hello the TELUS Samsung Galaxy SII “Hercules”. At the wicked Samsung Mobile concert last night in Toronto there was a VIP event and I snapped a pic of an unreleased unannounced device that must to be heading to TELUS. Don’t know who was that held this beast, but this looks like it’ll be be the next power Android to come to Canada.

As for the design, it appeared to be a cross between the Samsung Galaxy SII, Nexus S and the Galaxy S Infuse. The device had sleek curved edges and a massive display that looks bigger than the GSII, but more similar to the Infuse at 4.5-inches. It’s rumoured that this will come with Android OS 2.3 Gingerbread, a 1.2GHz dual core processor and could be the first dual carrier 42Mbps smartphone in Canada. Apparently this also has an 8 megapixel camera that shoots 1080p videos like the GSII. Taking a look at the image it shows a front-facing camera, possibly 2 megapixel.

TELUS has been MIA over the past few weeks from all the powerhouse devices, launching entry level Androids for the back-to-school time frame, but in true TELUS form it simply seemed they were waiting for the right smartphone to come along… the Hercules is that right smartphone. So this might be worth waiting for.