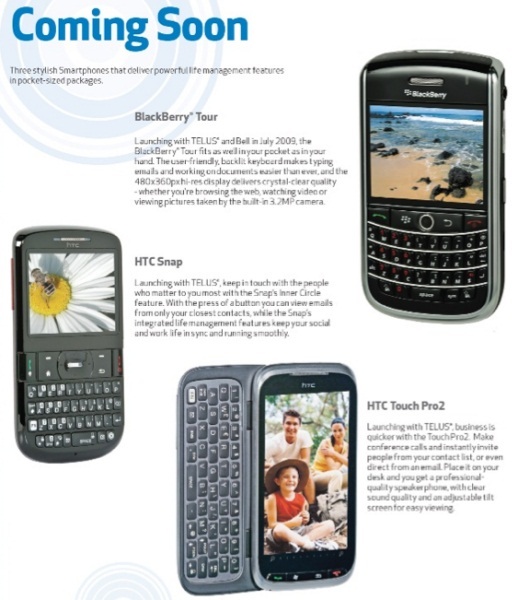 Over the past few weeks there’s been minimal information written about TELUS, apart from several entry level device launches they have been relatively quiet.

TELUS Customers (and potential customers) are eagerly awaiting the upcoming July 15th launch of the heavily leaked BlackBerry Tour 9630. In addition, there has been information in the past that the HTC Snap and HTC Touch Pro 2 will make it’s way over to Telus also. The rumoured price points are the Snap will be $449.99 and the Touch Pro2 to be $549.99 outright. No word was given about official launch dates though.

This brings us to Best Buy Mobile. They’ve graciously showed us a “Coming Soon” line-up for TELUS that proudly displays the HTC Snap and HTC Touch Pro 2 in all its glory. Still no official word on a launch dates… but other details within the flyer are good until July 30th, 2009. So there’s a good chance we’ll see both these devices within the month!