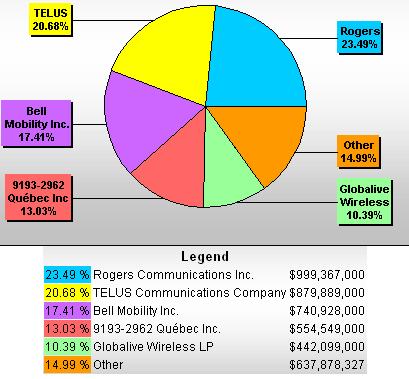 After eight weeks and 331 rounds, 292 licences sold, the Canadian Wireless Spectrum Auction grossed the government $4,254,710,327. Globalive Communications Inc. 30 licences could be the one to emerge as the new national cellphone carrier.

The auction was set up to encourage more competition in the wireless market from Rogers,  Bell and Telus. Back in May, Honourable Jim Prentice, Minister of Industry, said “Our government’s intentions are clear: to achieve lower prices, better service and more choice for consumers and business. We believe in relying on market forces to the maximum extent feasible because competition benefits consumers, and consumers benefit most when markets are as competitive as they can be.”

What is next? All licence winners have 30 days to pony up the money and deliver it to Industry Canada where the government will spend some time to make sure winners abide by Canadian laws. Here is a list of the major breakdowns of dollars and licences:

Quote from Rogers:
Rob Bruce, President, Rogers Wireless said “The 20 MHz of Advanced Wireless Services (AWS) spectrum gained through the auction supports Rogers’ continued growth strategy, and is a responsible investment particularly in the future diverse and growing opportunities to be found in broadband wireless data services. This additional spectrum provides us with the flexibility to ensure we continue our history of launching the most innovative products and services that Canadians want today, and in the future.”

Quote from Telus:
Janet Yale, TELUS executive vice-president of Corporate Affairs said “This is a once-in-a-lifetime opportunity to make Canada the most connected nation in the world and advance the government’s own agenda of making ours an even more competitive economy. More than $4 billion has been raised in the auction and it only makes sense that Canadians and consumers should see a corresponding expansion to the broadband infrastructure and services they already enjoy. Indeed, there is an obligation to re-invest a
portion of the windfall revenues to build upon the billions of dollars Canadian telecom carriers have invested to allow more Canadians in rural, remote and First Nations communities to access high speed Internet services. An investment of $1 billion in such a national project will be an investment in Canada’s future, fostering innovation by businesses operating in rural areas while enhancing the lifestyles enjoyed by Canadians who are able to connect to the information economy for the first time. Let’s work together to write the next chapter.”

Quote from Eastlink (Bragg Communications):
Lee Bragg, co-CEO EastLink said “EastLink’s goal throughout the auction was to secure spectrum so we can serve our customers and launch a competitive mobile phone service. We were successful. It is an exciting time as we prepare to enter a new line of business that enables us to be a full-service provider for both residential and business customers. We will finalize our plans on when the service will be available over the next couple months and hope to be in market within the next year. EastLink will be looking to launch next generation services that will allow customers to integrate their mobile phone with their home entertainment services. This will ensure our customers have access to the best and most advanced technology options available.”

Quote from Globalive:
Anthony Lacavera, Chairman and Chief Executive Officer of Globalive Communications Corp. said: “This is an historic event for wireless users across the country. It marks a new era of choice in Canada’s wireless world. At Globalive, we have earned a track record of innovation; that’s exactly what Canadians can expect from us when we announce our wireless offerings.”

Quote from Manitoba Telecom Services Inc. (MTS Allstream):
MTS strengthened the Company’s existing wireless business by acquiring 35 MHz of wireless spectrum covering 1.2 million people in Manitoba at a total cost of approximately $41 million. Pierre Blouin, Chief Executive Officer, MTS Allstream, said, “We are pleased that we were able to strengthen our position in Manitoba through the purchase of additional spectrum. This provides us with the flexibility and capacity to manage future demand for next generation wireless services, including bandwidth intensive data applications.”