How the Persona series changed my outlook on life

Persona 5 Royal finally has a multi-platform release, allowing others to play a life-changing experience 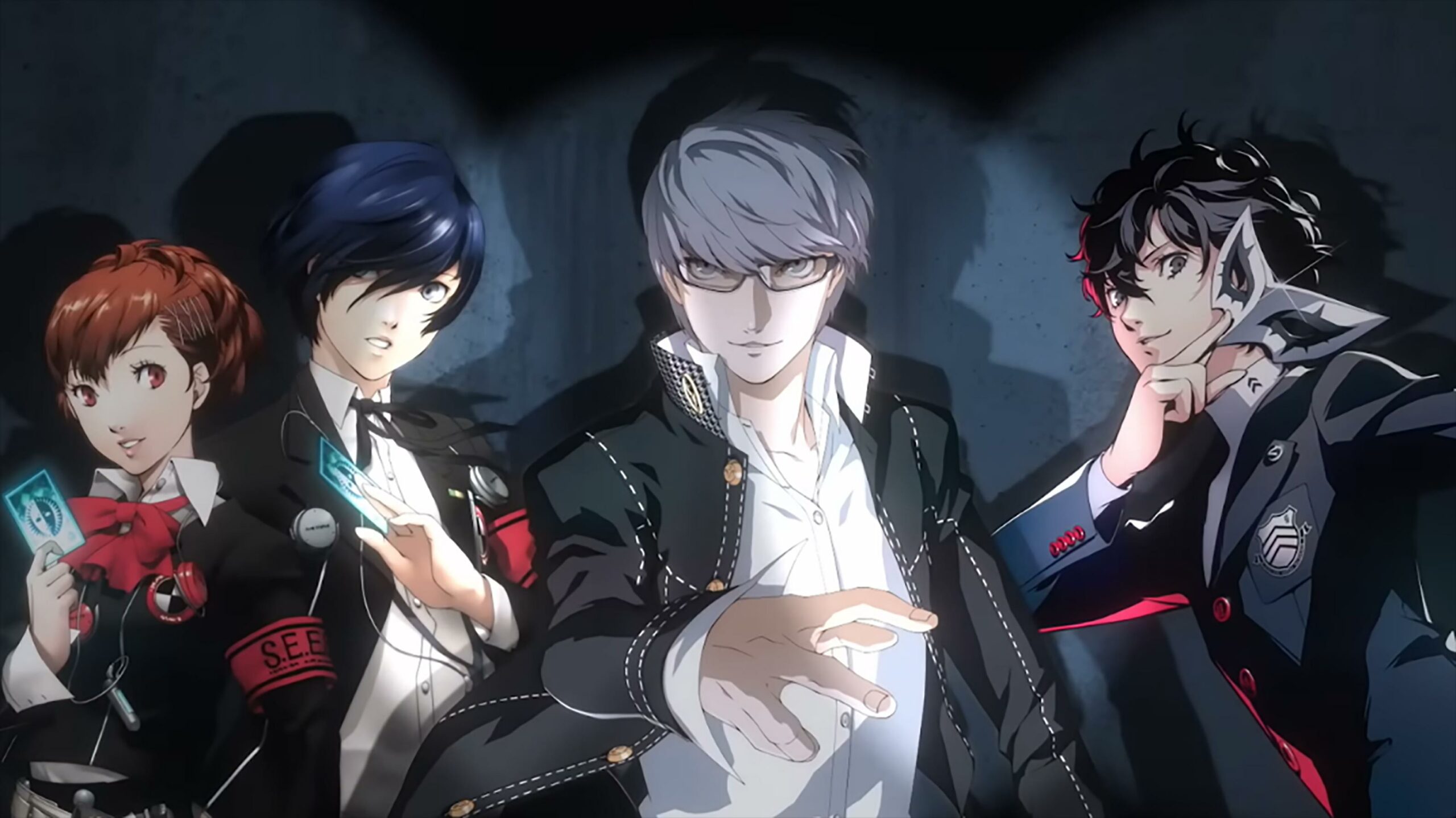 Developed by Atlus, the Persona series is one-half high school simulator, the other half dungeon-crawling role-playing game (RPG). In all of these games, you primarily control a recently enrolled high school student who must also get to know the surrounding area that you’ll be spending your time in.

During the high school segments, you interact with other classmates, listen to lectures and even engage in mid-term exams to test your knowledge. These often play out similarly to a visual novel, as the Persona games often don’t have cinematic cutscenes except for select story beats. 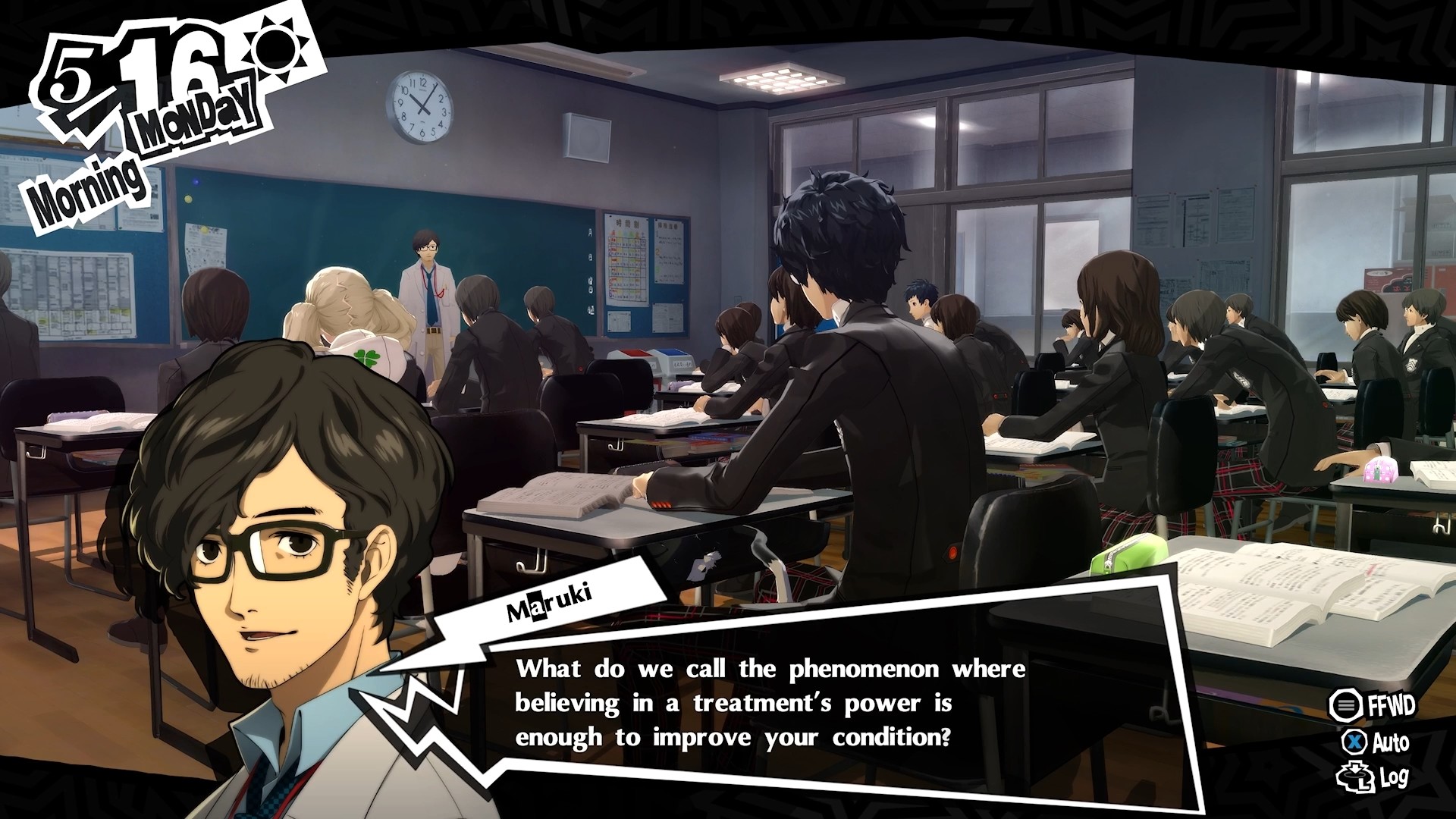 School counsellor Maruki is one of the new characters introduced in Persona 5 Royal.

During the RPG aspects of a Persona game, you control a party and navigate through a labyrinth-like area (typical for a dungeon crawling game) until you reach your objective. The gameplay is also quite standard for an RPG as it revolves around a turn-based system. However, while I never played any of the Persona games until 2017, I did experience the fantastic music through another Atlus game, Catherine, which I adore because it flips the narrative on how to approach a puzzle game.

Since music often entices me to try other forms of media I wouldn’t typically consume, I was happy to give Persona 5 a chance.

Wake Up, Get Up, Get Out There

After sinking over 80 hours into the game, I was enamoured with the entire experience.

I was so interested in the Persona series as a whole that I went back and played Persona 4, Persona 3 FES and even the spin-off games (infamously spending 50-plus hours in Persona 4: Dancing All Night). Since my current spare time is more limited compared to my student days, I now set personal yearly video game goals. One is to play a Final Fantasy title per year. The other is to play a Persona game. I am that engrossed.

When I play story-driven games such as Nier: Automata or Final Fantasy VII, I often look at them either through a philosophical lens or just how compelling the characters are through their own personal hardships. However, unlike some other narrative-focused games, the Persona games have genuinely shaped my outlook on life as I constantly find who I really am. 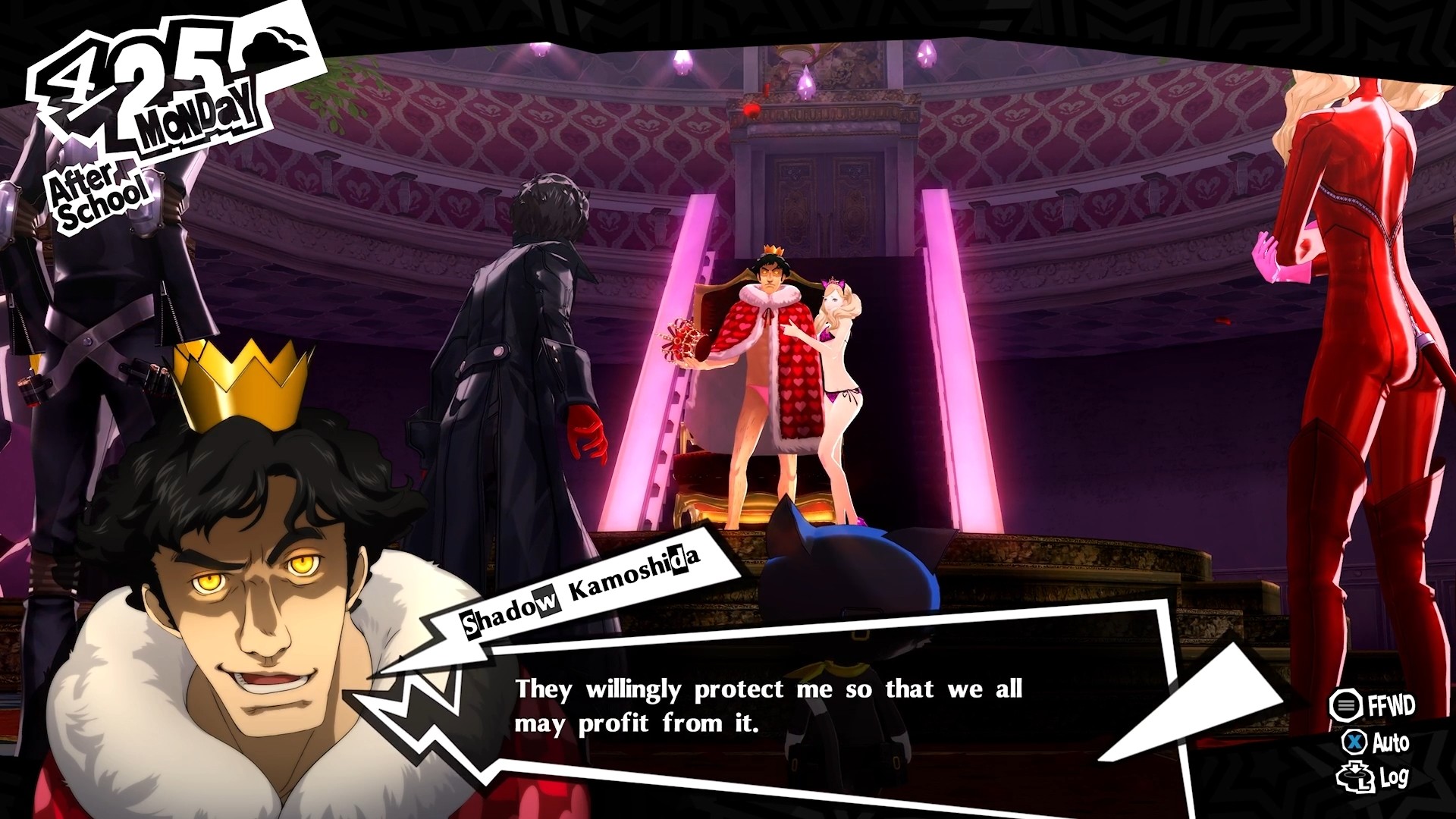 In Persona 5, Kamoshida is a coach at your school and one of the many morally bankrupt people you’ll encounter.

As you’ll find out if you play these games, underneath the high-school anime setting is a message about many personal struggles that a human being faces. For example, Persona 5’s core theme is rebelling against societal norms and bringing justice to those abusing their power. While this also currently applies to our own society, there’s a deeper, more personal message that I took away by the end of the game: having faith in yourself while pursuing your own creative goals.

Often, we seem to push away our creative side to conform to a hierarchy tied to your personal life. During my third year as a journalism student, I was constantly afraid of life after university, especially when there are so many financial insecurities in a creative space. My “hierarchy” was society’s financial burden, an issue only further highlighted as the years have gone by.

While this might sound absurd to learn from a video game, Persona 5 taught me to battle through those insecurities, even if it presents a great challenge. That lesson helped me truly enjoy my fourth year in university both socially and academically, especially at a time where I was coming out of a long-term relationship and it was my first year of essentially being alone.

On top of the overall story reflecting this message, this also resonates with one of your party member’s arcs as she experiences doubt in her athletic abilities and severe depression about a past traumatic event. Seeing this person overcome that major challenge was not only heartwarming, but genuinely inspiring.

Another experience that really stuck with me was from Persona 3. This game does not shy away from the discussion of death, a topic that I personally find both intriguing and terrifying.

While I won’t spoil Persona 3, there is a specific interaction with a dying man that left a lasting impression on me and changed my view on death. This specific side story teaches you not to let the fear of dying stop your own personal goals or else it will prevent you from living a fulfilling life.

This is what I love about the Persona series. Whether it’s rebelling against a corrupt society, embracing your true personality or dealing with the concept of death and loss, Persona has always dealt with topics that question your approach to life. 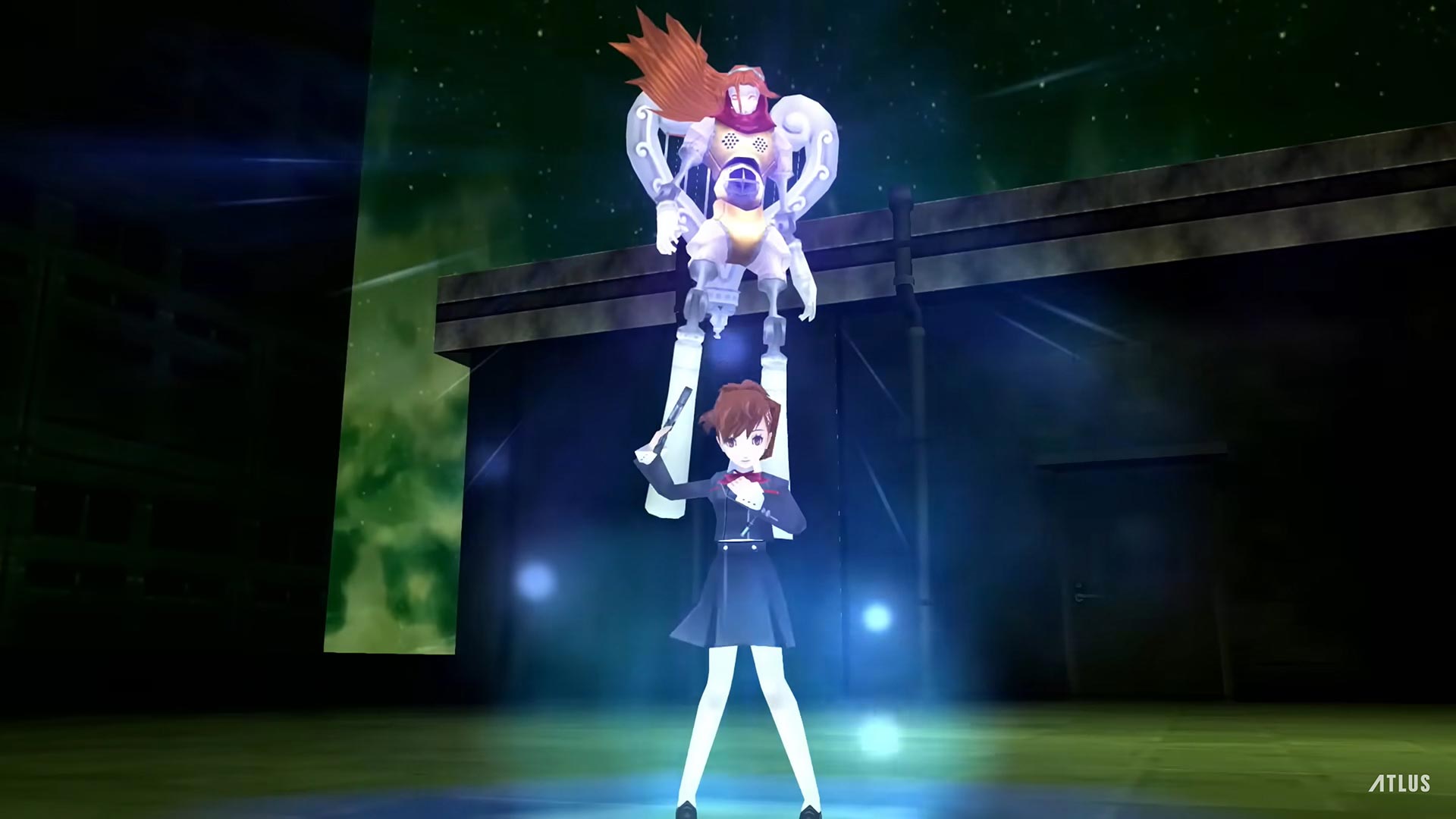 The female version of the Persona 3 protagonist summoning a Persona.

These themes are also integrated into the gameplay mechanics. The word “Persona” isn’t just a name; in this series, it means a “shadow of your true self.” From a gameplay standpoint, it’s a mechanic for battling enemies that lets you summon everything from the Norse god Thor to a phallic creature on wheels.

From a narrative perspective, though, gaining a Persona reflects how your party members learn to overcome challenges and grief. It doesn’t mean that they quickly overcome their hardship; rather, it’s a slow, methodical way that you gradually experience as you hang out with them.

What I find fascinating about this series is how party members are treated during your playthrough. In other games, party members can often be seen as a means to progress the story. In Persona, though, the NPCs you interact with feel three-dimensional and honestly become your own friends. When you’re not battling monsters in the dungeons, you feel like you’re hanging out with an actual person, even if it’s a small intimate moment like going to the gym or simply sitting by the local park. For example, during training sessions with your friend Ryuji Sakamoto, you come to learn about his troubled upbringing and his goal to help the previously-abused school track team, even though he was ousted for standing up to the previous coach.

At the same time, your own actions guide who you choose to interact with. For example, in Persona 5 Royal, you have a few options to hang out with friends after school. You can’t hang out with everyone, so you have to choose whether to eat ramen with Ryuji or help Yusuke with his painting. 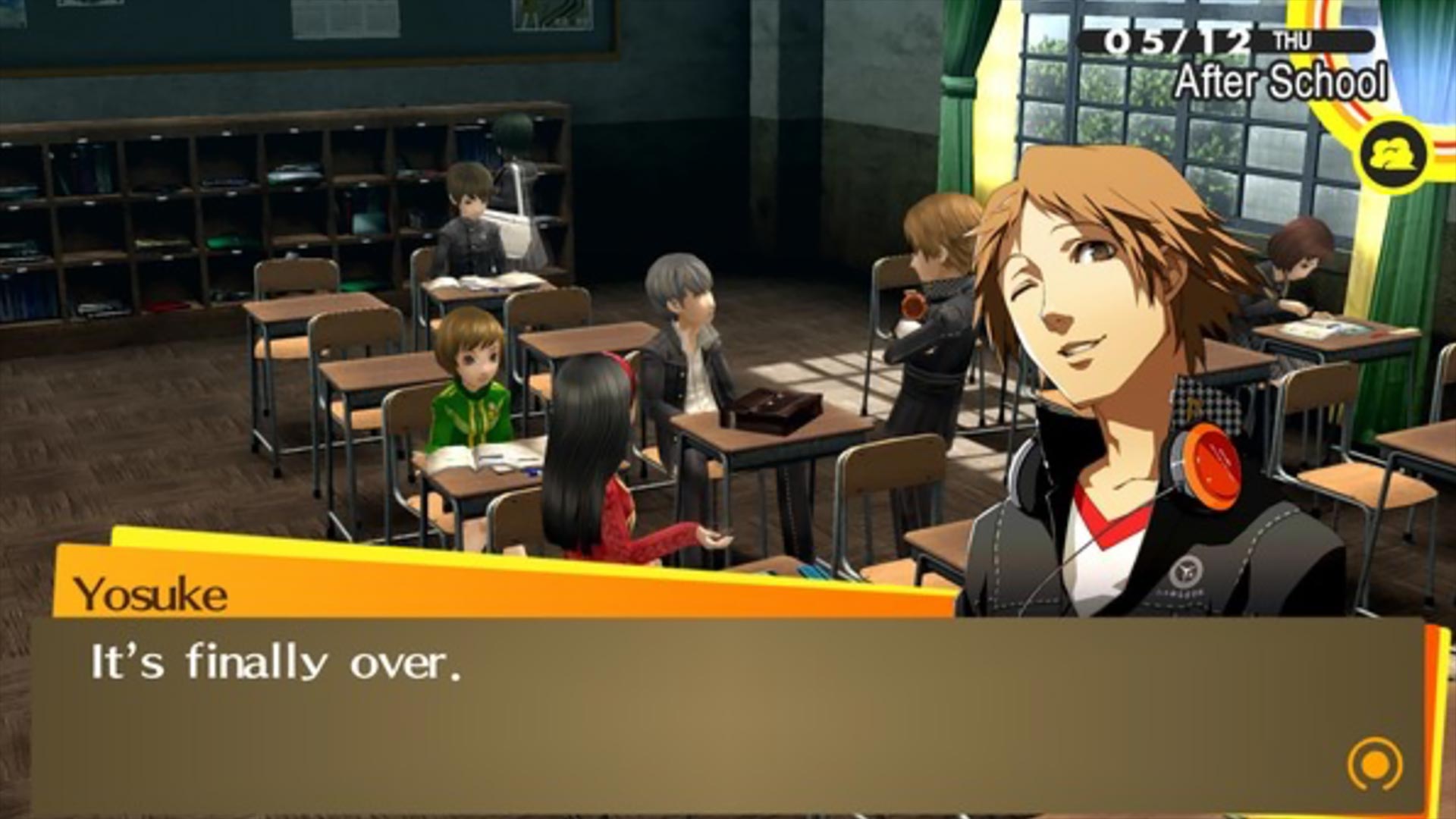 Yosuke is the first friend you make in Persona 4.

It’s a valid complaint that the Persona games are too long, as you’re spending 70-100 hours depending on your pace. However, when you eventually have to say goodbye to your friends and the credits start rolling, it’s impossible not to cry when you’ve devoted so much time getting to know them. It also makes playing the spin-off titles (which have no right to be that good) a joy to go through, as they serve as reunions with your pals.

Not to say that the music doesn’t also add to your emotions. The ending songs, especially “Never More,” are iconic because they beautifully encapsulate your feelings by the end of your playthrough. This song now feels tied to me personally because I now attribute “Never More” to one of my best friends leaving Canada to become a school teacher in Japan.

Obviously, most people in the West wouldn’t understand the Japanese lyrics (unless you translate or speak the language), but composer Shoji Meguro knows how to capture your emotions through music. His soundtracks are simply brilliant and show his range by using genres such as rock, pop and jazz. These songs have even led to fan-created remixes by combining Persona 4 music with popular artists such as Bruno Mars.

Pursuing My True Self 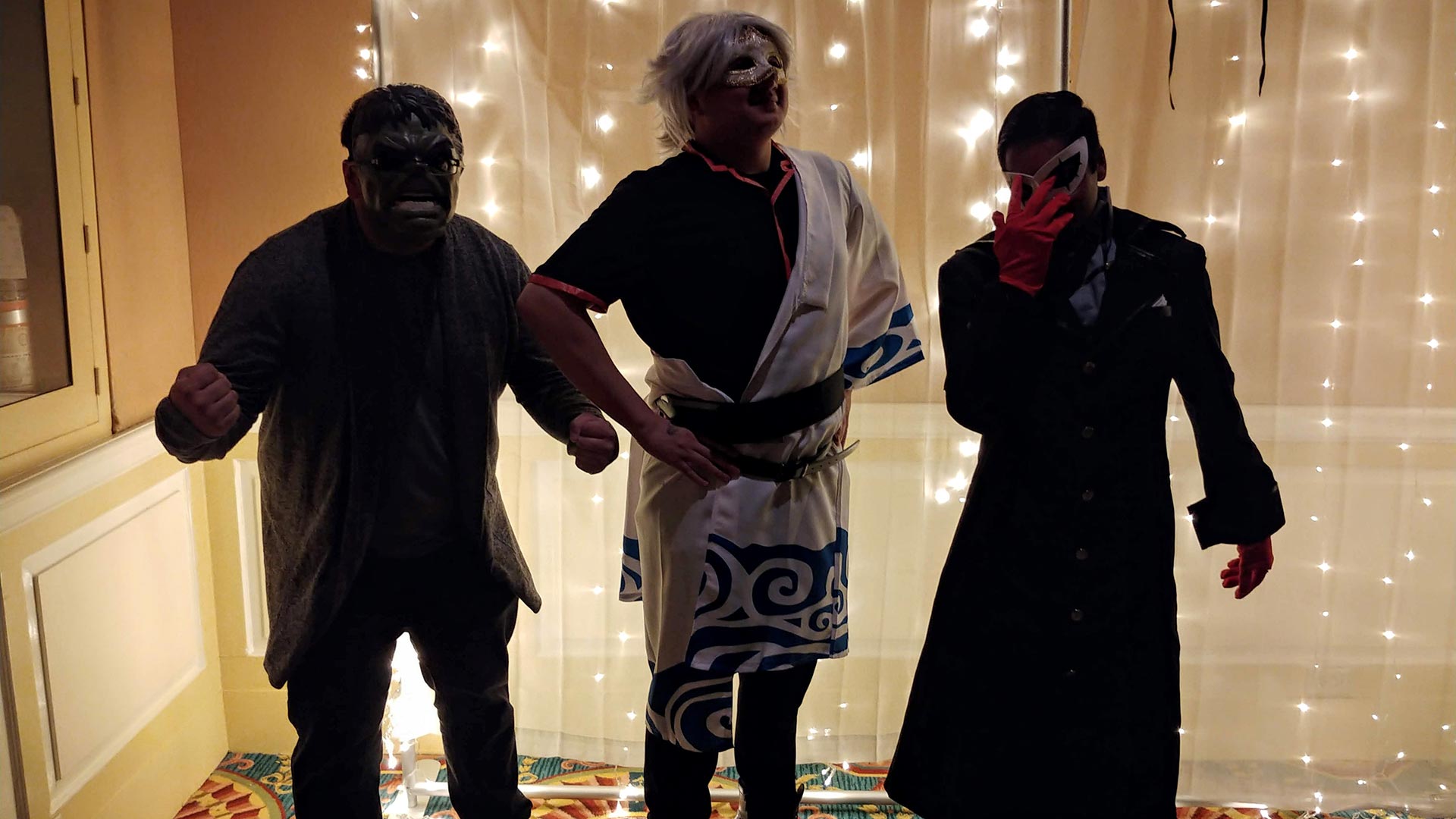 From left to right: Brad (Smart Hulk from Avengers: Endgame), Richard (Gintoki from Gin Tama) and me (Persona 5’s Joker).

I can’t tell you enough how Persona has impacted my own life, but my hope is that this helps you to play these games.

Since November 2017, I’ve met my best friends Richard and Brad Shankar (MobileSyrup’s gaming editor), delved into budget cosplays and spent lots of money on Persona merchandise. While I touched on the overall themes and how it’s helping to find myself, there are so many lessons that Persona could teach you that vary from my own.

However, the Persona series was previously PlayStation exclusive, making some of the games quite inaccessible because. Thankfully, all of the mainline games (barring the original Persona and its sequel) will be available on Xbox One, Xbox Series X/S, PlayStation 4/5, the Nintendo Switch and PC. Persona 5 Royal, the definitive version of the original Persona 5, is out now, with the other games releasing a few months after.

If you don’t know where to begin, I think Persona 5 Royal is a perfect starting point in terms of both gameplay and narrative, especially with the addition of the third semester. It not only introduces a great villain (an aspect that the series has admittedly lacked) but also enhances your party members’ stories.

For now, the series is rightly celebrating its 25th anniversary, which is no small achievement. I can safely say that the Persona series has changed my life, and I’m not afraid to admit that.

My only hope is that we don’t have to beg Atlus too much for news on the next mainline game.