Samsung Galaxy S22 Ultra Hands-on: The Note is back

A fusion between S21 Ultra and the Note 20 Ultra 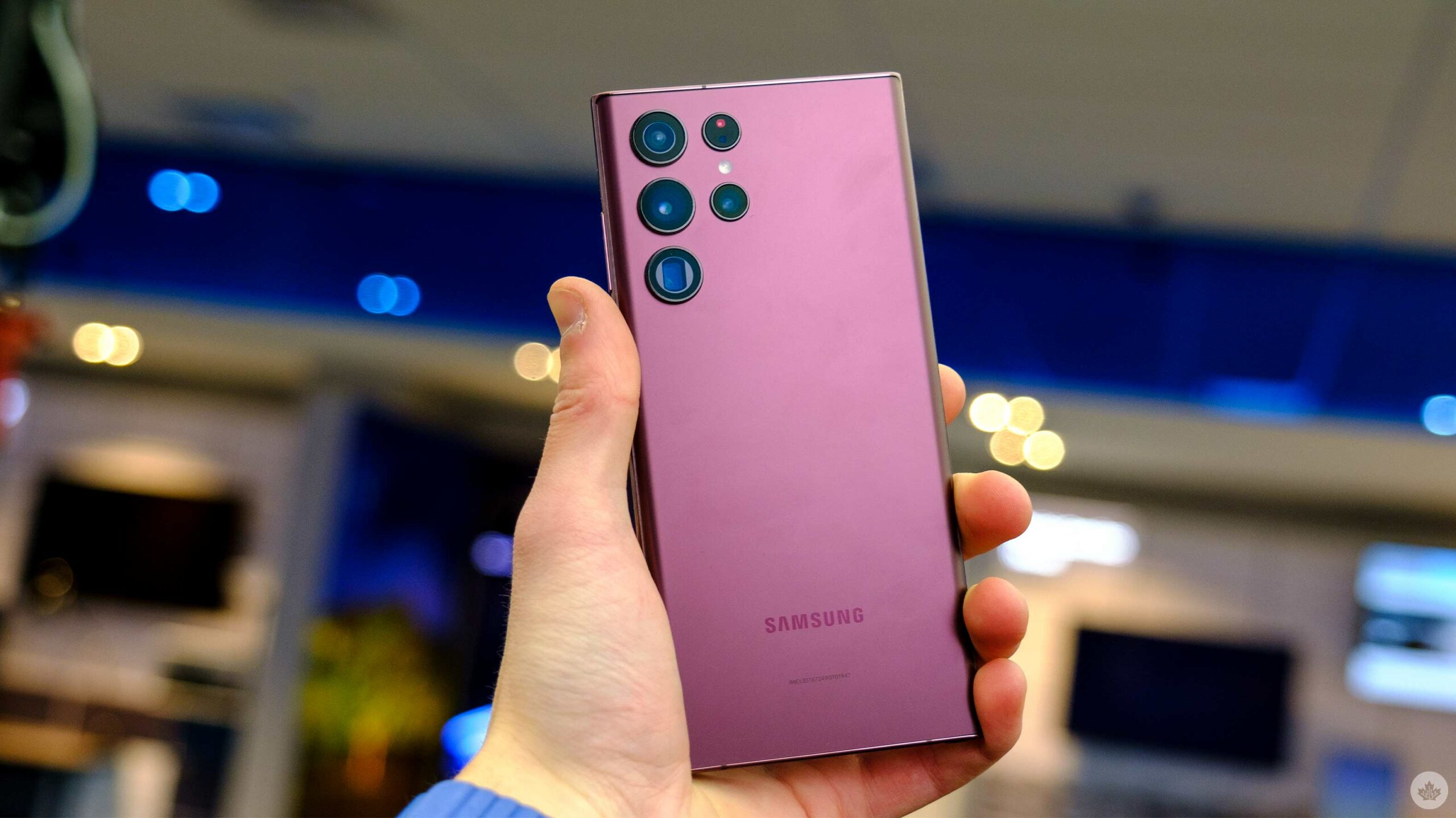 Samsung officially unveiled the Galaxy S22 series and Galaxy Tab S8 series at its first Unpacked event of 2022. This year, the South Korean company showed off three smartphones and three tablets, and I got the opportunity to go hands-on with all six of these devices.

However, I spent most of the time focusing on the headliner of the event, the new Galaxy Note S22 Ultra.

This year’s ‘Ultra’ Samsung S series phone takes a different form factor than the other two smartphones in the lineup. In fact, it looks a lot like the Note 20 Ultra from two years ago. Alongside a notable design, the S22 Ultra offers top-of-line specs, new camera features, an included S-Pen and a considerably more expensive price tag.

I only spent an hour with the device, so these are just my initial impressions. I’ll have more on the Galaxy S22 Ultra in the coming weeks, including a detailed review of the smartphone.

The Samsung Galaxy S22 and S22+ feel and look very different than the S22 Ultra. From a distance, they look similar to the Galaxy S21 series and, in the hand, both phones feel more like iPhones with squared-off edges. They do come in pretty cool colours including a Pink/Gold hue and a really nice Green shade.

That said, while its size felt significant at first, by the end of my hour with the device, I didn’t mind its obvious girth. I think this had to do with the curved edges that meld perfectly with the curvature of my hand. This is different from the more rigid style of the iPhone 13 Pro Max and more like the Pixel 6 Pro, another device I enjoy holding despite its large size. 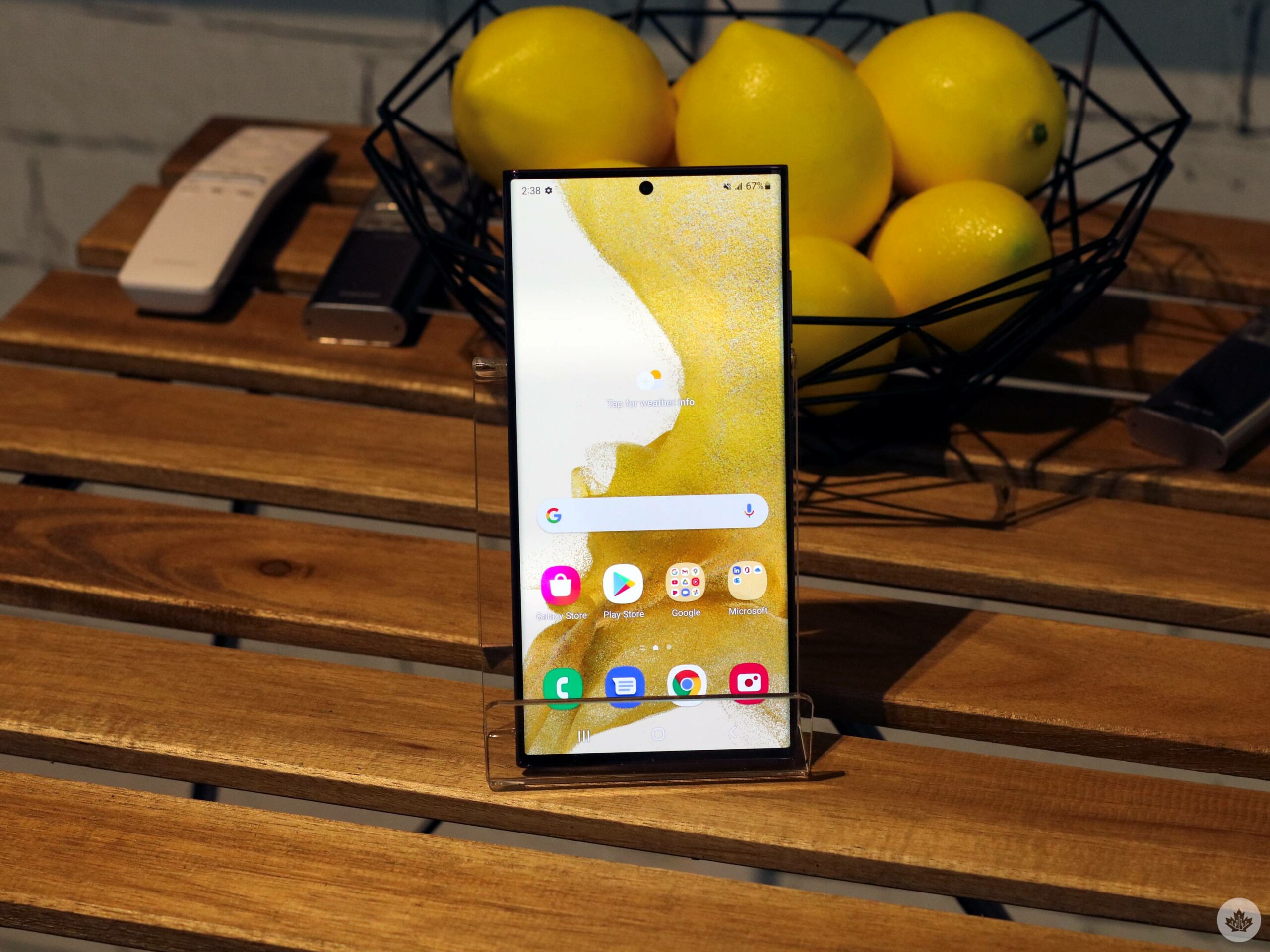 The S22 Ultra is lighter than the iPhone 13 Pro Max by 11-grams, which at the moment is my daily driver and I never find it overly heavy.

I didn’t think I would be a fan of the phone’s rectangular-shaped design, even though it does help make the S22 Ultra unique – unless you’re used to seeing Galaxy Note every day. Comparing it to the Note 20 Ultra, the S22 Ultra looks practically the same from the front, but the ‘Infinity O’s’ hole-punch camera is slightly smaller — we’ve reached out to Samsung to confirm if there is a size difference between the camera housing.

Samsung says it created the S22 Ultra with durability in mind, which makes sense given how solid the smartphone feels. It sports a Gorilla Glass Victus+ glass front and back, and an aluminum frame. On the back, the device features a four-camera setup that’s not on a large camera bump like what we’ve grown accustomed to with most smartphones. The camera array is similar to the LG Velvet’s setup, ditching the traditional camera bump, but the sensors aren’t flush with the rear of the device so it’s more like a bunch of tiny camera bumps.

It’s worth noting this camera array gave MobileSyrup’s Brad Bennett trypophobia-like vibes, so the design might not be for everyone.

Additionally, the S22 Ultra comes in ‘Phantom Black,’ ‘White,’ ‘Burgundy, ‘Emerald’ and even more colours that are exclusively available from Samsung, including ‘Violet.’

The S22 Ultra comes with several pretty useful new features. Starting with the 6.8-inch 3080 x 1440-pixel resolution display, which now comes in a new panel that allows the variable refresh rate to go from 120Hz to 1Hz. This is different from what’s available on the S22+/S22 and previous S21 series devices that go from 120Hz to 10Hz. Reducing the refresh rate to 1Hz should allow the S22 Ultra to save a little more battery power when looking at a static page or image, but I need to spend more time with the device to see how much of a difference this makes.

The 240Hz reduces this to 4.15ms, which should make it seem like the handset reacts instantly to each touch. This feature isn’t available on most smartphones and is usually reserved for gaming phones. I didn’t get to try it out, unfortunately, but I look forward to testing it for my full review of the S22 Ultra. The only other phone I’ve used with this feature was the Asus ROG Phone II. 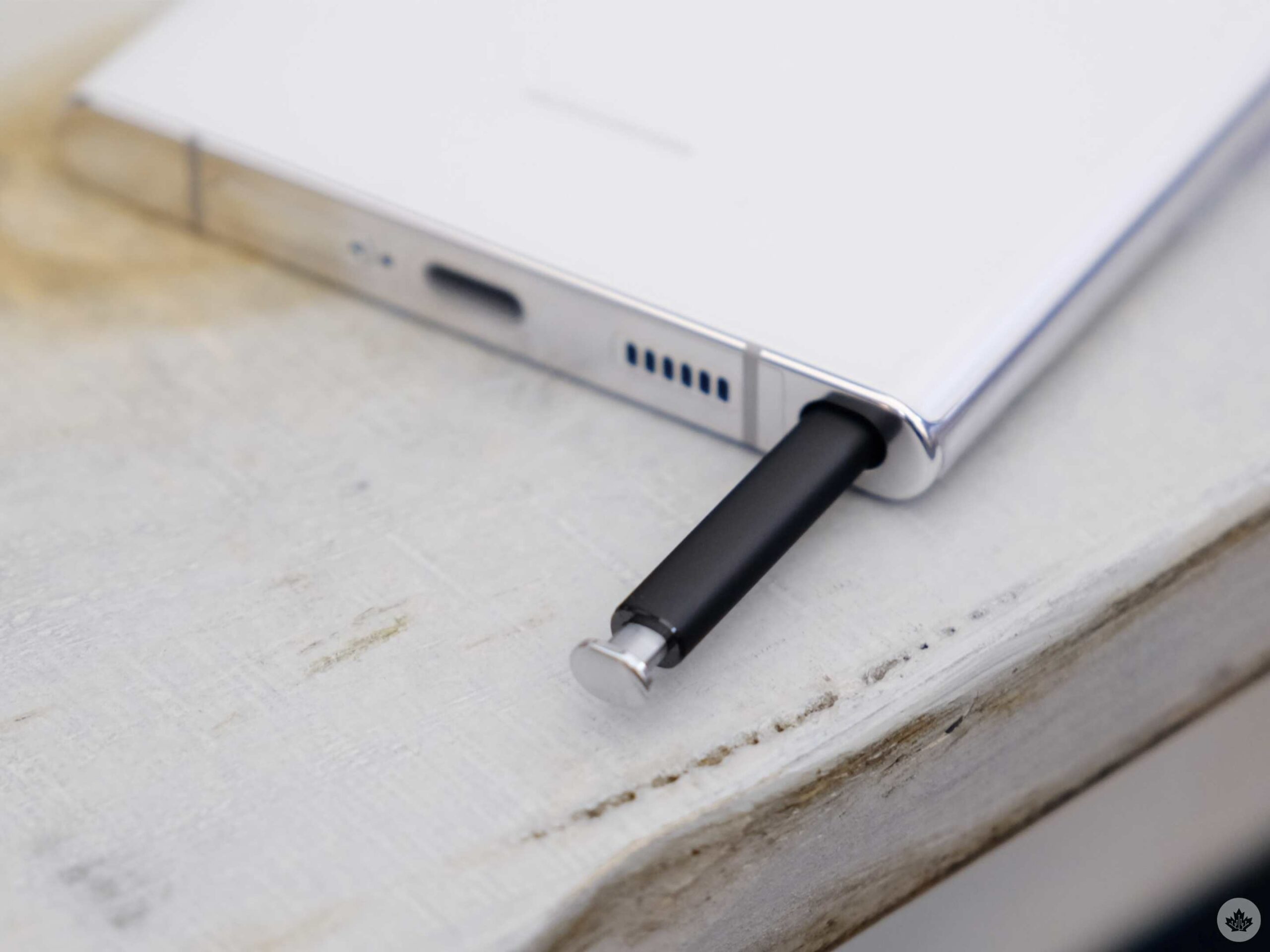 Alongside new display functionalities, the S22 Ultra also sports the beloved S Pen. While I don’t typically use the S Pen, I know it has big fans out there – especially now that the Note line is dead. Last year the S21 Ultra worked with the S Pen, but it was sold separately. This time the S Pen slides into the S22 Ultra just like it did with Note series smartphones.

Samsung says when writing notes and digitizing your scribbles into writing, the S Pen can understand up to 88 languages, 12 more than before. Additionally, the S Pen is more fluid with a latency of 2.8ms, which is faster than the 9ms latency available on the Note 20 Ultra’s S Pen. The S Pen isn’t included with either the S22 or S22+, only the Ultra.

I didn’t spend very much time with the S Pen, but I plan on using it more for my full review.

Putting through its paces

Samsung’s Galaxy S22 Ultra sports up to 12GB of RAM (down from last year’s S21 Ultra’s 16GB of RAM), up to 1TB of storage (up from last year’s S21 Ultra’s max storage of 512GB) and a Snapdragon 8 Gen 1 processor. Firstly, I think 12GB of RAM is enough for most people and you probably won’t notice the difference between 12GB and 16GB. It’s unfortunate though the base S22 Ultra starts at 8GB of RAM,  the lower RAM configuration probably won’t be noticeable for most, but I’ll probably notice it.

Further, the S22 Ultra won’t be the first smartphone with this processor to launch globally – the OnePlus 10 Pro beat it to the punch – but it will be the first to release in Canada. Qualcomm’s new processor focuses on AI, 5G and gaming, alongside better image processing. With this in mind, the S22 Ultra should be a beast when it comes to playing games, using AI and photography.

Alongside the 240Hz touch sensing, I can’t wait to play some games on this beast of a smartphone and will share my experience in my full review with titles like League of Legends Wild Rift, Pokémon Unite and more.

Samsung says that it has improved the S22 Ultra’s low-light videography and photography over last year’s S21 Ultra. The new camera array used bigger pixels combined with the company’s multi-frame exposure technology to allow the S22 Ultra to capture bright high-resolution images even in low light. Alongside this technology, the company’s AI reportedly processes 4x more data to sharpen details and reduce noise in low-light images. As you may have already guessed, I haven’t tested the S22 Ultra’s low-light photography capabilities or any of the camera’s other features like its advanced portrait mode or exporting 16-bit raw photos. That said, I’m looking forward to putting all four cameras through their paces to see what they can really deliver. 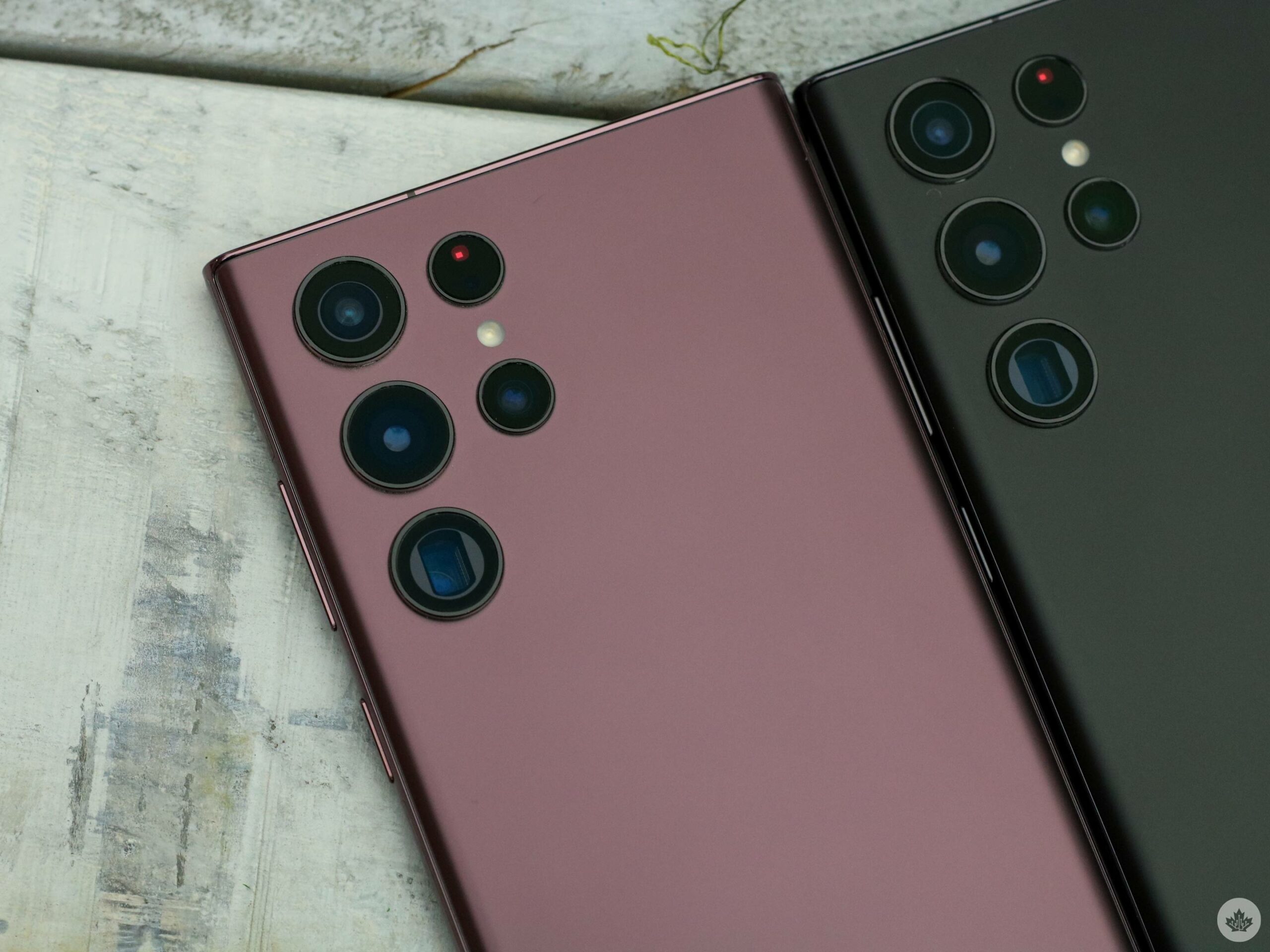 The phone also has a large 5,000mAh battery that can charge via 45W wired charging and 15W wireless charging. Even though the device has such a huge display, its variable refresh rate can dip as low as 1Hz and should help with power performance.

Additionally, the S22 Ultra sports an ultrasonic fingerprint reader, IP68 water and dust resistance and comes out of the box with Android 12 and One UI 4.1.

Alongside the S22, and S22+ the S22 Ultra releases on February 25th at carriers, retailers, Samsung Experience Stores and Samsung.com and is available for pre-order now. 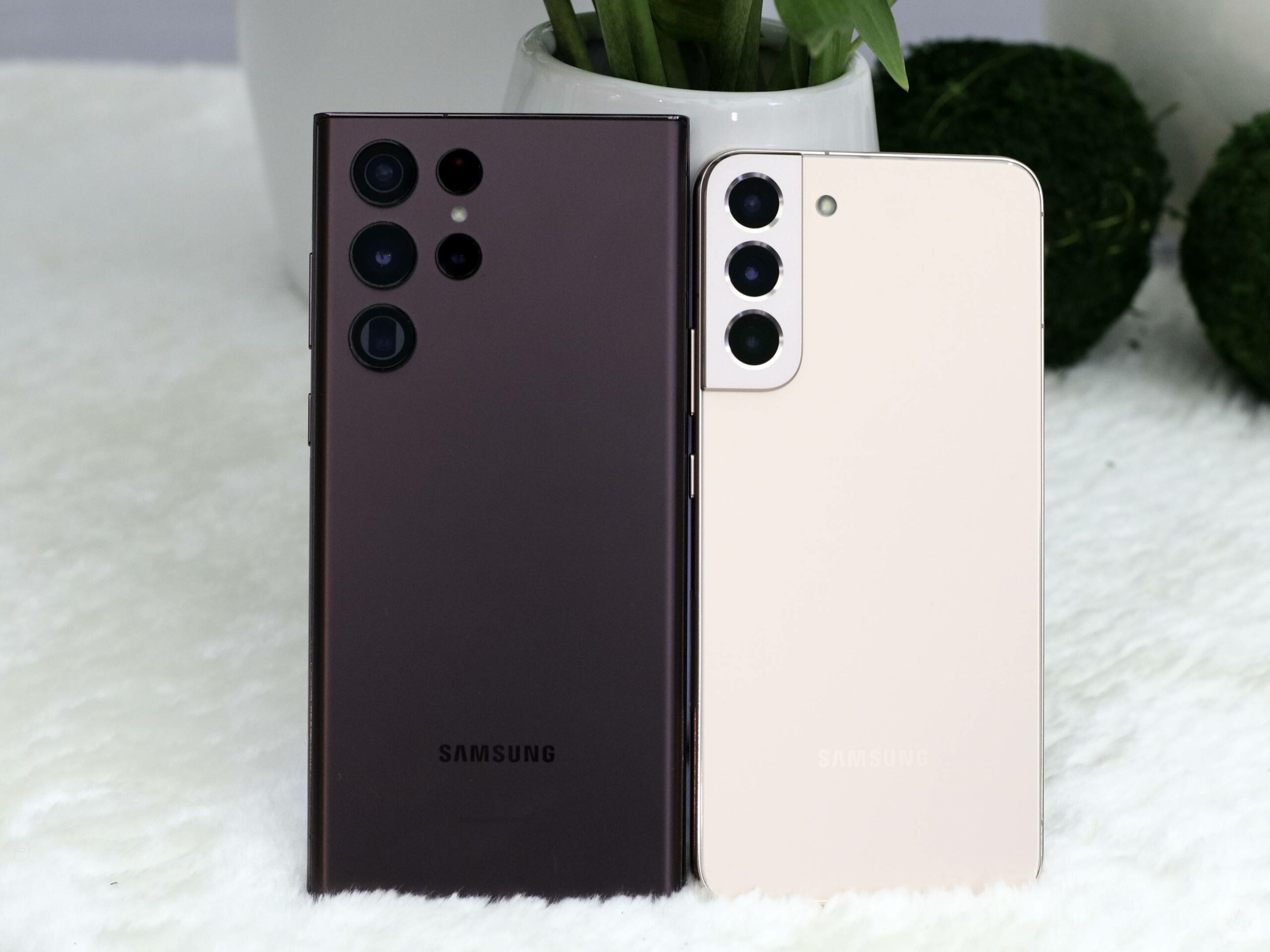 Either way, a $1,649 starting price is pretty hefty, and my upcoming review will let you know whether this phone is worth the mini fortune it costs.

The Samsung Galaxy S22 Ultra, along with the Galaxy S22 and S22+ are now available to pre-order in Canada here.