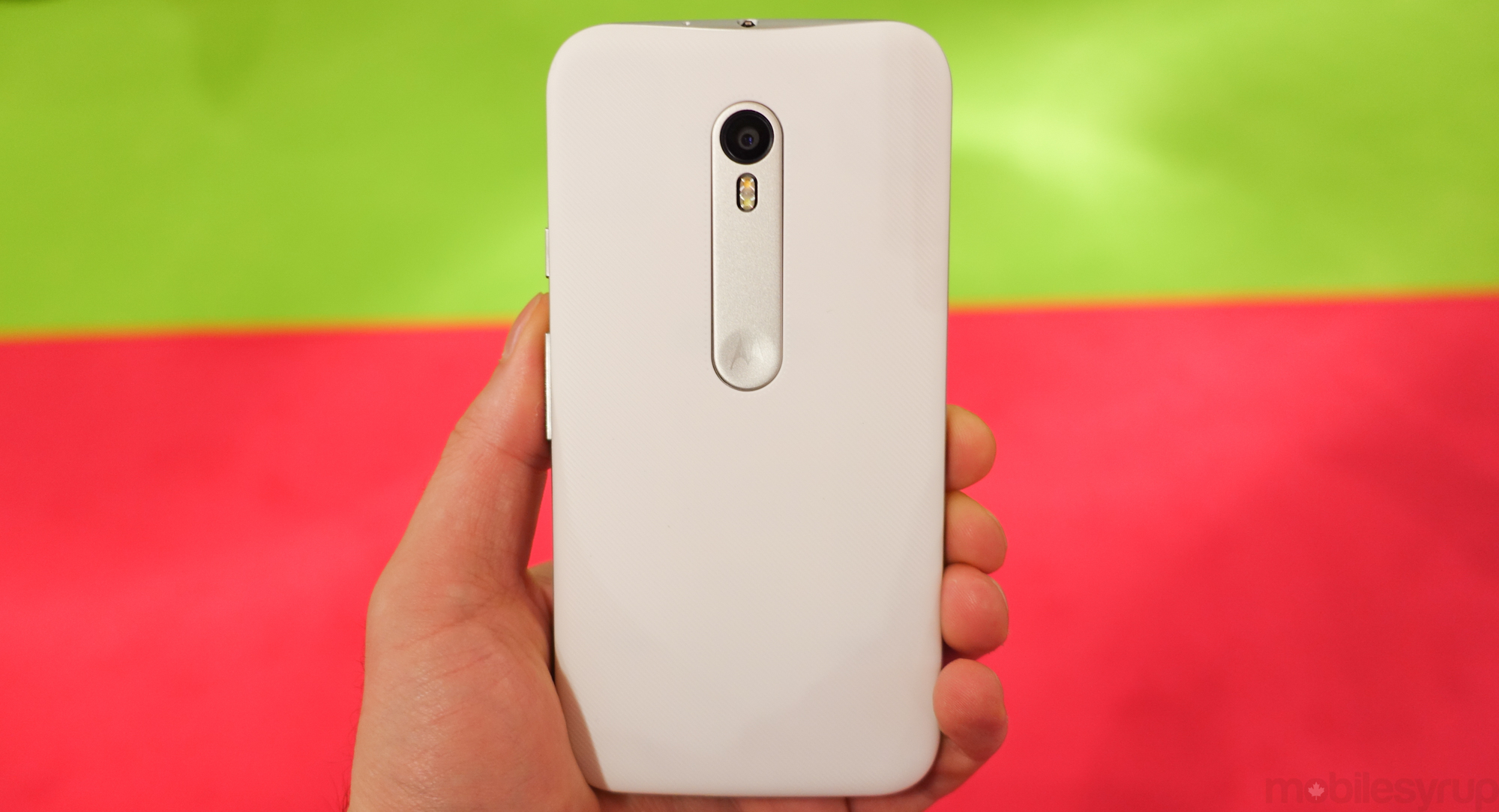 Along with two new Moto X models, Motorola unveiled a brand new Moto G this week. Motorola is not changing its formula too much here: camera and durability improvements are the name of the game, with some software features, such as Moto Display, trickling down to the popular $200 handset.

At first glance, the Moto G 2015 appears to be an amalgam of the Moto X Play, the Moto X 2013, and previous Moto G models. While it retains the replaceable back covers that have made it easy to accessorize, and put some high-margin revenue in Motorola’s pockets, this year’s Moto G gains IPX7 water ingress certification and a 13MP camera sensor borrowed from the Nexus 6. 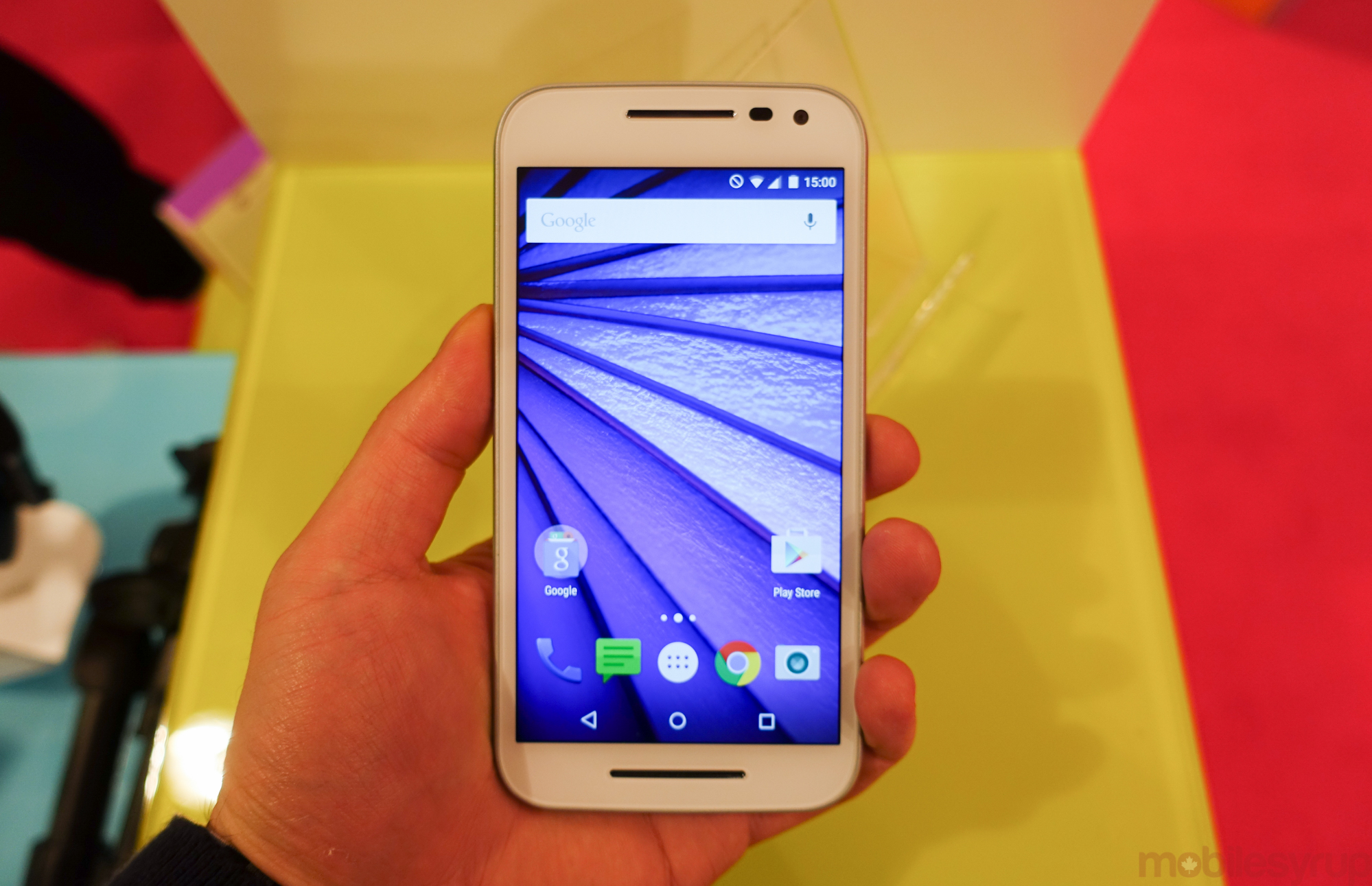 Still built with plastic, this year’s Moto G mimics the back designs of the Moto X Play and Style, inserting a short aluminum strip down the centre, where the camera and flash are housed. This continuity of form is significant for Motorola this year, as it spares the Moto G from being, as it has been in the past, a popular low-cost smartphone with design as an afterthought. Motorola is clearly positioning the new Moto G only slightly below the Moto X Play in terms of performance, and is treating it from a design perspective like a Moto X Mini. 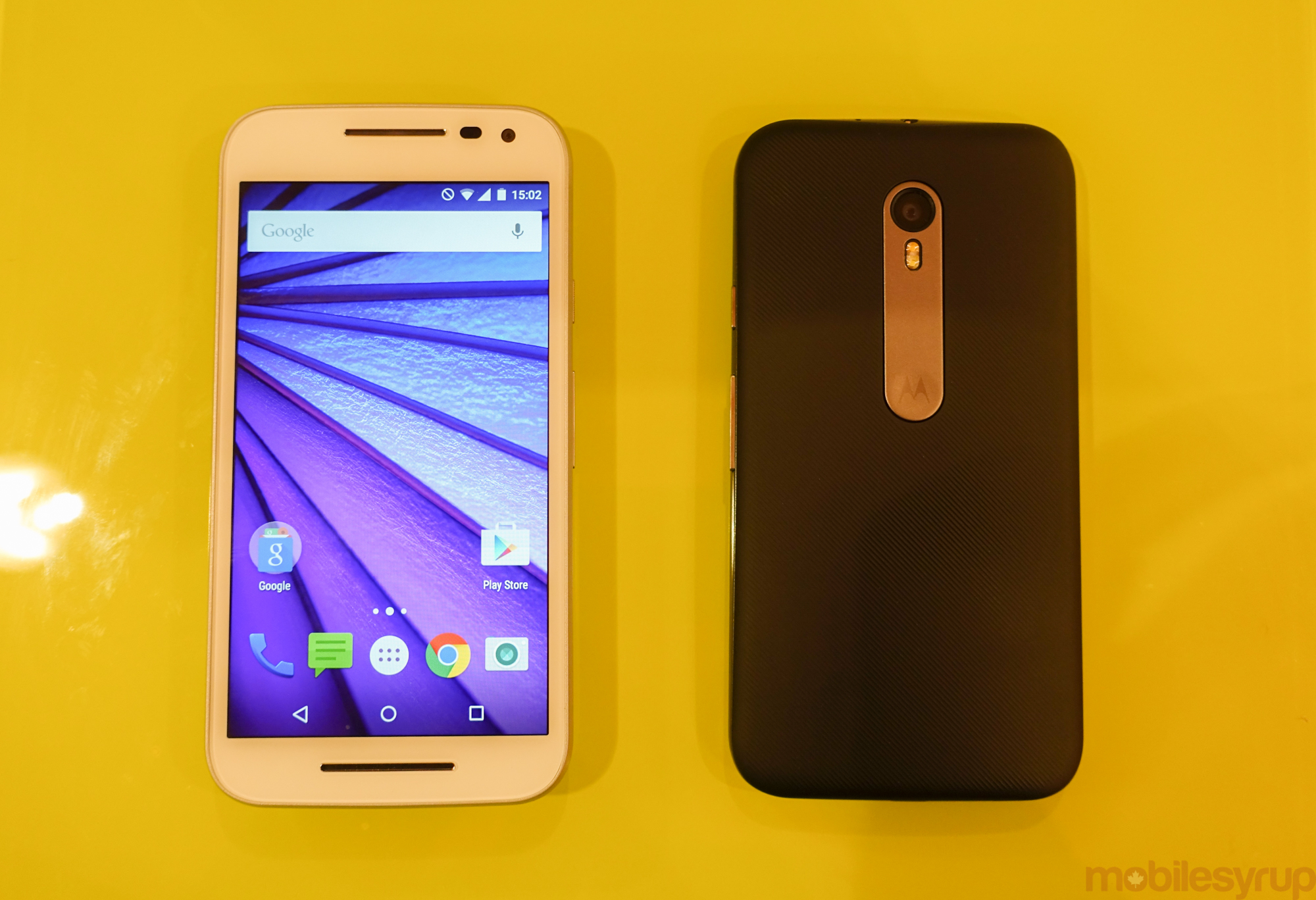 The screen, still a 720p LCD panel, is the phone’s weakest point. Colours are dull and viewing angles poor, but Motorola has wisely ported Moto Display, the ability to peek into notifications directly from the home screen, to this year’s Moto G. The relatively low-res screen also gives less work to the Snapdragon 410 SoC which, while capable, is not going to win any speed awards. Coupled with the 1GB of RAM and 8GB of internal memory (with under 4GB available to the user out of the box), many first and second Moto G owners are not going to see an immediate need to upgrade. 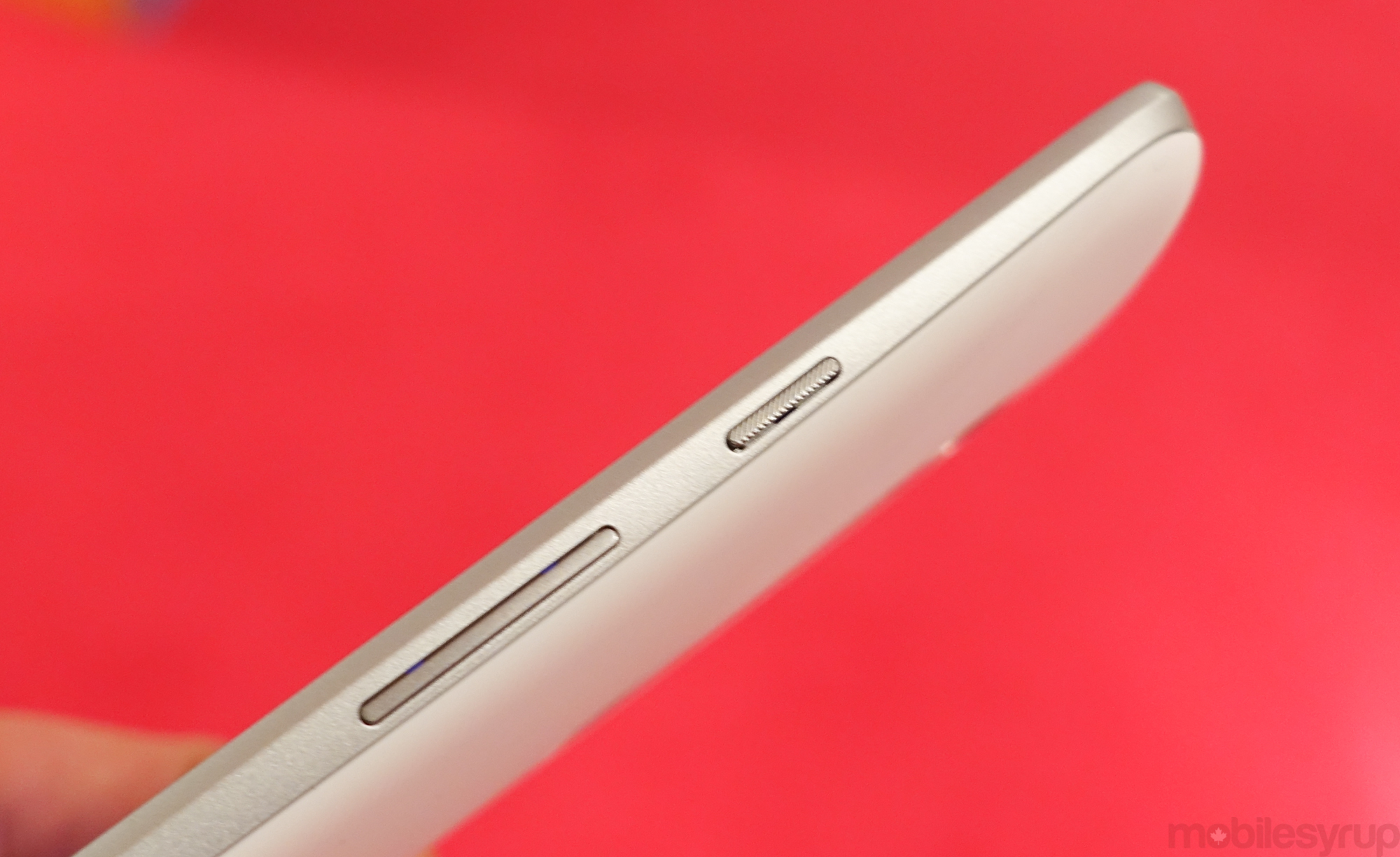 Indeed, this year’s Moto G is sort of like the refresh of a trusted Honda Civic, where the company focuses on changing only certain aspects of the car each year rather than retooling the entire interior. Motorola is keen to prove that the Moto G is friend to the photographer, so it boosted the camera quality significantly. The screen has never been an issue until now, but with other $200 phones nipping at the G’s heels, it would have been nice to at least see a boost in quality, if not resolution. Similarly, though this year’s Moto G is being offered, on Moto Maker, in a 2GB/16GB configuration, Canadian carriers chose to go with the cheaper, slower model.

Now that all Moto G models are LTE-capable, the company is now creating a single SKU, which will result in easier distribution around the world. Moto G is so popular in developing markets like India and Brazil that North American distribution, despite its popularity, comprises a small percentage of the total. Still, we only get to see things through the narrow lens of our own market, and the third Moto G certainly finds itself in a market where the difference between $200 phones, $300 phones and $800 phones is narrowing considerably — a market that the Moto G both created and has since helped proliferate. 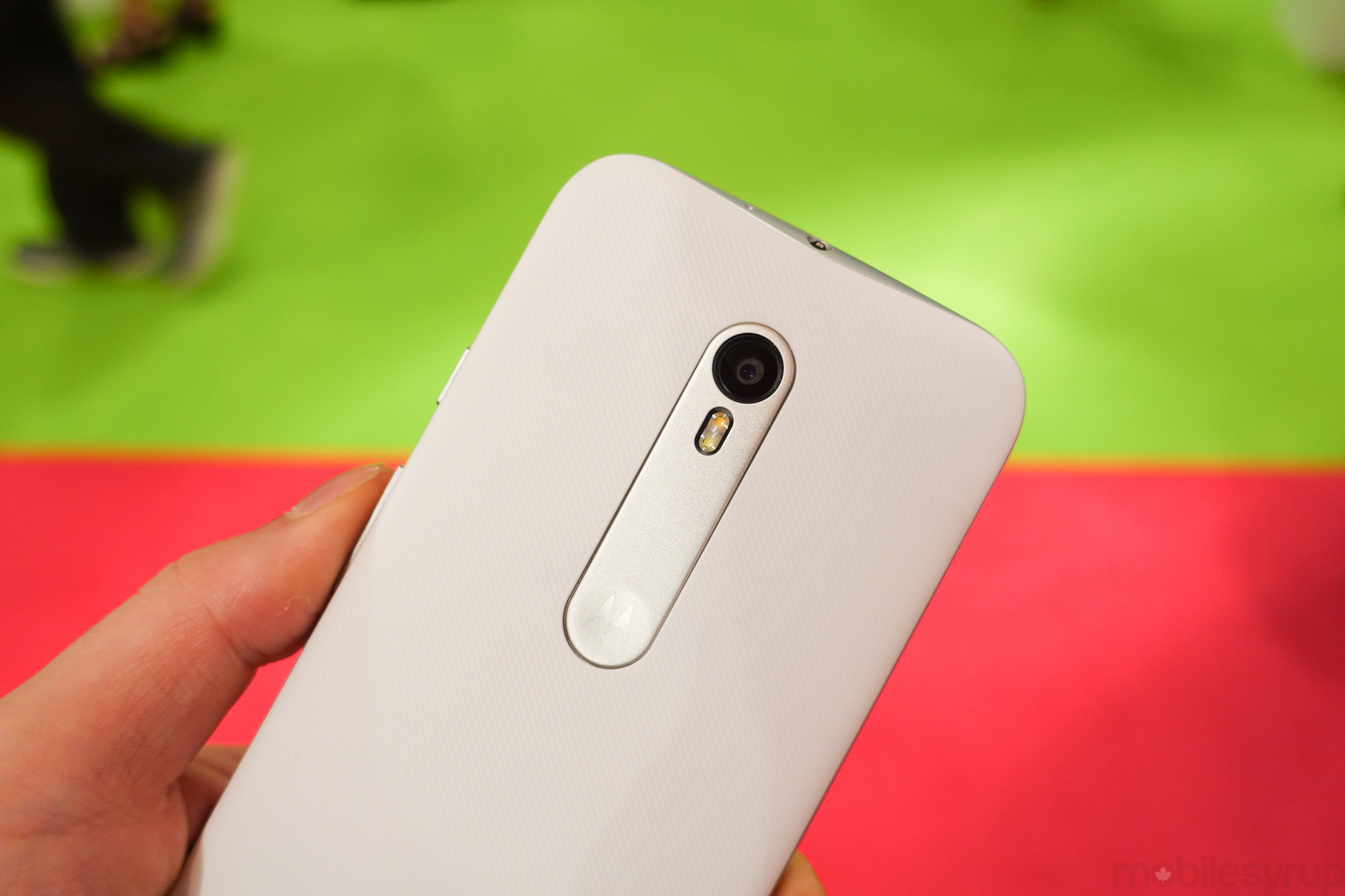 For Canada, the Moto G is a $0 phone on contract, from the day it is released until it is replaced. That number, $0, is still carriers’ manna and bread alike, the way to entice customers to spend lots on monthly contracts. That the Moto G is actually a good phone for $0 makes it an even better sell, since Motorola expends a lot of time and money keeping its devices updated and free of junk. Carriers like working with OEMs that actually care about their products, and Motorola is a kingmaker in this regard.

So now the Moto G has all the added software features of the more-expensive Moto X line, but still lacks the hardware oomph to really make a statement of its own. That’s where the Moto X Play comes in. Still, the Moto G is a capable if flawed device on its own, perfect for the millions of people who just want a smartphone that works well for most things most of the time. 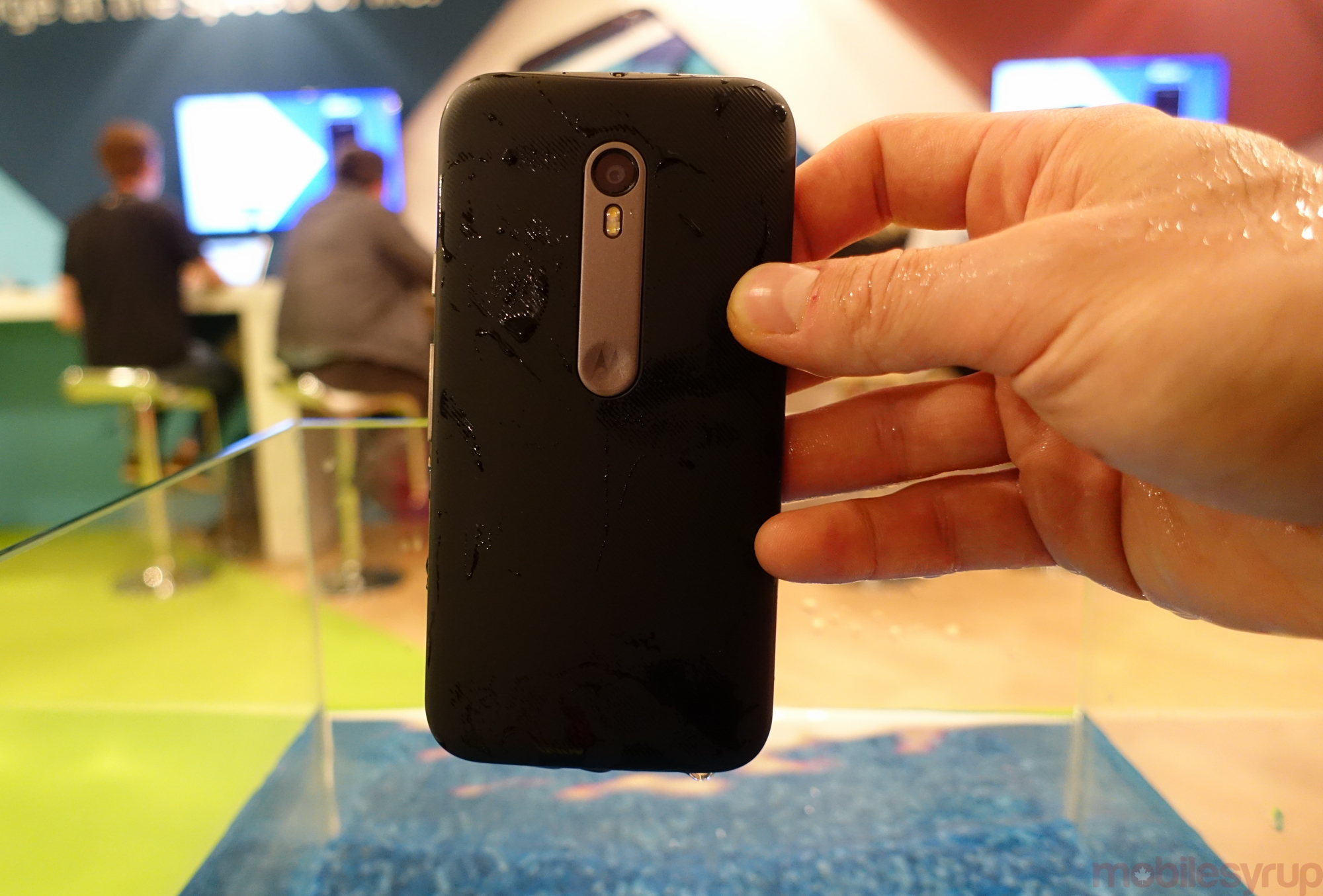 I have a Moto G in my possession right now, and it is awesome. Really. The removable backs are really lovely, and comfortable, and that I can use it in the rain (I’m travelling through the U.K., which is a perfect canvas on which to test the phone’s IPX7 water ingress protection) is a bonus. I often contemplate whether, as a power user, I could use something like the Moto G as my daily driver, and this year’s version, which hits the right notes in nearly every regard, could certainly fill that role.

A review is in the works, but until then, know this: the $200 phone is a product category that is only getting stronger, and it is still led by the Moto G, as boring as the phone may be. 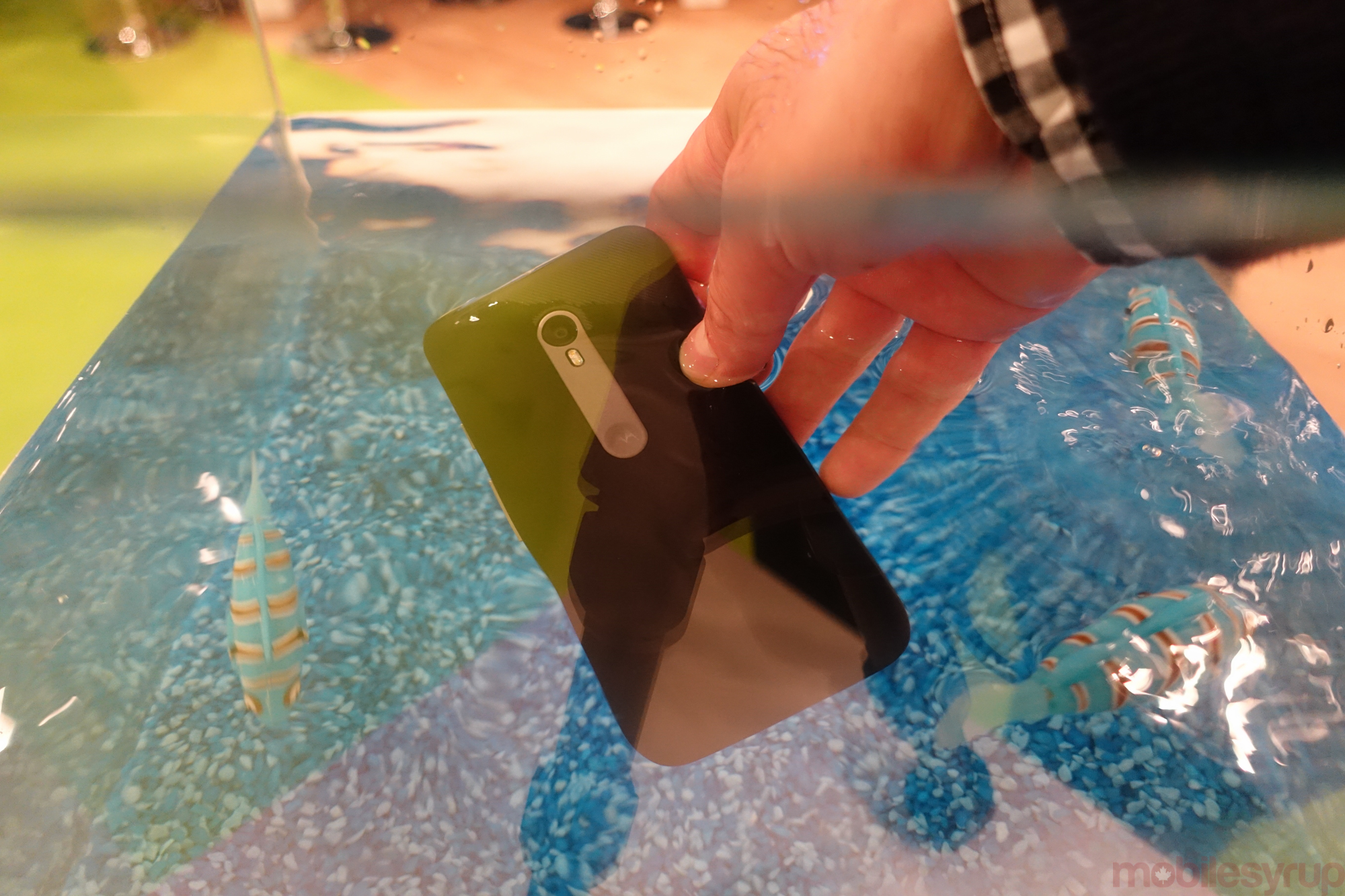