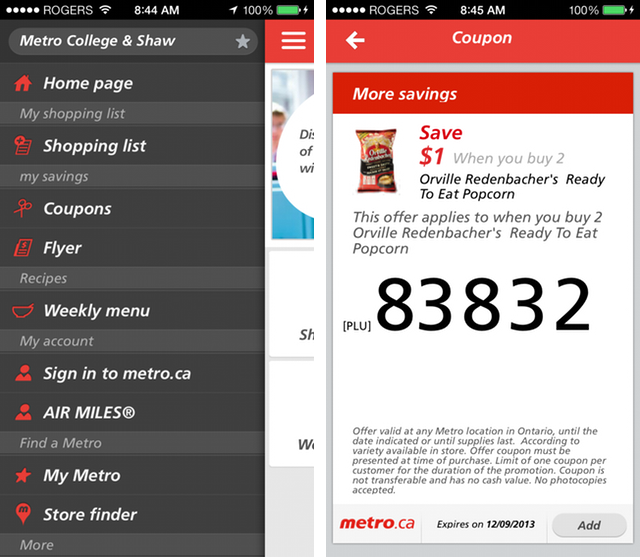 The company, which has 347 stores throughout Quebec and Ontario, is taking a multi-faceted approach to its new digital rollout, beginning with recipe ideas, flyers and itemized shopping lists, which can be synchronized between My Metro account holders, as well as in-store promotional ventures like coupon redemption.

When first launching the app, users will be asked to choose a favourite nearby Metro store, which will be the basis for all flyer deals and coupons, which vary by region. Deals from the flyer, as well as select coupons, can be added to the shopping list, which features a Recent Items tab for repeated purchases. While items cannot be purchased from within the app, company representatives claim that fewer items are forgotten, and stores are frequented more often, when engaging with the brand digitally.

Roommates and partners can share lists, and users of the Metro.ca portal can add items to be later screened on the iPhone. To make it easier when adding those items, the app itemizes them by aisle, unique to the store you frequent most. Redeeming coupons requires showing a five-digit code to the cashier, though an easier redemption method is reportedly already in the works.


The company would not commit to an Android or BlackBerry 10 app, stating that 75% of their mobile traffic comes from iOS devices. Unfortunately, unlike competitor Longo’s, there is no mobile-optimized version of the portal, so Android and BlackBerry users are forced to navigate the relatively low-functioning mobile site.