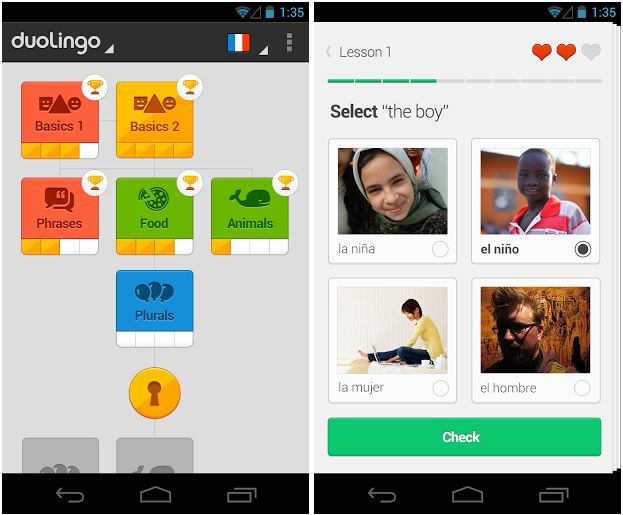 Duolingo has been around for just under a year, and offers user on mobile and the web an opportunity to learn one of six languages — English, French, Spanish, Portuguese, Italian and German — for free, with no ads or restrictions.

It does this by using your new-found knowledge, even at its most basic level, to translate existing text on the web. Basic lessons using pictures and multiple choice answers give way to more sophisticated sentence-based learning later on in the various series, but the format is maintained regardless of language or level.

The company launched an iPhone app in November and has followed up with an Android app this week, with future tablet support in the next month or so.

From my brief time learning French (yes, I stopped taking it in high school, much to my current self-admonishment) I was quickly able to pick up the flow of the lessons, and though it doesn’t quite match Rosetta Stone’s depth, it also avoids its steep learning curve.

Once you’re signed into Duolingo, you can continue your lesson where you left on iPhone, Android or the web. There’s an element of gameification to it, too, so you’ll earn trophies and rewards (which you’re encouraged to share to your social feeds) when completing a lesson or translation task.