Report: “2 billion people worldwide will own at least one smartphone in 2015” 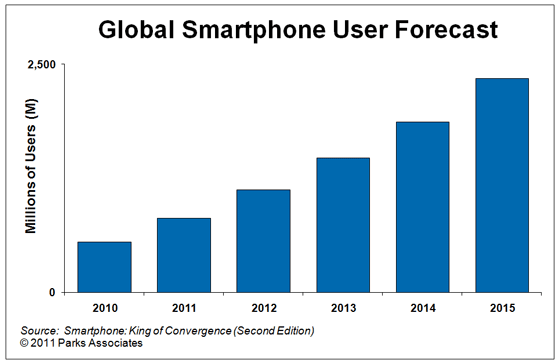 Smartphones are gaining more traction all over the world. Closer to home our Canadian carriers all recently reported that customers adoption of smartphones is increasing, for example Bell states that 34% of postpaid customers are using smartphones Rogers listed 45% of postpaid subscribers and TELUS’ Q1 reported that “Smartphone subscribers now represent 38% of total postpaid subscribers”. So the numbers are increasing in Canada and that’s only the Big 3 carriers, not their sub-brands or the new entrants.

A new report by Parks Associates is forecasting by 2015 there’ll be over 2 billion people in the world that will own “at least one smartphone”, increasing by over 175% from 2010 numbers. The reason behind this assumption is the inclusion of front and rear facing cameras for video calling and the ability to access/purchase apps.

The report didn’t break down specific country numbers but the trend is going in this direction.