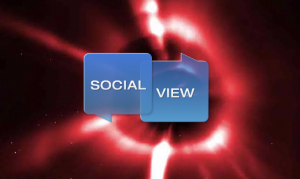 Curious to know what the upcoming Rogers “Social View” is all about? They have been very quiet about what it is but apparently an official description states that it’s “a built-in feature of these exclusive smartphones that brings together, in real-time, your contacts’ updates from popular social networks like Facebook, Twitter and MySpace. It also includes a display of recent traditional communications such as texts, calls and instant messages from your contacts. Right in the contact list!”