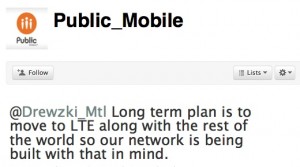 During the auction new Canadian wireless carrier Public Mobile only spent $53 million and captured a reach of 19 million potential customers in Ontario and Quebec. Public currently operates on the once unwanted and untouched CDMA G-Band spectrum. They currently offer a flat rate $40 talk and text plan and have also confirmed on Twitter that the “Long term plan is to move to LTE along with the rest of the world so our network is being built with that in mind.”

So possibly as their customer base grows so will their portfolio to eventually offering data devices.

Public Mobile opened stores a few weeks ago but there is no word on how many have signed up yet. For those who have subscribed… how are things so far?